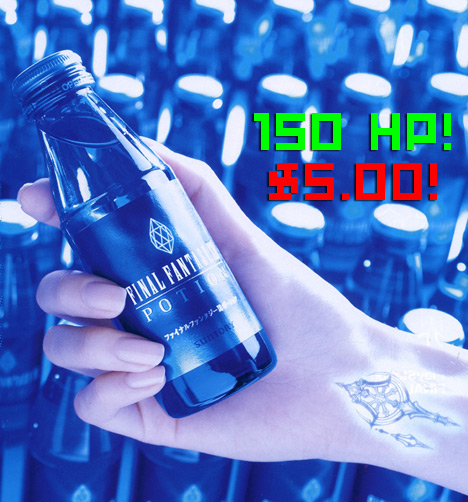 The Harvard Business Review (by way of Gamasutra) has published an editorial from David Edery, formerly of MIT, and current Xbox LIVE arcade product planner about the next wave of video game based advertising. Apparently the bean counters have found that creating a brand within a game and pushing it on the fans tends to sell like gangbusters!

He cites the recent example of Squenix’s collaboration with Japanese drink zaibatsu Suntory on a Final Fantasy themed energy drink called ‘Potion’. While the drink tasted like dead animals and terror, it was a huge hit and that success is being attributed to the cross-branding with the games. People actually WANT to consume items they have seen in games in the real world!

This doesn’t just stop at food and drinks though. Companies are planning on using the strategy to sell clothes, watches, even cars to people who either have too much money or an unhealthy attachment to video games.

Maybe I’m alone here, but outside of sporting semi-ironic video game shirts and obscure references to old SNK games, and having tattoos of various video game images on my body, I can’t see myself buying this crap. Then again, maybe I just proved myself wrong.

What about you guys? Would you buy a Katamari Damacy branded kickball or a Resident Evil branded crazy Spanish guy? Wait… actually, that last one sounds kinda awesome!