What with Shark Week and all, this probably would have been more fitting last Tuesday. Yet, somehow, the idea of writing about the NES Jaws game completely missed me until the weekend, when some friends had a conversation regarding the creature’s uncanny “love sense” in choosing victims. Take that however you want to, you’re still probably on the right track.

Jaws was a landmark film in practically every way. It created the concept of a summer blockbuster as we know it today and was the first film to have a heavily marketed, nationwide release. It also happens to be excellent, well-deserving of the praise it received due to the suspense, drama and very human characters.

Jaws for the NES was not based on that original movie, however. The flim it takes all its cues from is the fourth and final in the series,  Jaws: The Revenge. Released earlier in the same year, it was nominated for seven Golden Raspberry Awards (“winning” the category of Worst Special Visual Effects). I’m not a man who’s easily rattled by poor filmmaking and I frequently enjoy taking in a cheesy flick for a good laugh, but the climax to this film shakes me to the very core with how utterly horrible it is.

Can one of the worst movies ever made result in a good game? Read on. 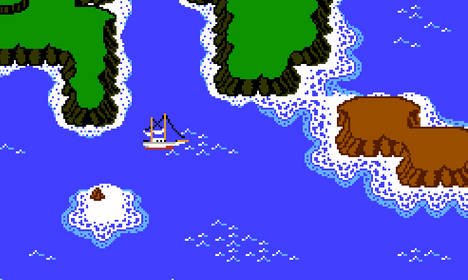 The game is, in essence, a shoot-em-up with a world map and the singular goal of destroying Jaws. You’ll start the game controlling a boat. As you pilot the craft through a fairly small harbor with a couple of islands and two ports, you’ll notice a shark fin appear from time to time, indicating Jaws’ current position. Eventually, you’ll “hit something”, either the fin or a random encounter, that sends you into the water.

Once swimming, the perspective changes to a side-view. If you’ve hit Jaws, you’ll get to stay in the boat for a bit and fire cannonballs at him until he strikes it. Otherwise, the boat will just destroy itself and you’ll be in SCUBA gear. In this mode,  you shoot spears at the three different enemy types: jellyfish, stingray and baby sharks. With the exception of the jellyfish, everything moves in a predictable manner and nothing is hard at all to kill. 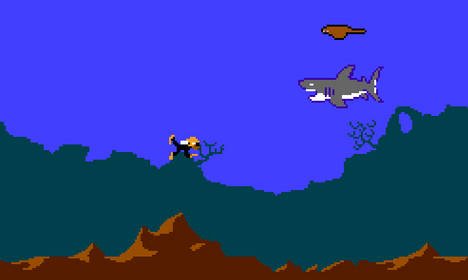 Nothing, that is, except Jaws. He’s the only thing in the game that has a health meter and it takes many, many hits to even take a notch off of it until you’ve spent a lot of time playing. Occasionally, the massive shark will arrive even in the middle of one of these the random encounters and try to eat you. Whether or not he shows up depends on how close he was on the overworld map when you switched perspectives, which is actually a pretty cool thing. But, just like everything else in the game, he’s slow and easy to avoid, so he isn’t much of a threat.

After a bit of swimming, the game will return you to the map and let you resume moving the boat around. There isn’t really much to do, though. The whole point of the map is to travel between the two ports, where you can exchange the conch shells you’ve amassed for power-ups.

The first thing you get is a tracking system that beeps whenever Jaws is nearby (just like the one in Jaws: The Revenge). It isn’t particularly useful, but it sounds cool and would build up the tension if fighting him were difficult beyond his massive amount of health. After the tracking system, however, each visit to a port just rewards you with a higher damage level at an incrementally greater cost in conch shells. 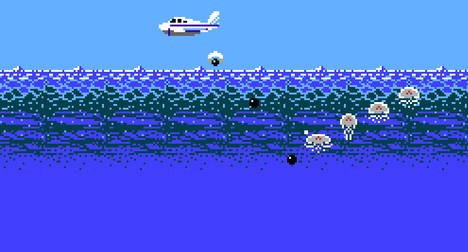 From time to time, after an encounter, you’ll be treated to a bonus stage. Maintaining the same side-view, you pilot a plane back and forth across the screen and drop bombs on jellyfish. The jellyfish move in formations, usually starting on one side and working their way to the other. The plane only turns around once it has passed the edge of the screen, so your control of it is limited to speed along. This lends the bonus rounds a level of challenge sorely missing from the rest of the game.

If all of this sounds pretty dull, you’d be right. Random encounters happen at a very high frequency, which is good for getting more shells for more power increase, but the action is so slow and uninteresting in those segments too that it quickly becomes an annoyance. There is a submersible that you can find on the map, which essentially gives you an additional hit before being killed, but not much else in terms of variety.

While the game isn’t particularly difficult for the majority, it punishes pretty severly if you screw up. Every time you die, you lose any speed increases you had, half of your conch shells, one damage level and the tracking system. Since it can take so long to get from one port to the other with all the random encounters, it could easily take fifteen minutes or more just to get back to where you were. 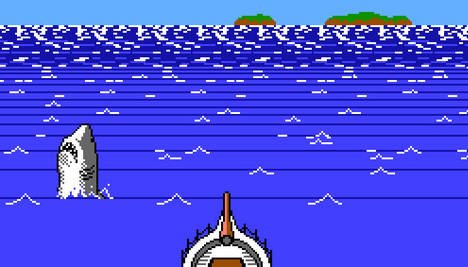 If you’re patient enough to get through all of this, you’ll be powerful enough to take down Jaws. Once his health bar is totally depleted, the game changes perspective again to a first-person view of the boat’s prow. The movie has the characters kill the shark by firing off an electrical charge which causes him to breach the water and they drive the boat’s broken prow into his midsection, impaling the shark. Then he explodes, inexplicably, like a balloon. I told you it was horrible.

The game represents this by having Jaws charge at the boat while you rotate the view to line up the prow for the killing blow. Once he’s close enough, hitting one button causes him to rise up while the other thrusts the boat forward. There’s no risk of death in this portion of the game, as Jaws will just swim away, turn around and give you another shot. Still, it’s really difficult to do. You have to be lined up dead center on him and he has to be at the very end of his run or you’ll miss. And you only get three chances to shock him before it kicks you back to the world map where you’ll have to decrease his health back to zero all over again. 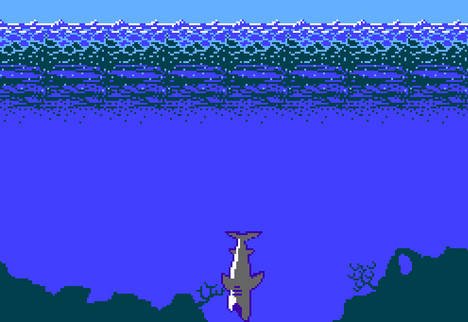 Jaws is one of those games that you could completely overlook were it not for the name. The pacing is slow, enemies have no variety, and you’re essentially doing the same boring level over and over again. Even the final sequence lacks any sense of urgency that could make it exciting, especially after you’ve failed to kill him over a dozen attempts.

It could be worse, though. At least the damn thing doesn’t explode if you succeed.