Save up lots of Lei, max out a gun with The Duke, and back out to the main menu without saving to unlock infinite ammo in the Extra Content Shop

Resident Evil Village players have discovered a sneaky trick to make the infinite ammo unlocks in the post-game Extra Content Shop less of a grind. Before I get into the convoluted setup, it’s worth mentioning that this method works best if you’ve got a late-game save, ideally right before the final boss. It’s also best if you have lots of Lei on hand— or the ability to sell everything to earn a fortune.

Before I get into the trick, you need to know how the infinite ammo unlocks work in Village.

So, once you beat the main story, you’ll unlock the Extra Content Shop. Like in prior Resident Evil games, there are challenges, some of which are tied to achievements/trophies and Mercenaries mode, and some of which are feats like beating bosses super fast, getting particular weapon kills, and so on.

You can clear these post-game challenges across any of your past or future Village runs to earn account-wide completion points. Then, in the Extra Content Shop, you can spend your CP to permanently unlock special weapons like the Handcannon and even infinite ammo capabilities.

Still with me? The special weapon unlocks are self-explanatory — note: some won’t show up until you clear harder difficulties — but the infinite ammo feature is a bit different. To even have the option to buy infinite ammo for a gun using CP, you need to fully upgrade and fully customize that specific weapon with The Duke using Lei. This means you need to have all attachments and maxed-out stats.

The step-by-step process to lessen the infinite ammo grind

Now, here’s where the trick comes in. Instead of running through Village a bunch of times just to earn enough Lei to max out your favorite guns so that you can buy infinite ammo, you can be more efficient: 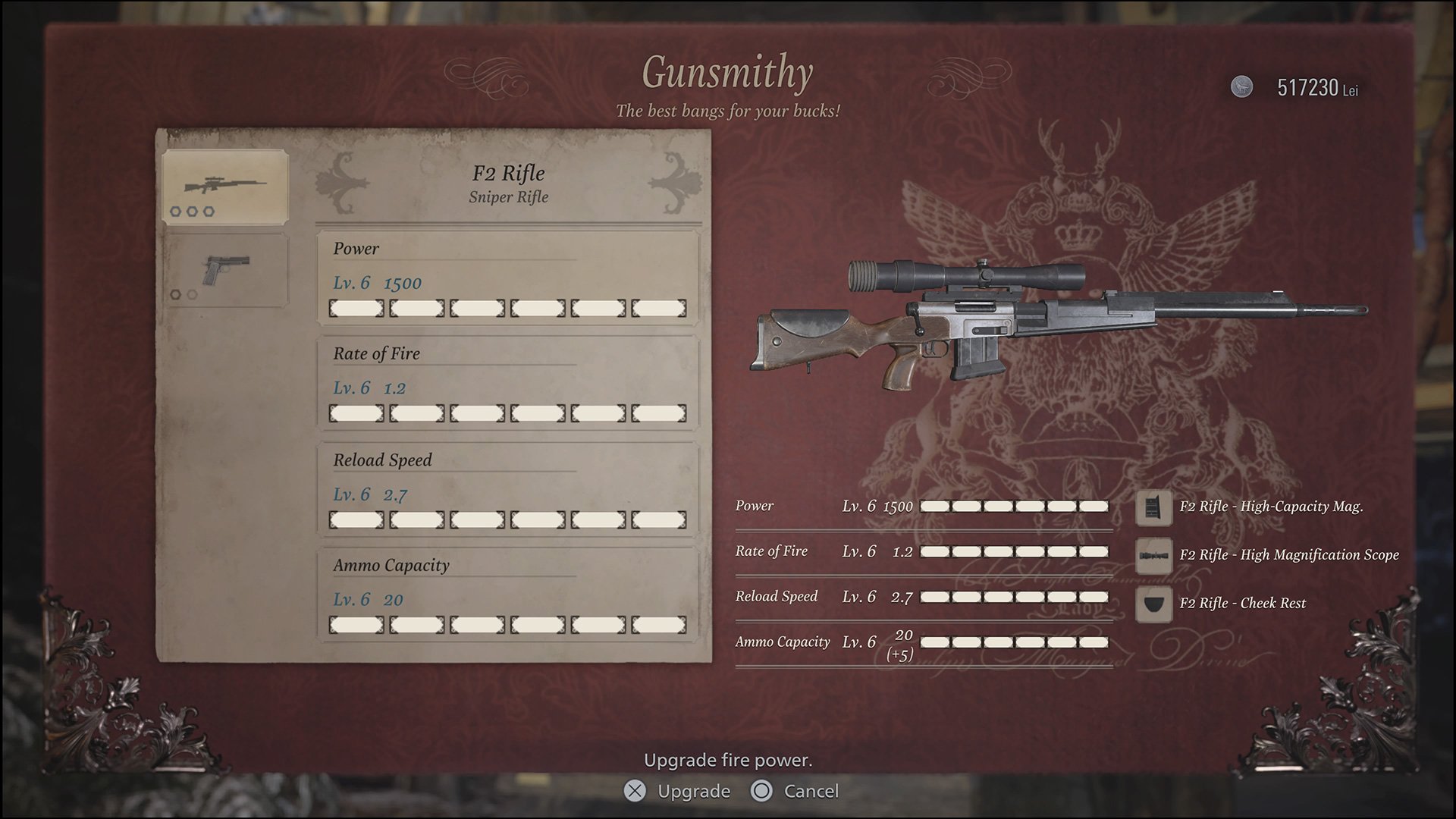 An example of a fully upgraded weapon. You’ll need to fill in all of the Power, Rate of Fire, Reload Speed, and Ammo Capacity notches, as well as all of the attachment slots before you can unlock the infinite ammo listing in the Extra Content Shop.

This method lets you make the most of your Lei, and while it has limitations — and most people probably won’t need or even want infinite ammo for everything — hey, it’s nice to have options. Of course, you’ll still need enough CP to actually buy the infinite ammo. There’s no getting around it.

In other words, this trick is more about efficiency than letting you bypass the whole bonus shop. Thankfully, you can leverage multiple saves (and reloads) to beat challenges and earn CP in a similar fashion. If it’s not too late, try to place strategic “extra saves” that you can revisit to grind ’em out.

For instance, for the Make It Rain challenge (“Get a total of 8,100,000 Lei in the story”), you can sell all of your stuff to The Duke and hit restart from the pause menu, over and over, to accumulate wealth.

Which guns should you deck out with infinite ammo first?

As for which Resident Evil Village infinite ammo weapon you should prioritize, a lot of players have pointed to the absurdly strong S.T.A.K.E. magnum, but it’s pricey as hell to max out. Instead, I went with the Dragoon first. Chris Redfield’s “favorite” assault rifle is plenty powerful on Hardcore difficulty. On that note, don’t rush into Village of Shadows — it can be a struggle even with some of these over-the-top unlocks. Good luck!

[Thanks for the no-nonsense bonus shop overview, Ruba Jaiousy]