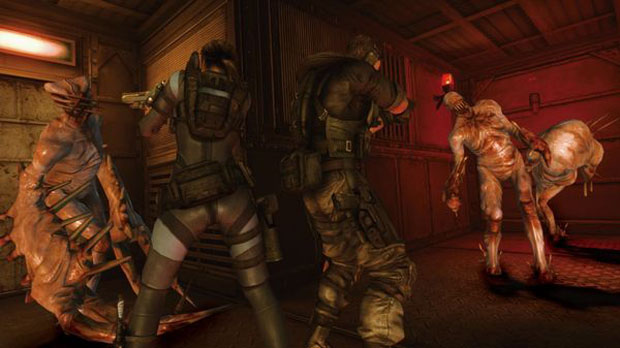 Wii U Pro Controller support too

Quite a few developers are feeling shy about Wii U development. They can’t think of anything wild and zany to do with that wacky Wii U GamePad, and apparently, they don’t think their games would be fun enough to entice consumers without said wild and zany features. Doesn’t show a lot of confidence, does it? Thankfully, Capcom seems less confused as to what to do with the thing. They’re bringing an up-port of Resident Evil: Revelations to the Wii U (as well as PC, PS3, and Xbox 360), and they’re adding some simple but worthwhile features to boot.

The ability to use the GamePad screen for inventory management carries over from the 3DS original, but if that’s not your bag, you can play the game solely off of the GamePad, or use the Wii U Pro Controller for a more PS3/360 flavored excursion.

Personally, I’m hoping they go whole hog and allow for Wii Remote and Nunchuck controls too, as Resident Evil 4: Wii Edition played like a dream. Even better would be the option to do local multi-player Raid Mode with one player on the GamePad and the other on the TV with Remote and Nunchuck. That was one of the main selling points of Call of Duty: Black Ops 2 on the Wii U, so there is a precedent for that sort of thing.

Either way, it’s nice to see a Resident Evil game that’s not a on-rails shooter on a Nintendo home console again.