Nothing says ‘immersion’ like strapping the screen to your face

While not very scary, Resident Evil 7 is a demonstration on how virtual reality can work in full-length AAA games. The game is clearly made with VR in mind, and it works stunningly well, but in my first experience with VR I was more impressed with the technical aspects of RE7 than the ability to look around. I tried my darnedest to break the game, but it wouldn’t entertain my shenanigans.

First played at gamescom several weeks ago, Capcom also brought the Lantern demo to the Tokyo Game Show, where you must avoid one member of the Baker family. There is still no full playthrough of this on YouTube, but the Resident Evil channel has a short video which highlights the main bits.

I played without VR first, and later with it. I’ll say that I did that on purpose for comparison, not because I got in the wrong line or anything. In this demo you, enter and navigate your way through a house, avoiding the clutches of an old woman. Eventually you are caught and sat down for a nice dinner and non-interactive cutscene.

You play as a girl named Mia and you start on a small wooden bridge that you must cross and enter into a house. On my first non-VR playthrough, I just skipped ahead merrily and entered the home uneventfully. However, on my second demo, this time with VR, I started looking around since this was the first area other than the VR control tutorial bit. I was blown away by just how amazing everything looked, even things off in the distance or on some random corner of geometry you typically wouldn’t look at: there simply were not any spots where they gave less effort and put in a low-resolution texture.

During my head gyration, I also looked directly behind me into a building, where I saw an old woman: the same woman who would later pursue me, known as Marguerite Baker. “Did she see me? Well, I played this already so I know she won’t co–oh shit!” Game over.

Yes, upon seeing her she shouted at me and gave chase. I died but it did not seem like an automatic death: I would have gotten away if I weren’t so busy looking at the wood textures. The best part of this is that there was no incentive or directive to look behind, and I wasn’t forced to. I simply did and that simply happened. I want to see more of this in games, especially horror games. Scripted, mandatory events are nowhere near as effective as things that happen based on player choices. 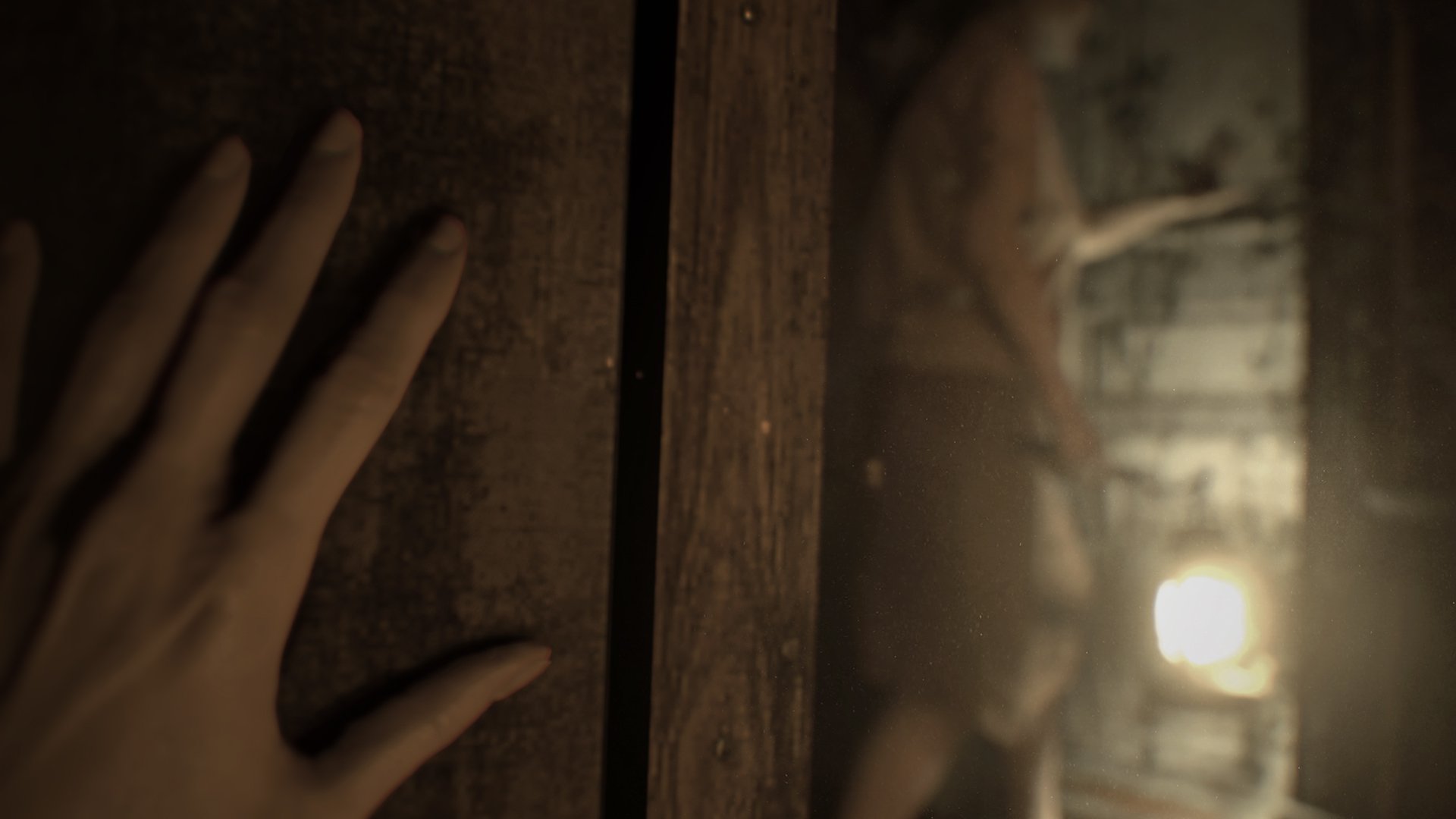 In the house, nothing happens for a bit, perhaps to get you used to the controls and environment. It’s here where I noticed there wasn’t a ton of interactivity in the world and that it’s not going to be a very open game with a lot of exploration. It was even less interactive than the Beginning Hour demo, with no drawers to open and no weapons with which to fight.

Eventually, I reached a hallway where Mrs. Baker entered non-nonchalantly. It was my first time seeing her in the non-VR playthrough, so naturally I just ran right at her. She killed me. “Hide behind the box,” the spokesperson told me, trying to make sure the press played the game right to avoid criticism and give ample time to see the whole demo.

Waiting there behind the box, you can sort of see between it and the wall, and of course you can peer around the right side as in the image above, or simply un-crouch and be completely visible. It was a standard hide-and-wait moment in the regular version. In VR, it was more interesting as you could directly look into the crack and over or around the box with a greater sense of vulnerability. She eventually enters a room and you have to go the way she came from. So of course I followed her, expecting the door she entered to be locked or the lady to have de-spawned. Nope. Door opens, she freaks out, kills me, and the representative continues to tell me how to play the game. 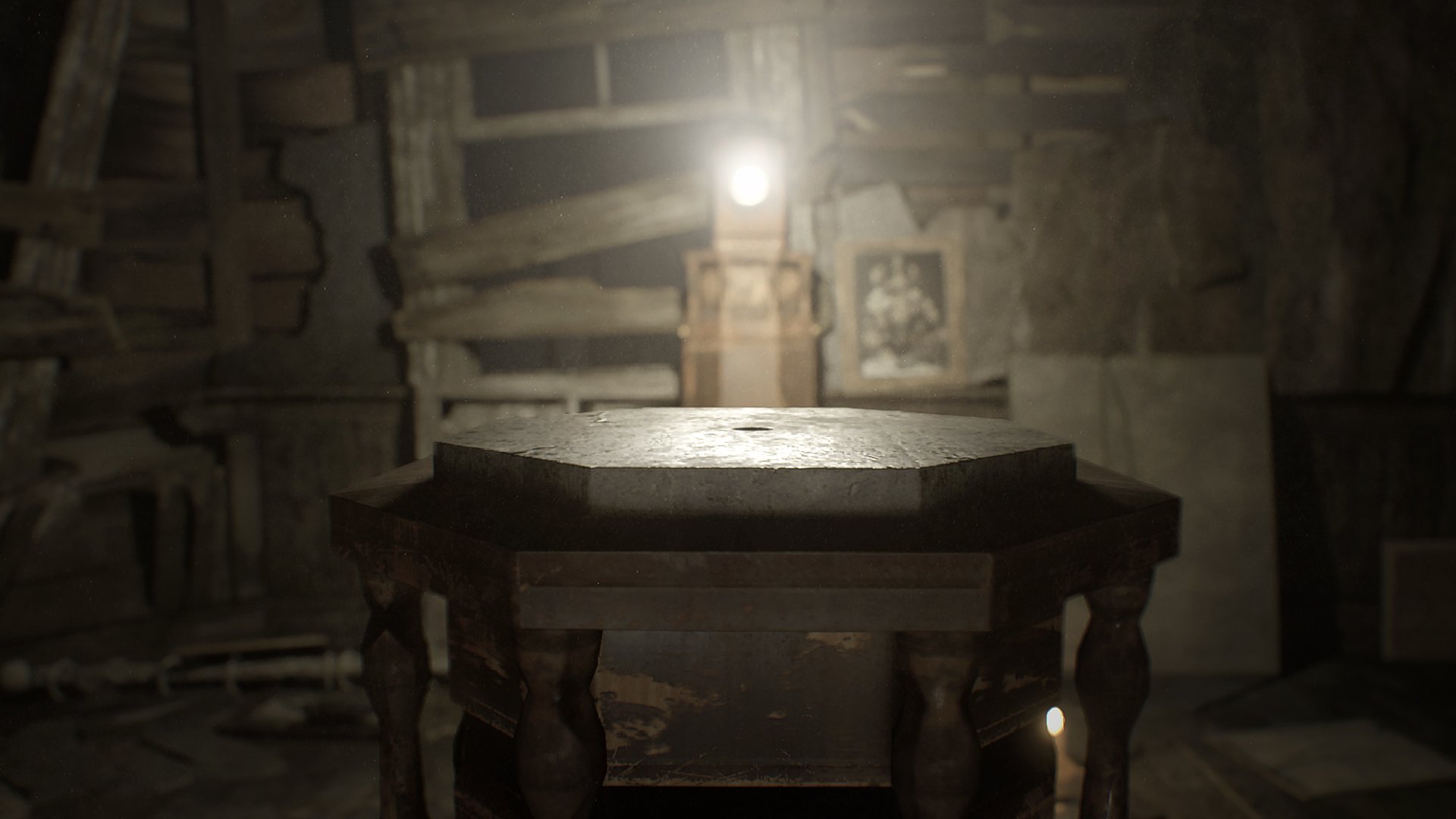 The rest of the Lantern demo involves navigating the house and avoiding her in this manner. You eventually pick up some weird stone you have to place on a pedestal in front of a projector, casting a shadow. You must rotate the stone until it matches the outline on the wall. You can use either the analog sticks or the controller’s motion control. The latter worked smoothly, but was too difficult so I used the sticks instead. It didn’t really feel like a puzzle — it was just tedious.

Although it was apparent you were doing this in real-time, Marguerite was wandering in the next room but never came in despite the door being wide open. I didn’t feel any tension. Surely she could have come in and gotten me though, right? It would be effective to have to rush to complete such a puzzle when an enemy is hunting you nearby, otherwise such a “mini-game” is pointless.

At the end, you are caught and strapped to a chair at a dinner table. This is where you “meet the Bakers,” as Marguerite and the rest of the family join you for supper with some unidentifiable food that you are forced to eat. They didn’t explicitly say it was human flesh or anything; it looked like chitlins to me. The boy throws some at you making you feel like you’re watching a 3D movie trying to justify the 3D, and the father stabs you in the face which was surprisingly not all that jarring. During the entire sequence, however, you are free to look around at whatever you want. So if you don’t want to look at yourself getting stabbed, you don’t have to. 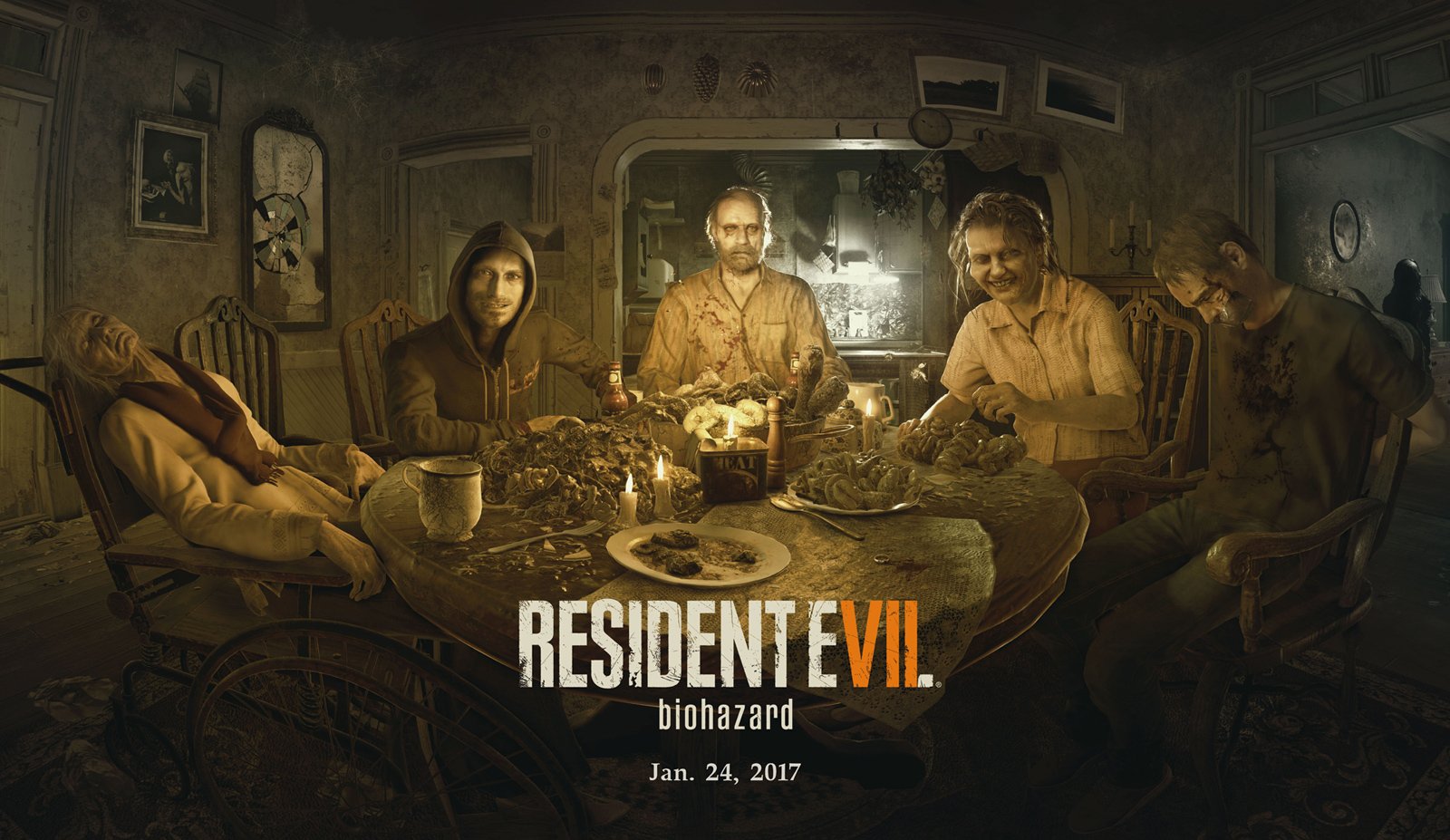 It’s been said you’ll play as Ethan in the main game who can fight using a variety of weapons. However, this demo raises the question of whether or not you’ll play as multiple characters, with some more focused on evasion rather than direct confrontation, such as in Fatal Frame 3. This would be a good experiment in seeing what works best in not only VR but also this type of narrative-driven horror game.

Previously when I mentioned the game isn’t too interactive or open, I wasn’t really complaining. It makes perfect sense: this isn’t meant to be Shenmue, and for horror to be effective, you have to have an idea of where the player is and what they have been doing until then, allowing the developers to control pacing. There’s also of course the technical limitations. With graphics that surpass anything I’ve ever seen in my life (the VR version at least) and a consistent 60fps frame rate to boot, there’s no way they could make a huge open game and have it look this good everywhere. The game size as is must be monumentally large; I’d say easily over 100GB if it truly does turn out to be a full 10- to 12-hour game. 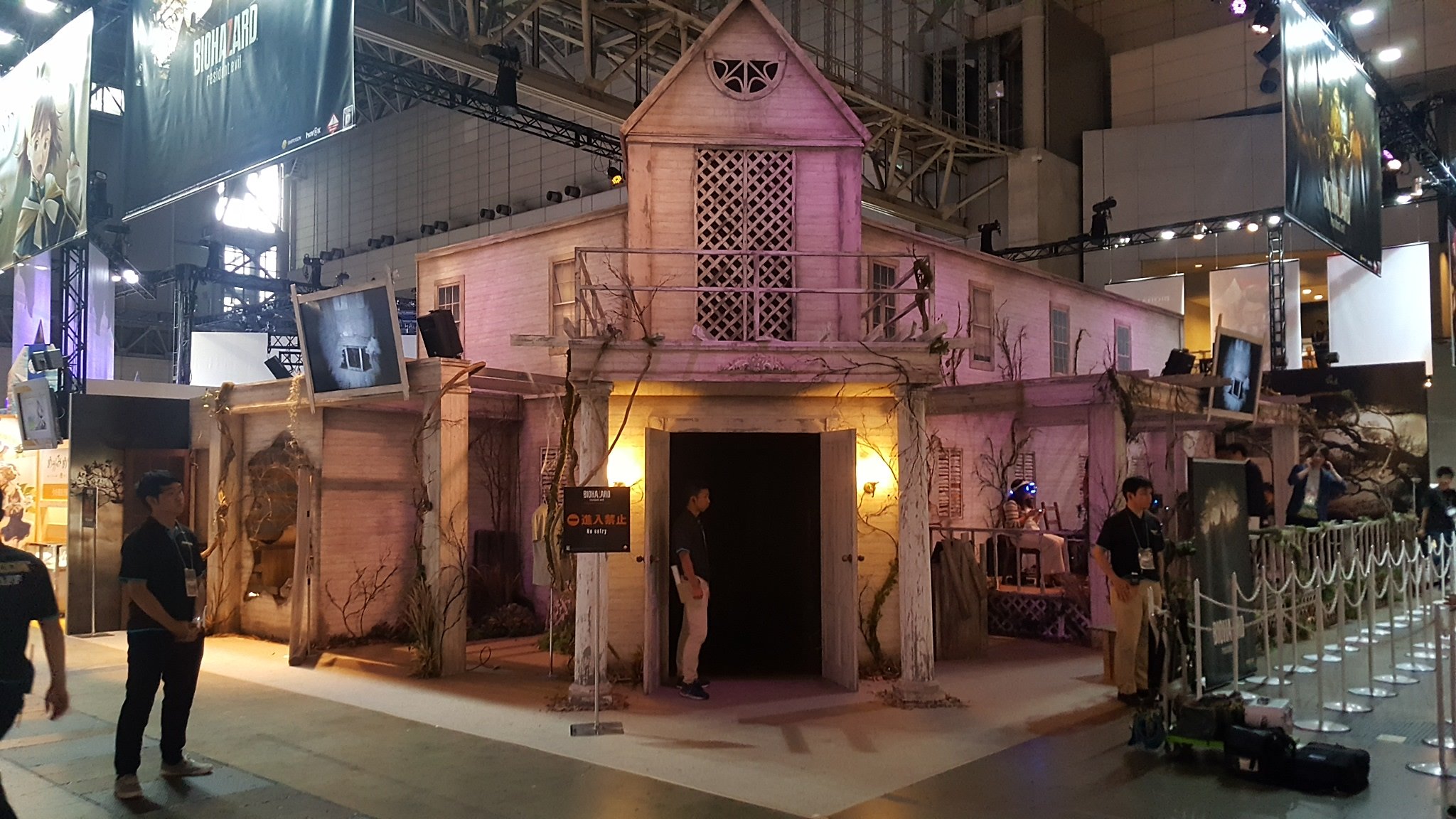 People have and will continue to compare this game to P.T., but it is not P.T. The only things they have in common are genre and setting. It would be like comparing Mario Kart and Forza Horizon, since they are both racers and take place on race tracks.

The tone is completely different: P.T. is a far more subtle degradation into hell, focused on atmosphere, while Resident Evil 7 is more direct and in your face about what is going on, such as the clearly defined and recognizable threat with a focus on characterization and story. P.T. was of course just a teaser for the cancelled Silent Hills. It’s anyone’s guess as to what that would have become, but even with actors like Norman Reedus taking on speaking roles, I have a feeling it would have remained tonally consistent with the playable teaser, more so than with Resident Evil 7.

My initial impressions on a standard television were lukewarm, but after trying the same thing in virtual reality, I felt better. I did try to shove my head through walls or doors to see if I could see the modeling or cheat by looking into the next room, but the screen simply goes black and tells you to stop goofing. You can look around all over the place, but after a few times I got tired of it, literally and figuratively. I just played the game as I naturally would on a regular TV. I tried leaning around corners to look for the lady a few times, but I felt peering around using only the controller-based movement sufficed without me having to strain my neck, pull cords, and potentially headbutt someone or something. 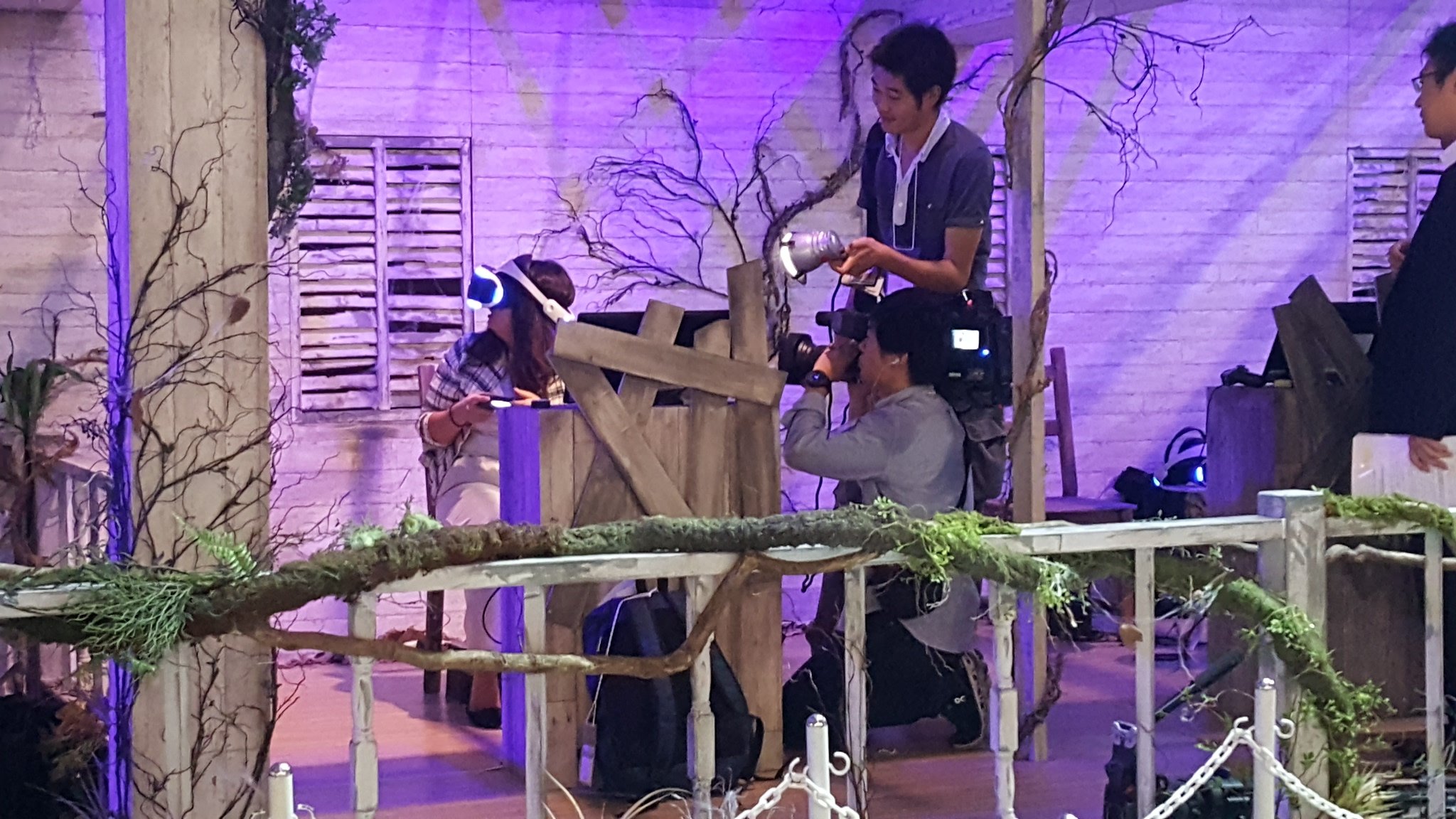 Yet, there’s something about VR I can’t quite put my finger on. Perhaps it’s the depth perception. Perhaps its not being able to look away at my phone. Though I’d say the biggest part is the pure immersion into the world that couldn’t be replicated on a standard flat TV and certainly not via a Let’s Play, even if the graphical quality, frame rate, and load times matched the VR version.

Resident Evil 7 is thus far not scary and the jury is still out on whether the combat will be fun, but this is a proof of concept. I have confidence that Capcom is holding its punches for the final game. Someone buy me a VR headset so I can play this, please?