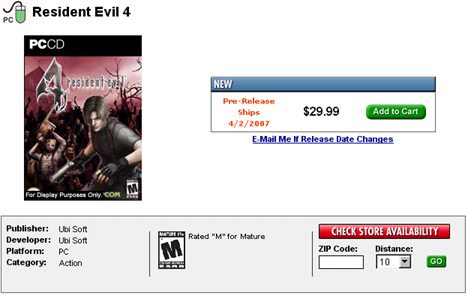 “In this latest installment of the wildly popular franchise, players are reacquainted with Leon S. Kennedy, Raccoon City’s idealistic rookie cop from Resident Evil 2. In the six years since the destruction of Raccoon City, the U.S. government has been able to destroy the nefarious Umbrella Corporation.”

You know how the ESRB website has become the place for gamers to sniff out premature game announcements lately? Well, it looks like sites like EBgames and Best Buy are looking to provide some competition in that regard. Not only did Best Buy have Duke Nukem Forever listed for a February release date for, like … forever; EBGames now seems to have Resident Evil 4 for the PC listed at $29.99.

The game is apparently being published by Ubisoft. Gamespot has it listed as “TBA 2007”. I hadn’t ever heard of this until just now. RE4 on the PC would be heavenly.