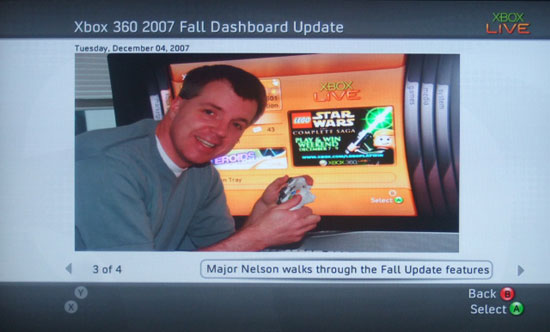 As promised, Microsoft have delivered the new Xbox 360 dashboard update today. I turned on my console first thing this morning, and after signing in to Xbox Live, was prompted to update. Like previous updates, this was extremely quick and painless.

So far, I’m digging the new streamlined interface of the dashboard, although the changes (after playing with it for five minutes) don’t seem that drastic. Of course, there’s the new stalker functionality, which I have to admit, I used once just to see how it worked. Today also marks the launch of the “Xbox Originals” collection, which will let you download classics such as Halo, Crimson Skies, Fable, and Psychonauts for 1200 MS points. There’s also a free Psychonauts theme and gamer pictures, so don’t miss out on that … I certainly didn’t.

The last thing I noticed was the new “Games Library,” which only lists games on your hard drive (arcade titles, “Xbox Originals,” and demos). Aside from listing the demos (and the Xbox Originals, which didn’t exist prior to the update), I’m not quite seeing how this is a huge change. You can filter the games (“All games,” “Arcade,” “Recently played,” etc.), but all of the lists look nearly identical, since the bulk are Xbox Live Arcade titles. Not listing retail disc-based games seems odd, and a bit silly.

I haven’t had a chance to mess around with anything else (new codec support, eh?), since I’ve got the work of the Lord to do this morning (read: I have to write about videogames). So go on, guys — fire it up, and let us know what you find lurking between the folds of the new Xbox 360 dashboard.