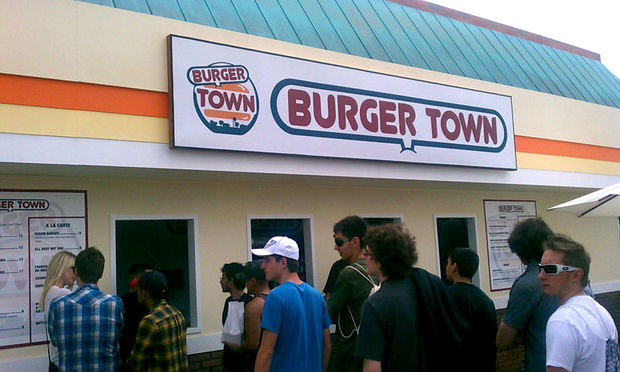 Studies show that playing too much Call of Duty can make you hungry. So Activision has built up a real life Burger Town — the phony fast food chain that has appeared in the games — at its Call of Duty XP event in Los Angeles this weekend.

The food station (one of very few available at the event) is not only home to tasty burgers, but also long lines. Fans waited upwards of an hour to get their hands on Burger Times greasy treats. One fan described the burger to me as “pretty good.” Considering the price of the goods, “pretty good” isn’t the most glowing review. Only available as combos (with fries and drink), prices start at $12. For comparison, the “Burger Town Classic Burger” as it appears in Modern Warfare is listed as $5.99.

While the Call of Duty XP $150 entrance fee will go directly to the Call of Duty Endowment non-profit organization, the proceeds from food will not. I was told that Burger Town was being handled by an outside vendor, so any money made off off a “Burger Town Double Burger Combo” wouldn’t be going to Activision or the non-profit Endowment.