Not the Wild Wild West

Robots are sentient and coming at you and your co-op partner from every direction. You must work together to kill them all with a plethora of guns and a badass sword that can reflect projectiles. No, it isn’t I, Robot 2: Bad Boys, it’s Raw Data, a VR-exclusive first person shooter.

Before arriving at PAX East, I asked around the internet to see what VR games I needed to check out at the show and Raw Data came highly suggested. But does it live up to the hype?

The entire demo took place standing side-by-side with a virtual partner controlled by another player. We fight for our lives as crash test dummy-looking robots attempt to murder us. By using the Vive’s room-scale VR and its unique controllers, we grabbed our guns from virtual holsters on our sides, and unsheathed our swords from over our shoulders. These specific gestures to draw weapons felt natural enough, although though putting a gun behind your back to reload didn’t make much sense. Guns were aimed very much like you’d expect to aim a real one, and it felt so realistic I found myself closing one eye to get a better aim, just as you would in real life. Oddly, it seemed to help.

Combat takes place in waves, with an opportunity to spawn new weapons, such as shotguns and bows, between rounds. I ended up grabbing a shotgun that required pumping my controllers in the air like the real thing. While doing the motion certainly helped with immersion, I did hit the controllers together hard at one point while trying to frantically reload… 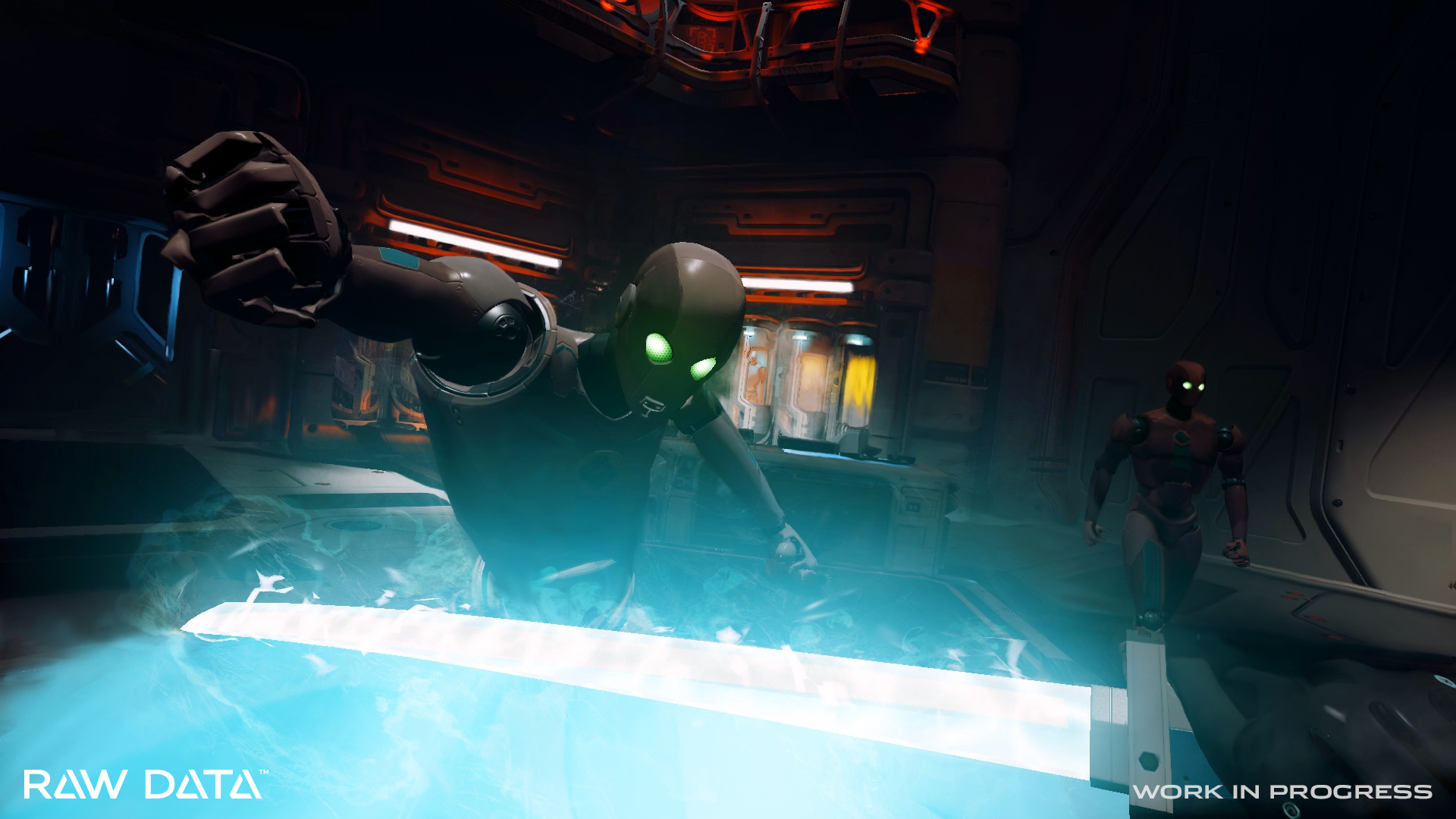 Developer Survios mentioned a few disabled players that had demoed the game, one in a wheelchair and another with one arm, and noted that surprisingly both were able to play without issue. Survios was, however, concerned about the blind lady in line behind me; I wish I would have stuck around to see how that turned out.

As my very first experience with the HTC Vive, I walked away impressed; the aiming is tight, the gunplay was fun, and the ability to high-five your partner who may be half way around the world was charming.

Currently, Raw Data is still an early alpha build and will be hitting Steam Early Access sometime this year for HTC Vive. The developer promised a more fleshed out experience and said the build I played was closer to a tech demo than a real game.

It certainly got me excited for the future of video games, especially with room-scale VR. Bobbing and weaving to dodge bullets and get the perfect shot was a hell of a good time.

[Correction: The original version of this post stated that Raw Data would be coming to the Oculus Rift in error, though the developers did note they are looking into it.]