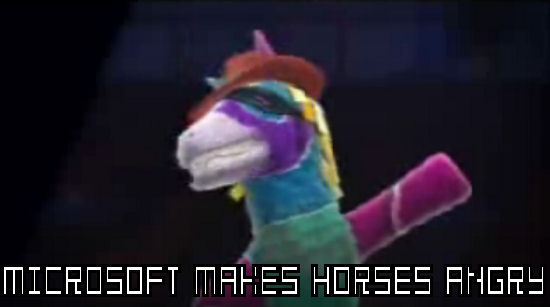 Viva Piñata is a game that many people adore and yet it didn’t do very well at all. According to Rare’s James Thomas, Gears of War and Microsoft’s marketing strategy are to blame. The two titles were set to be big Christmas releases, but while Gears was promoted out of the arse, there was sadly no room in the budget to give Viva Piñata the exposure Rare felt it needed.

Most interestingly I think from our point of view, it was interesting to see how the marketing budget was split last Christmas, because obviously everyone knew that Microsoft were publishing Gears of War and Viva Piñata. Yet, so much of the money went towards Gears of War, which is going to sell millions anyway. It was a bit of like, “What about the other franchise?” I think we got left in the wake somewhat.

Of course, Microsoft is now keen to get its hands on some of Nintendo’s ‘casual’ market (as stupid as that buzzword is) and will surely do a lot better in the future, but there’s no denying that with more promotion of the Xbox 360’s less gritty titles, it could shed that irksome ‘shooter box’ stigma a lot faster.

I think, however, the biggest irony is that whenever I play Gears of War online, one of the most popular juvenile insults heard is “Go play Viva Piñata.” It would seem that the game does get all the promotion it deserves … from the very game that took its marketing budget.

Filed under... #Gears of War#Rare