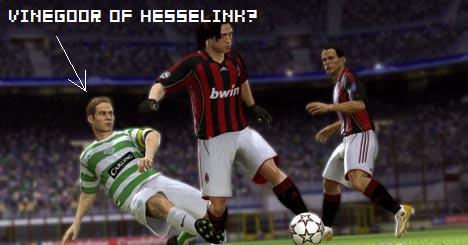 Disclaimer – The game is called football, since you play it with your feet. Anyone who disagrees can go get bent. Pictured above is who I hope is Jan Vinegoor of Hesselink, who has the best name in football and awesome goals to match.

Oh EA, how you rival Squeenix and Pokemon in terms of crappy spin-off, cash-grabbing, games. I’ll be the first to admit that I have a soft spot for FIFA games. I find them much more gratifying that most other sports games. That being said, I’ll be the first to criticize EA for making another weak addition to the FIFA franchise.

For those who don’t know, the UEFA Champion’s League is the professional football tourney. It takes the best teams from the European Leagues and pits them against each other in a huge tournament. Apparently, EA is releasing the latest FIFA game to take you through the most epic of tourneys. The game will be released on the PS2, PSP, and Xbox 360 and will feature “almost” all of the teams that qualified for the Champions League.

That was red flag number 1. Glad to know that this game will be thorough.

I predict that this game will be, like most of EA’s sports franchises, a rehashed Road to the FIFA World Cup, which was, in turn a rehashed, repackaged FIFA 06. The problem with Road to the World Cup was it was just the Road. No actual World Cup. Not to mention that there were only a handful of teams to choose from, as opposed to the shitton (roughly 2.15 asstons — seriously, 300+) of teams to be found in regular old FIFA 06. There weren’t any new modes, or gameplay features, or extras. There simply wasn’t enough game in that little green box to justify the pricetag.

With their UEFA game, EA is again giving us a game with less content (only 80 teams qualify, and even those won’t be included) for the same price. What they should do is release a standard FIFA game with the hundreds of teams and let the players organize their own World Cup and UEFA tourneys. Let me build myself a bracket depending on real life events, and then let me invite a few of my other football-crazed friends so we can duke it out. Don’t give me another watered down game with no new gameplay, features, or extras, slap the UEFA logo on it and make me shell out $60.

[News and pic via thebbps]