According to the NFL, about 40 million Americans watch football on a regular basis; around 20 million people play some form of fantasy football, and EA Sports’ Madden NFL games sell between 3 and 5 million copies each year. So obviously, there exists a huge gulf between the people who enjoy football and the folks who go deeper with their love of the sport through some kind of game.

Quick Hit Football seeks to address that segment of the population — as the game’s Director of Design, Brandon Justice, told me last month, “We’re trying to build a football game for people who like football, but don’t necessarily like football games.” (That’s you, Destructoid readers!) Quick Hit is an online, Flash-based, free-to-play football game that’s perhaps best described as a strategy RPG: you create a team and play football games with it as its coach, handling all the playcalling duties, and you earn experience points with which you can level up your players.

Just as there’s a sizable segment of football fans who don’t play football games, there are plenty of people who do play online “casual” games — the kind of simple stuff you’d find on sites like Kongregate and AddictingGames — and Quick Hit is looking to capture part of that market with a much deeper experience. Hit the jump to learn more about it. 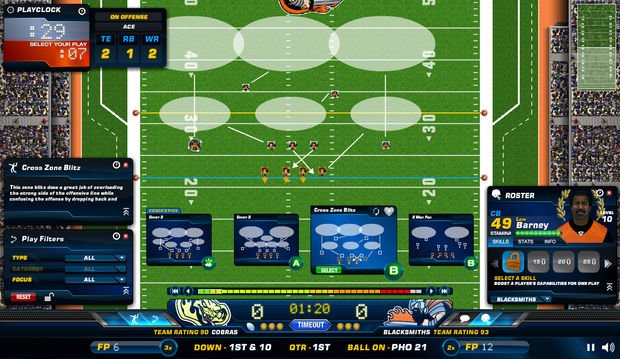 I met with Justice and Samantha Smith, the company’s Director of Communications, at a Starbucks in New York City. It literally took us fifteen minutes just to get the Wi-Fi up and running, and Justice promised that “it’s easier to get into a game of Quick Hit, I’ll tell you that.” Sure enough, you can go to quickhit.com right now and set up a team within a few minutes — just pick a name, a logo, colors, and fill in a biography to tell opponents what your team is all about. The game will give you a full team of players, each with his own experience level, and you, as the team’s coach, will have a coaching level.

The Quick Hit team is made up of developers who have experience with sports games (Madden, NCAA Football, NBA 2K, NHL 2K, NFL Tour) and others who have worked on MMORPGs (Ultima Online, Asheron’s Call, Dungeons & Dragons Online, Lord of the Rings Online). That combination has led to a game that is designed to satisfy football fans and fantasy football players, but Justice made sure to note that the key philosophy behind Quick Hit is accessibility. EA Sports released two NFL Head Coach games, but they were largely sterile experiences that were built for the most hardcore of Madden players: the Franchise mode stat-heads who wanted to manage their players rather than control them on the field. 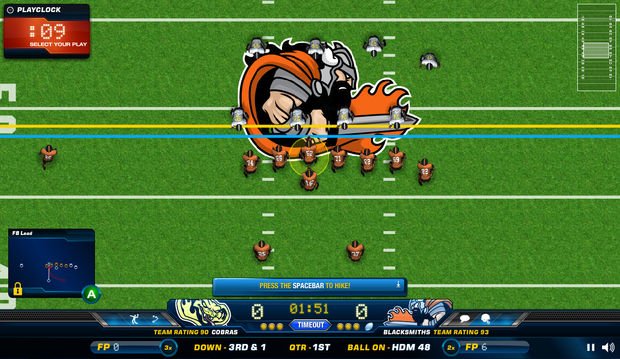 Quick Hit offers a similar kind of experience, but it’s a much less esoteric and complicated one, and you don’t need to buy a videogame console to play it. Once you’ve created your team, you can take on one of 27 different CPU teams. Some of the teams are led by former NFL coaches; Quick Hit has signed legends like Bill Cowher and Jimmy Johnson, as well as former NFL players like Barry Sanders and Kordell Stewart, to lend some authenticity to their game (you’ll eventually be able to purchase these legends for your own team). In addition to playing the computer, you can also jump into the game’s multiplayer lobby and face a user-controlled team; Smith told me that there are usually about 200 people in the lobby, and the number jumps to two or three times that number on the weekends.

When I asked about microtransactions, Justice was quick to note that you can play the game and earn stuff through it, or you can buy it — but because the game’s matchmaking is based on skill and not experience, you won’t be penalized if you don’t spend money. If you decide to buy a legend, for example, your team rating will go up, and you’ll get matched against higher-level teams even if you haven’t put as much time into the game as them. Smith mentioned that the top 20 players have played for, on average, 200 hours; accordingly, the developers have placed a great deal of focus on the community. The development team recently released an update to the beta that added features that the community had been clamoring for, such as the ability to pause games and a system for punishing quitters.

The game itself shows an aerial top-down view of the field, and it renders full 11-on-11 gameplay. This is a strategy game at heart, but there’s more to it than a calculation on a server somewhere: you call the plays, and you see the action unfold on the field. As you play more and more games, and you get attached to your players, you become more and more invested in their success or failure — just as in any RPG, like Fallout 3 or the Road to the Show mode in Sony’s MLB The Show series. You feel pretty damn cool when you make the right calls and score; there’s a great “I did that!” feeling that’s very rewarding. 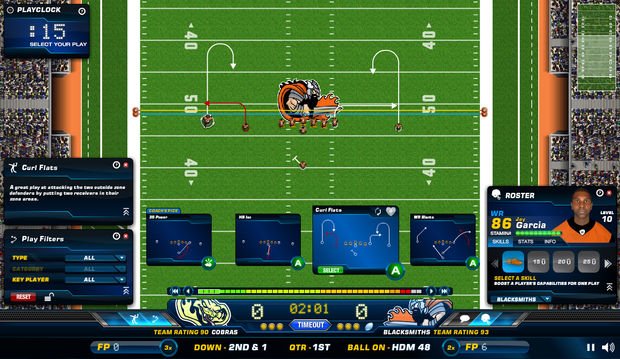 Perhaps just as significant is the game’s potential to teach users about the game of football. Just like gamers who have spent two decades playing Madden have built up a considerable knowledge of the football, Quick Hit will help you to better understand the sport itself. I didn’t know what a Cover 2 defense was before I started playing Madden, and I couldn’t tell a fly route from a curl. Football watchers may be familiar with such terms on the surface, but since the playbook in Quick Hit allows you to see what your players will do when the ball is snapped, playing the game will help football fans learn more about the sport they love. And who doesn’t love being an armchair quarterback, yelling at the TV that the coach should’ve called a quick slant on third-and-short?

Of course, Quick Hit isn’t trying to compete with Madden. And Justice acknowledged that longtime sports videogame players are perhaps unlikely to enjoy a less interactive game that offers substantially less control over the outcome of a play. But football is just as much a cerebral game as it is a sport based on athletic talent, and Quick Hit’s strategic approach is both faithful to the sport and accessible. Justice said something that day that stuck with me: “This is really a game for football fans, more than anything else.” Whether you spend hours every week analyzing football games to figure out whom you should start on your fantasy football team, or you watch your favorite team every Sunday, you might want to give Quick Hit Football a try. 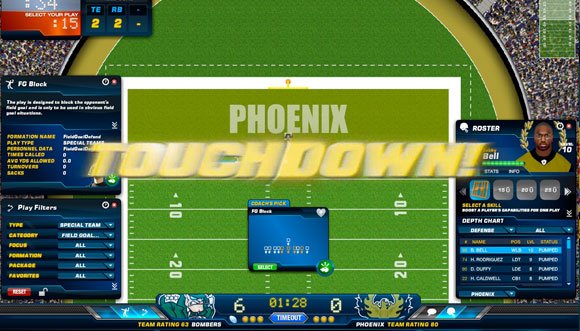 Quick Hit Football is currently in a public beta at quickhit.com. At this time, it requires you to install Adobe Air on your computer, but the team is working on a browser-based version of the game that you won’t need to install at all; they hope to roll it out later this year.