I last previewed Quantum Break at E3 2013, a lifetime ago, and had my reservations around the interlaced television show aspect that must have come from Microsoft’s then “sports, sports, television” strategy that saw the studio trying to create a host of original programming (the same era bore Kinect-shackled Xbox Ones at too high a price).

Now here we are, four years after work on Quantum Break started at Remedy (Max Payne, Alan Wake). And I still have my reservations about the live-action television program, which I’ve seen one episode of (it’s fine, but kind of boilerplate network gun-thriller stuff). There are four in total (22 minutes each) that separate the games five acts.

Each is focused on the bad guys, the super corporation Monarch headed by an aged, future version of the protagonist’s old friend (Carcetti from The Wire and he’s in Game of Thrones I guess) and each is preceded by a gameplay section (also starring the bad guys) wherein you make a major decision that affects the live-action footage you see and beyond. 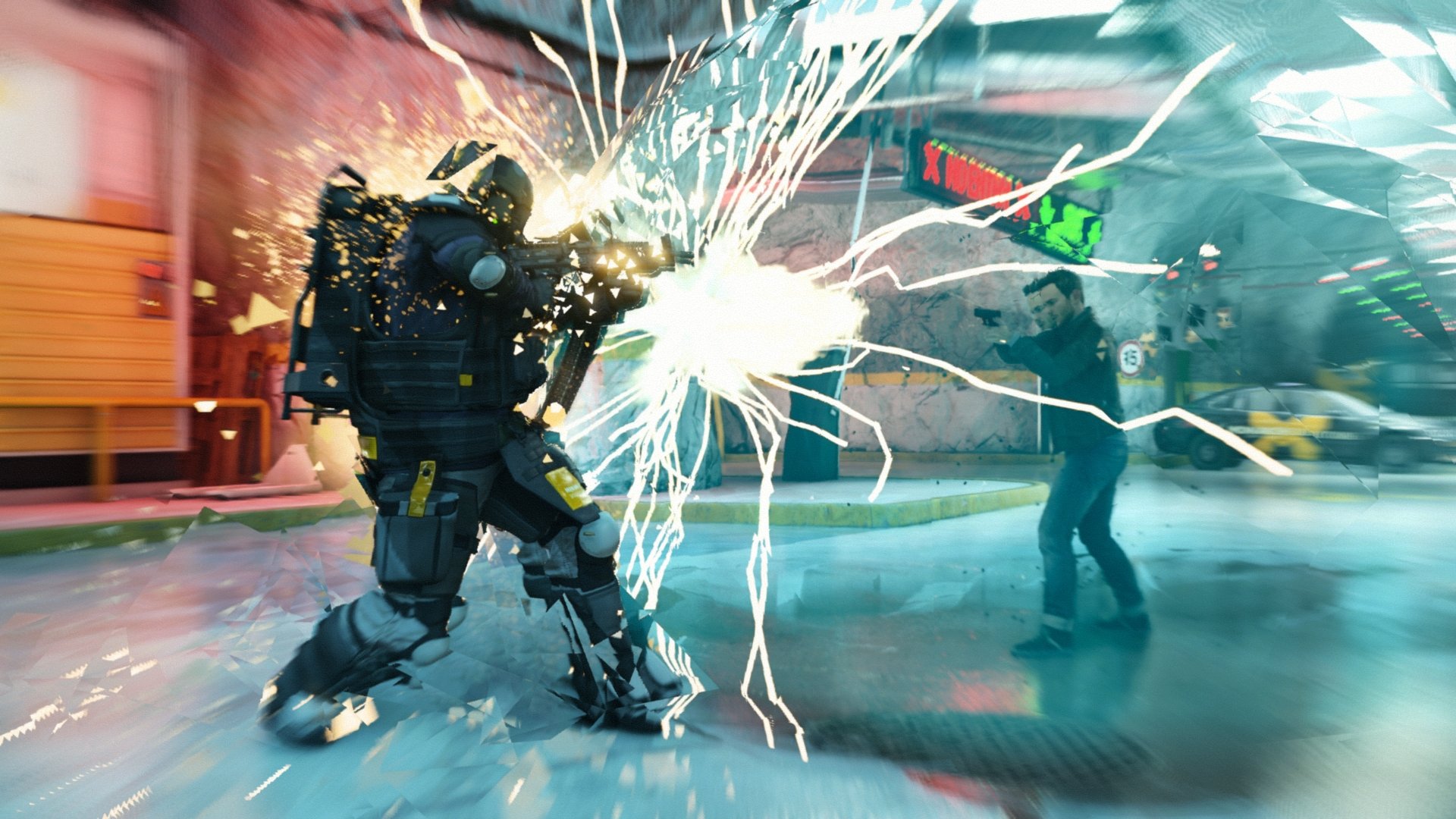 Because big bad Paul Serene has more advanced times powers, you can see how these “junction” points will generally go before making your decision. The first involves silencing a witness to the university lab explosion the easy way (murder) or the hard way (an orchestrated PR campaign, having her make falsified statements and encouraging her continued loyalty with the threat of murder).

Remedy PR head Thomas Puha calls Quantum Break “the ultimate Remedy game,” which doubles down on the studio’s love of live-action while fitting the mold of a, “stylized, cinematic action game.” The studio might not have made Max Payne 3, but Alan Wake‘s psychological thriller bent didn’t dull Remedy’s pure action sensibilities.

Quantum Break does indeed feel great, which speaks to Remedy’s “feelings over features” mantra wherein they “come up with the story and universe” and build the game out from there. It’s probably a different approach than most AAA studios, but most don’t get to work on one pet project for years at a time these days, either. But, hey, Finland, where Remedy is based, is “weird,” according to Puha. “We drink a lot, it’s dark most times of year.” He then threw on a behind-the-scenes studio video that featured Sam Lake in a sauna and was legitimately chuckle-worthy.

Seriously, though, goodbye cover-based shooting, a relic of 2008-2014. I’m singing “Return of the Max” in my head right now. Sure there’s no dive, but there is a sort of quick teleport that automatically triggers bullet time slow motion. It makes for a lot of good zipping around areas a la Vanquish.

In the few hours I played I still felt there was a skill ceiling high above me, which is rare for shooters, which tend to be mechanically similar. But here the combination of techniques available and dogged AI (after the intro act I took some deaths on normal) means there’s a lot more you can do if you put the effort in, even if you could effectively fumble through the game gracelessly playing it like a typical third-person shooter with organic cover options.

Aside from the dash there’s a sort of time grenade (with an extra powerful charged version) that lets you briefly freeze folks (or environmental puzzles) to deal with later, or shoot at the time anomaly for extra damage to those trapped within. There’s also a short-lasting bubble shield, good for when you’ve got yourself into a pinch. Time powers even give the kid from X-Men something akin to “detective mode,” but, graciously, it can only be triggered while still, so it doesn’t encourage you to play through the whole game with a monochrome, ugly filter on. Plus, a later update will automatically trigger this Time Vision whenever you use other time skills, organically highlighting enemies and destructibles without an additional button press (or painting the entire scene gray).

This is all some top shelf action game shit, complex and fluid. Carrying all of my reservations into Quantum Break, the gunplay impressed the hell out of me. And while it’s hard to judge a story based on an act or two, the writing and performances were solid so far. The live-action bit, as mentioned, is a bit boilerplate network drama and action, but Puha brought with him a message from a now-vacationing Sam Lake (the game is done, it’s just the Windows 10 version being finished), “things that people look at as cliches, Remedy thinks of as classics.” So while the Fringe meets [some other dumb TV show people like] thing grates a bit for me compared to Max Payne‘s knowing-noir or a game with a writer whose name is A. Wake, it might hit a popcorn-y spot for others.

The game is also rife with environmental story-telling, demarcated as “narrative objects” (which you can even see a collectable list for) that will offer more background for those interested. They’re noted with a simple, but readable triangle icon. But more important to me than these canon, world-building details are the other, unappreciated ones. 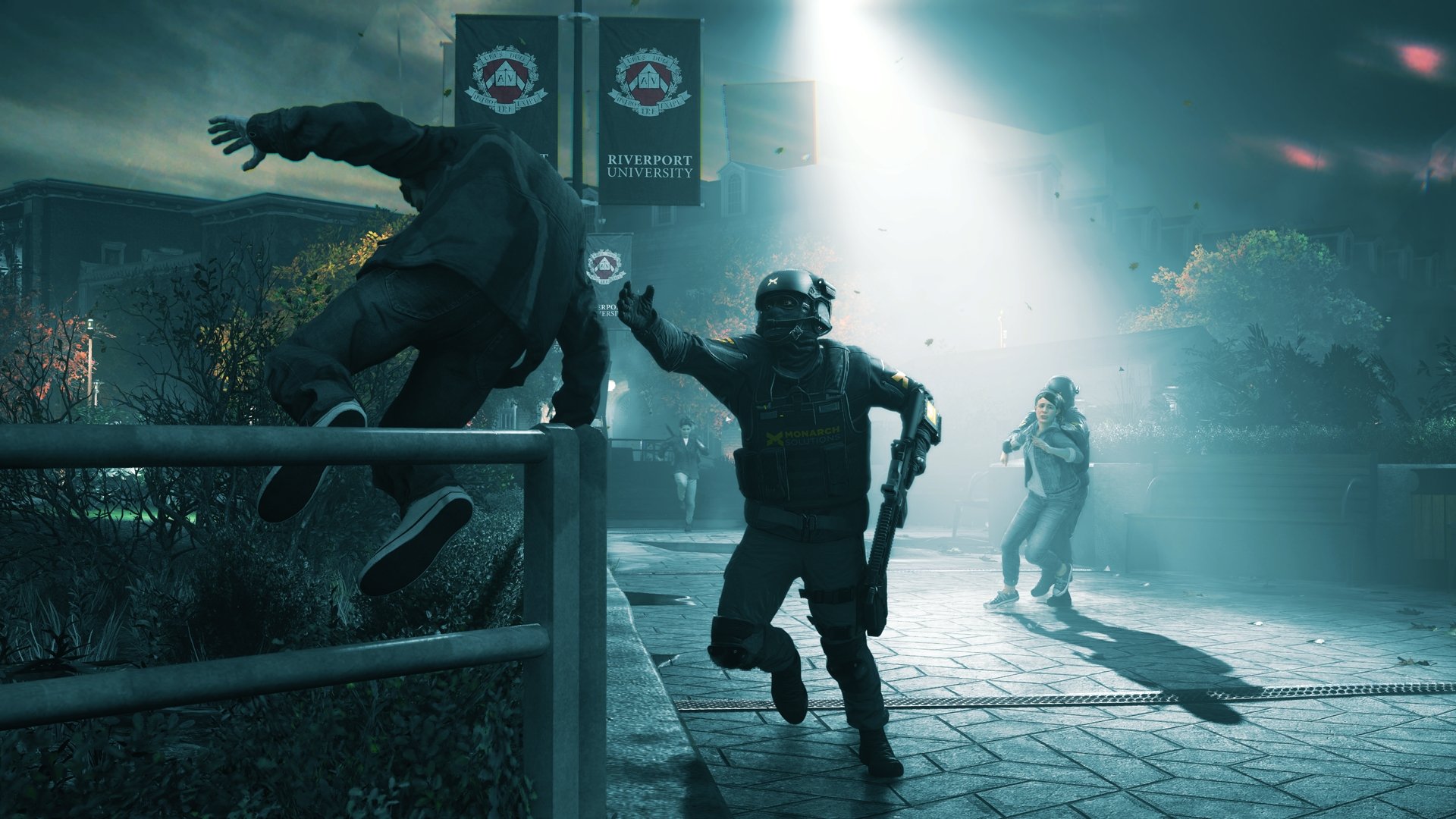 There is graffiti in a lot of video games. Most of the time, it’s stupid. The Last of Us was an easy, recent offender, filled with graffiti written in a clean, readable type and almost always about the specific situation the game is about, rather than some cat drawing art or tagging a name. Quantum Break is filled with realistic graffiti.

You can see the buttons and stitching on protagonist Jack Joyce’s shirt. Young, rich, pre-villain Serene walks around in khakis and a metal band shirt like an analog to Christian Bale’s The Big Short character. Cardboard boxes — cardboard fucking boxes — even have the arcane hieroglyphs only postal workers and truck drivers understand. The level of environmental and texture detail is off the charts. It’s almost dangerous because I want to read every single bit of text in the game, even if it’s a mustard bottle label or cash register display ($1.07, by the way).

I can’t imagine how good the finished product is going to look running in 4K in the Windows 10 release (there are ways to get both for the price of one, plus various free copies of Alan Wake, most of which is pre-order tied), though I only messed with the Xbox One version. For the high level of detail, there does seem to be a weird filter over the game that’s like one part film grain and translucent that seems to have been a stylistic choice — I don’t mind it much.

There we are. I went from side-eyeing it all those years ago to, eventually, completely disinterested, to reasonably excited and hopeful. My hands-on suggests, at the least, a piece of pulp fiction that could be a benchmark shooter in 2016 even if you aren’t into some of its set-dressing. We’ll find out when Quantum Break launches April 5.

[Note: the four, interspersed live-action show episodes are streamed to your Xbox One or PC after you finish each act of gameplay. There is an alternative to that: you can download all the potential episodes all at once (if you have the space) as DLC.]