I drove up to QuakeCon expecting a great Doom 4 reveal. Not Rise of the Triad. On the way, a couple thoughts occupied my mind but mainly, “Everything that defines the original Doom games at this point are so based in archaic game design that no sane developer would bring those ideas to the market now.”

Well, call Interceptor Entertainment insane because that’s exactly what they are doing with its Rise of the Triad reboot. Keycards, large open maps, and the endless slaughter of Nazi-occult are what ROTT was all about in 1995. And it’s what it’s all about in 2012.

Though I only saw the first level of the game, I get a sense that for every room of a ROTT level you recognize there will be one that you don’t. Interceptor is taking the original levels as a blueprint and consulting Joe Seigler, who was a level designer on the original, but they aren’t limiting themselves entirely to the original maps. The same is true of the bosses which will find familiar faces who will have new advantages on the player. These encounters will come down to a lot more than just “shoot the guy in the face.” It will be more like “shoot those two generators while dodging obstacles and then shoot the guy in the face.” 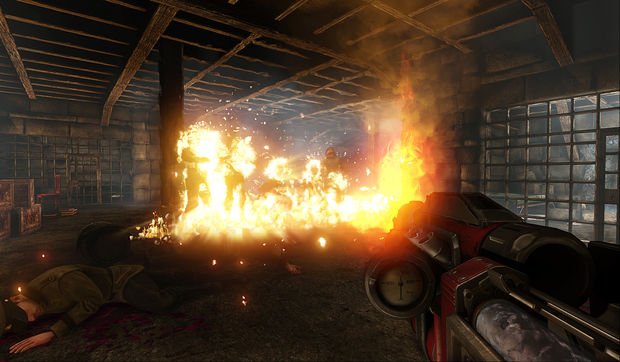 Though nostalgia is key to the project, Interceptor are trying to do something more than a pixel-by-pixel recreation. Some changes are for the better while others are just kind of neat. The flamewall is now consistently confined to an area, instead of stretching across any space. Don’t worry: You can still mow down enemies with it and cause other players to swear like sailors online. Coins are still collectable and make an appropriate arcade-like sound when picked-up. The developer is working on a novel multiplayer mode where players retrieve coins for their team but drop them all (a la Sonic the Hedgehog) when hit.

The wonderful quirks that defined the original ROTT will return. Maps will still be filled with secrets, you can play the game on holidays for Easter eggs, and enemies will beg for their lives. And, yes, the game is still full of jump pads but they have been redesigned by an electrical propulsion engineer who is friends with the developer. As a result, they look a lot less silly even though their application and placement remains nonsensical.

At the start of the game, you can choose between five characters that each have their pros and cons. For example, one character may be able to sustain more damage but will be slower, making him a poor choice for speed runs. The cheesy one-liners of the original will remain, but there will also be contextual dialogue inspired by Uncharted. You can toggle between the original’s sound and music or the new re-imagined version at any time. 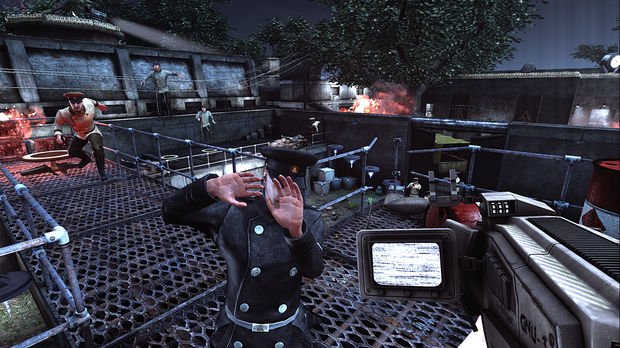 Considering it took the developer five months to get to this point, I think it will take nothing short of a miracle for them to make their Fall 2012 release window. Nevertheless, the developer isn’t shy about talking DLC. Free DLC that is, including various weapons packs. There will also be an expansion pack based on The Hunt Begins shareware. The game will also be fully moddable via Steamworks.

Interceptor are some crazy dudes and not just due to this remake. It goes much further than that and you can read about it all in a feature in the coming week. They may just be crazy enough to make this reboot work. Even though there was no Dog mode or boss fights to be found in this demo, they will be in the final version along with everything else great about the original. Although I’m not convinced there is still a market for such a specific nostalgic trip, I’d love to be proved wrong.

The game is still slated for a Fall 2012 release via Steam, but a console release hasn’t been ruled-out. The Unreal Engine 3 makes a port feasible and the developer has interest, so keep your fingers crossed.