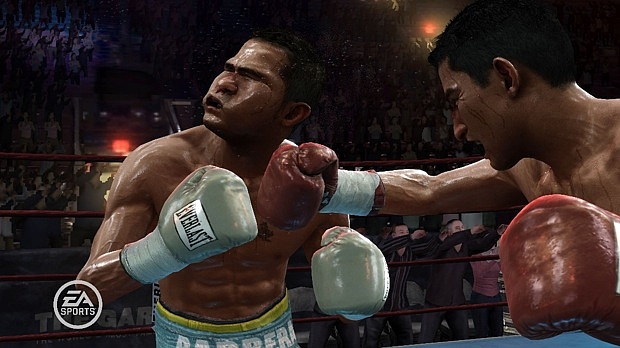 Fight Night Round 4 has a nifty feature called “Photo Game Face.” With the aid of a USB camera or the EA Sports World site, players can import their mugs into the game’s create-a-character mode. From there, the game turns the pictures into a 3D model that can be tweaked, further customized and eventually trashed by Mike Tyson.

Below the fold, Fight Night Round 4 producer Mike Mahar talks at length about Photo Game Face in a video Electronic Arts put out earlier this morning.

“You’ll notice that once you’re in-game, the likeness that you’ve created of yourself is so real, it’ll blow your mind because Fight Night Round 4 has the highest poly count,” Mahar says. “So, that allows us to really push the visual likeness and quality of all of our boxers. Your likeness will be on par with the licensed boxers that we include in the game.”

In addition to dropping details about Photo Game Face, Mahar confirmed the existence of lasers and the game’s ability to extract music from HDDs for unique character ring entrances.

Unique characters can be uploaded and shared through EA Sports World. That means your Andy Griffith creation will get the recognition it deserves. Finally.