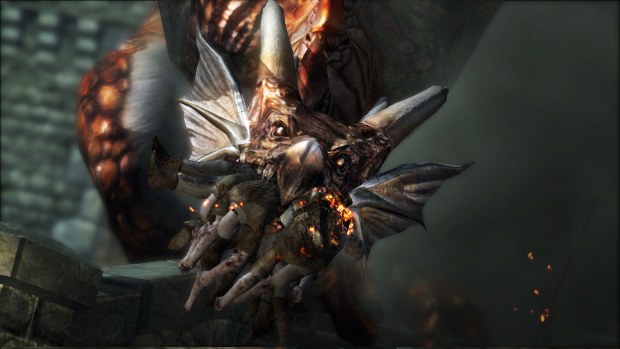 I don’t have a lot of PS3 RPGs, so I’ll take what I can get. Thankfully, Atlus’ freshly announced Demon’s Souls sounds pretty interesting, and the screens they sent look pretty hardcore.

Today they’ve announced that they’ve acquired the rights to publish Demon’s Souls in North America. This is an action role-playing title that supports online cooperative play and PvP action. You’ll be able to leave hints for other online players that follow you if you wish. Or not, if you want to be mean. I like the idea of being able to invade other players’ games, though. A game that encourages you to be a dick sounds pretty fun, doesn’it?

The press release says that this is an open-ended game that you can play at your own pace with your own customized player. A World Tendency system changes monster strength and awards based on players’ in-game actions.

Demon’s Souls sounds like a game that you’d have to see to understand. I suppose it’s good that Atlus says that they will be bringing this game to E3 to show off. We’ll have more details for you in a few short weeks, if that’s the case. For now, check out some screens below — they look pretty badass.

King Allant the XII, the last king of Boletaria, searched tirelessly to expand his might. The Nexus, a great ice shrine nestled in the mountains, bestowed the power of the souls onto him, bringing prosperity to his kingdom. Still unsated, he returned again to the Nexus, where he foolishly awakened the Old One from its eternal slumber. This long forgotten evil, now wrought upon Boletaria, plunged the realm into darkness and fog. A mighty demon horde poured into the kingdom, devouring the souls of men. Champions from other realms learned of Boletaria’s fate and sought to deliver the kingdom from evil; none would return from the cursed land. Called upon by a mysterious maiden in black, you go forth, the last hope for humanity in a place lost to demons and darkness…