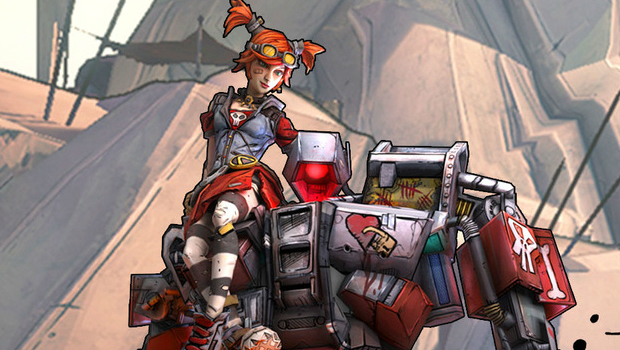 [With this, Dtoider StriderHoang has officially claimed dibs on Gaige in Borderlands 2! That means nobody else can play as her. NOBODY. –Mr Andy Dixon]

You ruffians and such with your upstart choices may think you have won the day with your proclamation of dibs. However, I must sadly inform you rapscallions that your ill-informed choices of these so-called dibs will only bring about regret.

You see, a true mastermind of the land of Pandora waits before he pounces. Gaige the Mechromancer will be released to the general public this October 16, and I am here to detail precisely why you will regret calling dibs so early on the original four characters.

Gaige is coming and I declare that I have dibs on her, you slothful laborers.

Most characters are only concerned with doing damage as simple-minded philistines. Do you believe such a neanderthal like Salvador can formulate tactics beyond running forward and pulling his trigger fingers? Do you think Axton’s automated gun platform solves problems?

Meet Deathtrap, Gaige’s abominable machination. Deathtrap doesn’t just sit in place and mindlessly shoot bullets into ne’er-do-wells. Deathtrap is an expression of Gaige’s genius to solve problems the way mankind has always wanted to solve its problems: have robots do it for you.

Handsome Jack has to deal with a brusque man of many guns, an ex-soldier of fortune, a shadowy assassin from the underbelly of the world, and a woman who was once worshiped as a god. He expects them to run through his mechanical army. But how would he react to seeing a petite, teenage girl waltz into his base of operations wearing a backpack full of heavy artillery with the beck and call of an intimidating automaton?

He would be taken aback of course! Where did she come from? How is she doing this? What has she not revealed yet? If a small girl can shoot a gun as effectively as a bandit and also build a hulking, floating death machine, what can’t she do to undermine my empire?

No skill? No problem! Got skill? Overkill!

One of Gaige’s revealed skills (and also her most maligned) is Close Enough. With it, there’s a chance her missed bullets will ricochet off the surrounding terrain and hit her adversary anyway. Teased as a “girlfriend mode”, this skill was designed to help people of questionable accuracy draw blood even when they have no business shooting guns in the first place. However, the natives of Pandora are fast and unpredictable, so even for veteran FPS gamers, every shot counts.

Imagine a Vault Hunter with an accuracy percentage of 85%. 85% is very good, but not perfect. If you fired a 100-round clip, for instance, 15 bullets would be wasted in the wilds of Pandora! Not so with Close Enough.

So while Close Enough may indeed help unskilled shooters, it shall also bring great shooters to mythical levels of accuracy and wot ho!

You want what you can’t have

Gaige can be considered a symbol of affluence and prestige, as only the upper class who thought ahead to pre-order the game will have access to her. Otherwise, the common plebs will need to pay $10 in order to play as her!

She’s not available to everyone, and, therefore, many will covet her. You always want what you can’t have.

She has a metal arm

Concept art reveals she replaced one of her arms with a mechanical one. In her confirmed appearance, it’s not immediately apparent if she still has this mechanical arm.

Regardless, consider this: if it is still there, she had the steel nerves of a manticore to go through the surgery necessary to attach it to her body. Axton decided to have all his mechanical parts on a turret. Zer0 doesn’t show his cyborg parts, if he has any at all! A sissy-nanny I dare say!

But if she doesn’t have it? Obviously, between concept and her final form, she decided to reattach her original arm because she was bored of having a metal one.

Elementary my dear Vault Hunter. That is what we in the business call badass.