[Dtoid Community Blogger Stevil takes comfort in the fact that some of his favorite videogame characters are growing old with him. Because he’s old. And smelly. Want to see your own words appear on the front page? Go write something! –Mr Andy Dixon]

If Max Payne 2 was a twisted metaphor for the grieving process, then Max Payne 3 is the mid-life crisis, writ large.

Throughout his introspective narration, Max comes to terms with his addictions, and how they lay not only in booze and painkillers, but also violence. For years, he’s fuelled this certain demon with the jaded “protect the family” mantra, desperate to fit the template around anyone, in the hopes that he’ll feel alive for a few minutes. Even when he finally breaks the cycle, he’s quick to comment on how ridiculous his life has become.

“I felt like the avenging angel. I looked like a fat bald dude with a temper,” he says towards the end, in yet another self-deprecating look at his heroism. In real life, most men would deal with their past glories by splashing out on a sports car.

Still, Max Payne 3 is peppered with smart post-modern observations; what’s extreme for Max is just another videogame situation for his audience. It makes him more human, and more importantly, relatable to a fan base growing old in tandem.

Both parties want resolution, but in an age of franchises, it’s hard to hang up those guns. 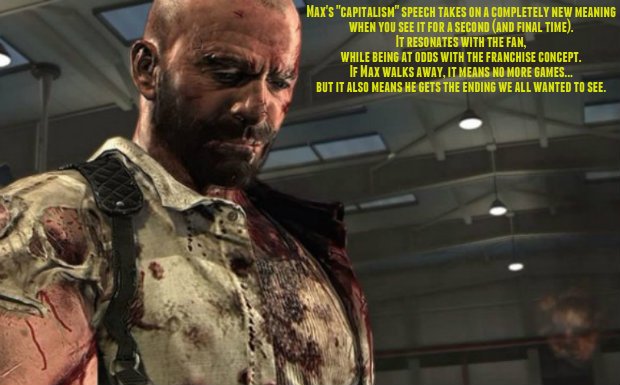 Though it’s never said out loud, when it comes to marketing, publishers are fairly reminiscent of their contemporises in the tobacco industry. If you keep peddling your wares to the young and malleable, then the overruling majority remain apathetic to your nonsensical business strategies.

So, in a by-product of sales, videogame protagonists are kept forever young. They’re cartoon characters; unburdened by the inevitable aging process, and kept Tupperware fresh. You certainly don’t see a videogame’s charming cast fall foul of puberty and teenage pregnancy.

Thankfully, while every website continues to bang the “issue-of-the-month” drum, there’s no need to advocate an abundance of older protagonists. In fact, this generation has done a wonderful job of using oldies as a way of exploring the medium. 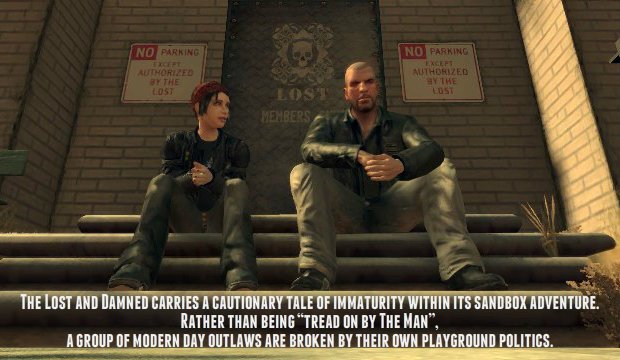 Older protagonists are usually people with something to lose, or given a situation where their views are challenged. The older they are, the more they wonder about their own world, and their goals end up sharing parallel to the player’s intentions. It’s an idea used to the fullest effect in the Kane & Lynch series, where the protagonists and the player share the same indifference to collateral damage as long as they survive. Both characters comment on it in their own ways, each with their own set of excuses, but ideally, they’re in synchronicity with whoever’s behind the fourth wall.

By using wisdom through age, same generation developers have a way of connecting to their respective audience, and simultaneously dissect their own work. Alan Wake is a perfect example of using age and experience as a narrative dynamic. The entire plot is a surrealist take on a novel’s creation, from start to finish, and everything the emotions that come after it. Wake looks back on his novice days as guidance, avoids the mistakes of another artist, and refines his work to defeat an adapting enemy.

Like Wake, the majority of older protagonists need a reason to keep going. Ultimately, because the videogame and audience demands it, they’ll push forward. Even the most broken of characters will find a reason through their perspective of that given world. 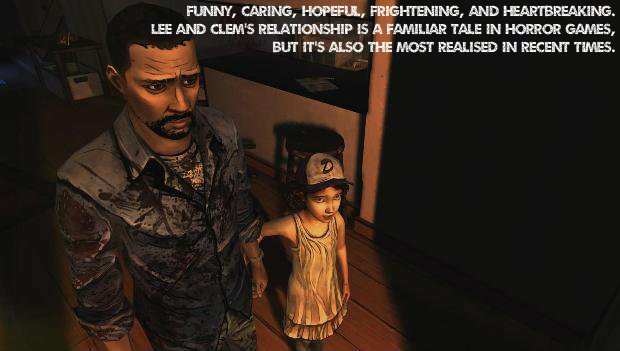 The Walking Dead explores the complex surrogate relationship of Lee Everett and Clementine. Without Lee’s maturity, all sense of authority is diminished, and the complexity of explaining morals in survivalist’s world would lose impact. In his shoes, we’re asked for advice, told to take sides, and lead a little girl to safety. If we played younger characters, like Carley or Ben, we’d be supportive outsiders looking in. Sure enough, we’ll soon see a different take with Joel and Ellie in The Last of Us.

Sometimes, they don’t even have to be damaged, just misplaced. Yakuza‘s Kazuma Kiryu is a man of honour, and after being in prison, his romantic code seems out of date with today’s organised crime. Though, rather than being shunned, he becomes the inspiration for those searching for lost values and hard earned respect. As a running theme in Yakuza, it’s the older characters that turn out to be the smartest survivors in the urban jungle.

This doesn’t mean you can’t be of a certain age to appreciate a character’s intricacies. If that was the case, nobody would be playing any sort of narrative-centric videogame. You can be younger than the protagonist and still understand the reasons, but in terms of narrative dynamic in a world built around gaming mechanics, post-modern observations need life experiences embedded into an older character.

And by keeping characters vigorous, they live for the moment. 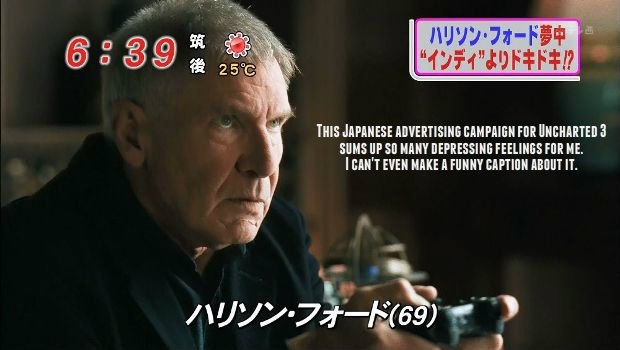 For example, Nathan Drake’s age progresses slowly, but surely. That way, he remains iconic, and his familiar costume design reinforces that idea. The same cannot be said of Indiana Jones, where the illusion of celluloid immortality is broken by the need to address Harrison Ford’s age in the fourth installment.

There has to be a real progressive reason to age a character, and considering how Uncharted moves along, there’s no need to dramatically age Drake. He’s a perfect embodiment of the modern adventurer, appealing to a broad demographic. Sure, there’ll be a time when we’ll explore how he chooses to settle down, but this a character in his prime and at his zeitgeist.

Being in one’s prime is what the industry wants for their franchises, and will go to any effort to keep it that way. It’s not about vanity, it’s about money, and sometimes it can bankrupt a character if you decide they need rebooting. 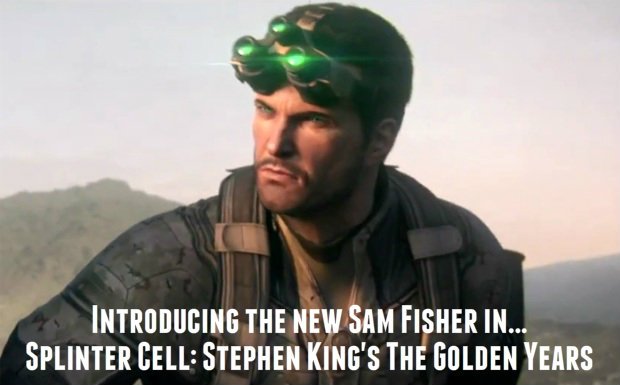 Recently, we’ve seen reboots of two industry standards – Splinter Cell‘s Sam Fisher and Tomb Raider‘s Lara Croft – in what can only be described as a parody of Hollywood face-lifts.

Whereas Fisher’s inexplicable new youth is give credence through a floating timeline, and thus retaining the sliding politics that built up his character, Croft’s creators have wiped the slate clean. Her phenomenon in the 90’s gives the Tomb Raider brand a residual relevance, despite being usurped by a more contemporary franchise, fronted by a certain Nathan Drake.

It ostracises the older generation of fans, while the new audience are completely alienated by an older personality trying to reclaim their crown. It’s a familiar tale: 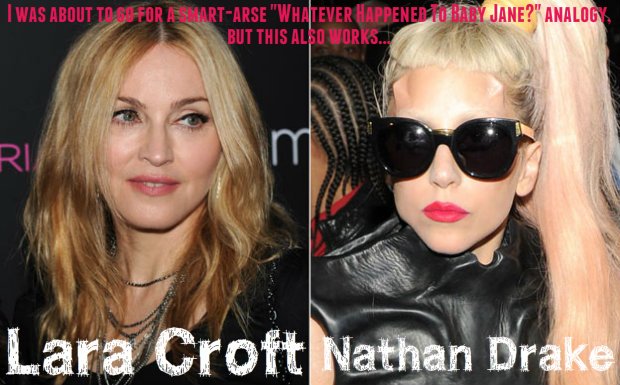 So rather than build upon an older and smarter heroine – the epitome of age before beauty – we see something that even Heidi Montag would find distressing.

It’s not as if older women are only portrayed as hideous old hags. It would be far more intriguing for the character to act her age, reflect on her popularity, whilst incorporating contemporary mechanics. Instead, we get another origin story with a young woman who has similar basic traits and need to be shaken out of her complacency.

Whatever the age, being relatable is an essential trait for any character. It allows us to role-play anyone, from an IT worker having the world’s strangest affair to a kid dealing with growing pains, albeit in the midst of a supernatural murder spree.

All creative endeavours are built from personal experiences, so no matter how you read into the idea of videogame ages, older protagonists are particularly telling of their developers’ maturity. Older characters are taking a more central role in our stories, becoming less about supporting sages, and being sidelined by arrogant Alpha Males. Not that we should ignore their potential in those roles. Some of the more popular characters today are dark mirrors, wisecracking travellers, and legends that color in the worlds. They might need our sympathy or help with redemption, but when the action starts, they’ll give as good as they get. 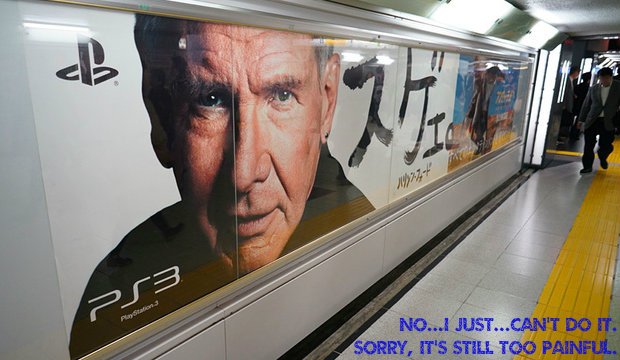 It’s impossible to tell how our generation will be represented down the line, or if our peers will bother to keep representing us. Maybe they’ll try to get down with the kids. More than likely, people who play today will grow out of videogames when the big 4-0 rolls into town.

There’ll be the inevitable cries of, “Not me, man! No way!”, but nobody knows what will happen to you in ten years’ time. Either way, you’re going to reflect on how far you’ve come in the world. It would be nice if videogame protagonists could, too.