Perhaps the most important bullet point from Sony’s 2023 Consumer Electronics Show presentation is the publisher’s unveiling of a new customizable controller — Tentatively named Project Leonardo, the new controller is aiming to redefine accessibility options for users on the PS5 platform.

“At CES, we announced the next step in our journey to make gaming more accessible: Project Leonardo for PlayStation 5,” reiterates Sony on the PlayStation Blog. “Developed with key contributions from accessibility experts, community members, and game developers, Project Leonardo is our codename for a new highly customizable controller kit that works “out of the box” to help many players with disabilities play games more easily, more comfortably, and for longer periods.”

Project Leonardo will attempt to offer a wide variety of builds for individual players, and designed to used on its own, in tandem with another Leonardo unit, or in tandem with the DualSense controller. Project Leonardo features full remappable buttons, as well as a variety of differently sized and shaped analog stick caps. Each unit can save up to three different control maps, allowing for swift switching of button definitions between games and users.

In addition, the sticks themselves can be altered to define their neutral and North positions, and the units can be secured to flat bases — such as tabletops and trays. For future expansion, Project Leonardo features four 3.5mm ports, allowing for connection to off-board buttons, external switches, and any forthcoming Project Leonardo accessories. Clearly, the aim here is for Project Leonardo to be as customizable as possible in order to facilitate comfortable, accurate control for all manner of users. 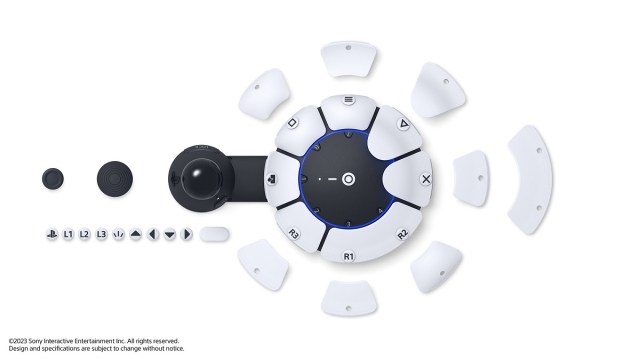 Designed by Sony Interactive’s So Morimoto, with input from groups such as AbleGamers, Stack Up, and SpecialEffect, the project is currently still in its development stages, with more information to come at some point in the future. It looks like a fantastic endeavor, and is one of the strongest-ever efforts made by a major publisher to create a fully customizable, easily adaptable control unit for its users, hopefully opening up a world of gaming to wider audiences everywhere.