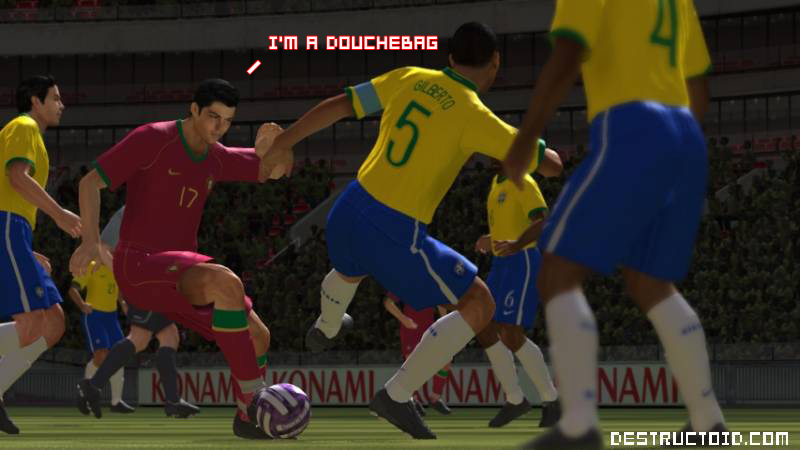 People often lambast EA Sports for churning out recycled games year after year after year, but today, I’m going to take this opportunity to take a few shots at Konami, and not just because I like FIFA better than Pro Evo.

Pro Evolution Soccer 2008 was officially announced today, in a press release touting the joys of “Teamvision”, the new AI:

Key to PES 2008 is a proprietary adaptive AI system entitled Teamvision. Unique to the Konami game, Teamvision is a sophisticated AI programming that learns and adapts according to an individual’s style of play. As such, it will learn new ways to build attacks and to counter specific movements and previous attacking or defensive errors, ensuring games are more in line with the tactical but flowing nature of the real thing.

And rightly so: the beefy AI is one of the strenghts of the Pro Evo series and has been for a long time, and there’s no reason to believe that this latest iteration will be any different. Also unlikely to be different are the graphics, which can be seen in the gallery below. PES will probably still lack the licensing availble to its bankrolled American counterpart as well, as nothing in the press release (which you can find below the jump) makes any mention of it.

Instead of typing everything out, I’ll just tell you to expect Pro Evolution Soccer 2008 in the fall on every reasonable system except the Wii. If you really want to be a stickler, its in the first paragraph of the press release. Hit the break for my two cents, a press release, and some screenies.

And yes, I went out of my way to make fun of Cristiano Ronaldo, because he is, in fact, a serious douchebag.

You know what else won’t be any different? The FIFA vs. Pro Evo debate.

If you liked other Pro Evo games, then this one will be no different, and I don’t forsee anyone’s loyalties shifting any time soon.

The Evolution of the ‘Beautiful Game’

‘Learning’ AI, new Next Gen iterations, and specific enhancements to gameplay revealed in Konami Digital Entertainment GmbH’s new Pro Evolution Soccer
Konami Digital Entertainment GmbH has announced that PES 2008 will be released in Autumn 2007. The latest edition to the multi-million-selling Pro Evolution Soccer series will be released for PLAYSTATION®3, Xbox 360, PC-DVD, PlayStation®2, PSP® (PlayStation®Portable) and Nintendo DS, and is primed to be the definitive football title for any format.

Key to PES 2008 is a proprietary adaptive AI system entitled Teamvision. Unique to the Konami game, Teamvision is a sophisticated AI programming that learns and adapts according to an individual’s style of play. As such, it will learn new ways to build attacks and to counter specific movements and previous attacking or defensive errors, ensuring games are more in line with the tactical but flowing nature of the real thing.

With the Pro Evolution Soccer series renowned for its fluid, realistic gameplay, the new game builds on the implementation of Teamvision with additional key advances. As with previous releases since its inception in 1996, the ball is again treated as a separate entity, with the timing of shots entirely down to the player, while the new AI ensures that defenders work to close down space and block efforts on goal. Similarly, distribution of passes works along the same lines, with players using the space available to them to switch the ball. Close control has also been enhanced with more control when dribbling the ball, and a number of subtle moves added to bypass defenders and move the ball into space.

Working in conjunction with the Teamvision system, every aspect of Pro Evolution Soccer 2008’s on-field play has been reworked and fine-tuned to create the balanced and strategic play of a high stakes match. Set-pieces have been improved, with full control given over the number of players and the position of the defensive wall. A wider range of set piece options are also available to make use of specific talents within the team.

Marking the series’ first appearance on PLAYSTATION®3, and its second Xbox 360 outing, these and the PC-DVD ‘Next Generation’ versions of Pro Evolution Soccer 2008’s are further enhanced by stunning aesthetic elements. Player detail has been taken to incredible levels with full facial animation and the high-definition detail afforded by the hardware used to show full movement and subtle details to the various kits during the course of a match. All ‘Next Gen’ versions will also benefit from an extensive Edit mode, allowing gamers to customise their PES experience.

“We have taken a long hard look at what has made the Pro Evolution Soccer series so popular, and where we want to take it next,” commented Shingo ‘Seabass’ Takatsuka, creator of the series and Producer of PES 2008. “With the new Teamvision AI system, we truly believe that we have elevated the game to a new level. The movement of players off the ball, coupled with the total control given to the player, creates the closest simulation of real football to date. We really hope everyone enjoys our evolution. I promise it will be worth the wait.”

PES 2008 will be released for PLAYSTATION®3, Xbox 360, PlayStation 2, PSP® (PlayStation®Portable), PC-DVD and Nintendo DS in Autumn.