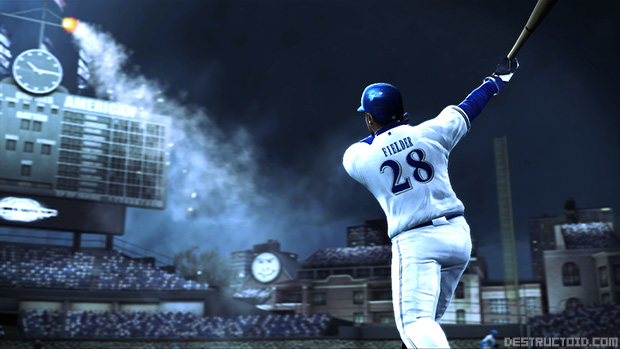 Arcade sports games are all about bombastic spectacle — basketball players soaring twenty feet in the air for a dunk, hits so vicious that helmets are knocked off — and in baseball, that means home runs. Specifically, I’m referring to towering blasts that leave stadiums and smash lights, à la The Natural. So it’s only appropriate that 2K Sports has tapped Prince Fielder, All-Star first baseman for the Milwaukee Brewers (and brawny home run machine), to be the coverboy for their upcoming arcade baseball title, The BIGS 2.

Fielder is known for his power: in 2007, at age 23, he became the youngest player in MLB history to reach the 50-homer mark. And at 5’11” and 268 pounds, he’s also, shall we say, pudgy — a physique that’s represented quite well in the first trailer for The BIGS 2 (check it out after the jump, along with a press release). In the video — and the first screenshot, which you can find in the gallery below — you can see Prince going yard, and there’s also some footage of him playing defense.

New York, NY – April 7, 2009 – 2K Sports, the sports publishing label of Take-Two Interactive Software, Inc. (NASDAQ: TTWO), announced today that MLB® All-Star first baseman, Prince Fielder of the Milwaukee Brewers, will be featured as the cover athlete and spokesman for this season’s highly anticipated arcade-style baseball video game, The BIGS™ 2. After breaking the MLB record for youngest player (23) to hit 50 home runs in a season, formerly held by Hall of Famer Willie Mays, Fielder has quickly become one of the most powerful and spectacular home run hitters in Major League Baseball® today.

“I’ve been playing baseball video games for as long as I can remember. All of my idols have appeared on a video game cover, and now to have that same opportunity is truly an unbelievable feeling,” said Fielder. “I can’t wait to see myself in The BIGS 2. I’ll be the guy crushing mammoth home runs into the stands.”

Drafted as the 7th overall pick by the Milwaukee Brewers in 2002 out of Eau Gallie High School, Fielder broke out in an MVP-caliber season, in which he was chosen by fans as the starting first baseman for the National League in the 2007 All-Star Game. That season, he won the Players Choice Award for Outstanding Player in the National League as voted on by the players, along with the Hank Aaron Award, given to the top offensive performer in each league as voted on by the fans. Fielder, who also currently owns the Milwaukee Brewers’ franchise record for home runs (50) and extra base hits (87) in a single-season, led his team to an exhilarating Wild Card berth in 2008 and its first playoff appearance in 26 years.

“Prince is a rare and tremendous talent that comes around only once in a generation, and we’re absolutely thrilled to be working together with him on The BIGS 2,” said Greg Thomas, senior vice president of sports development for 2K. “After reading through all the different community message boards and forums, we’re excited to deliver a variety of new features that our fans have long been clamoring for, as they’ll surely notice the big leagues just got bigger this season.”

The BIGS 2 is not yet rated by the ESRB and is scheduled to be available on July 7, 2009 for the Xbox 360® video game and entertainment system from Microsoft, the PLAYSTATION®3 and PlayStation®2 computer entertainment systems, PSP® (PlayStation®Portable) system, and Wii™ home video game system from Nintendo. For more information, please visit www.2ksports.com/games/thebigs2.