When I was told that I’d be previewing Wipeout In The Zone for Kinect, I thought for sure that Destructoid was trying to torture me through some sort of new-editor-hazing-process. For one, I’m a writer, not an athlete, and anything that involves sweating off my makeup in public just isn’t something that I find appealing. For another, a slogan like “I survived the Big Balls” warrants one dramatic facepalm and sounds like something that might possibly follow me around for life.

It was only after knocking back a beer and being subjected to a few degrading pats on the back from my snickering team mates that I was finally able to rub my hands together and get down to business. Jacket off, deep breath, game on; Big Balls, here I come! 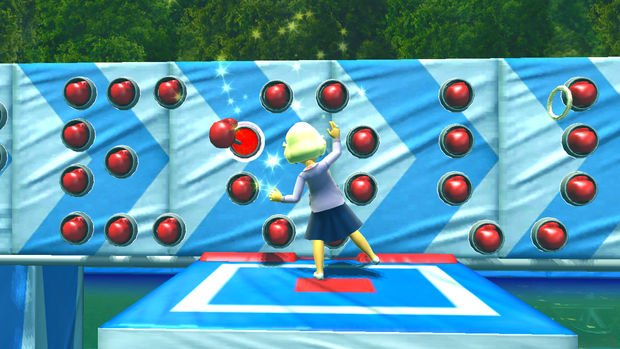 Wipeout In The Zone (Xbox 360)
Developer: Activision
Publisher: Activison
To be released: June 14, 2011

If you’re not familiar with the title, Wipeout In The Zone is based on ABC’s hit show Wipeout which, similar to Ninja Warrior, throws people into an extreme obstacle course and challenges them to complete it in order to win a fairly sizeable stack of cash.

When asked to comment on the similarities between the TV show and the videogame, Associate Producer at Activision, Matt Hohl, stated, “We wanted to follow the formula of the show. There are nine episodes, each with three rounds just like on TV. And we even have the original hosts who came in and recorded over 2,000 lines of dialogue just for the game.” 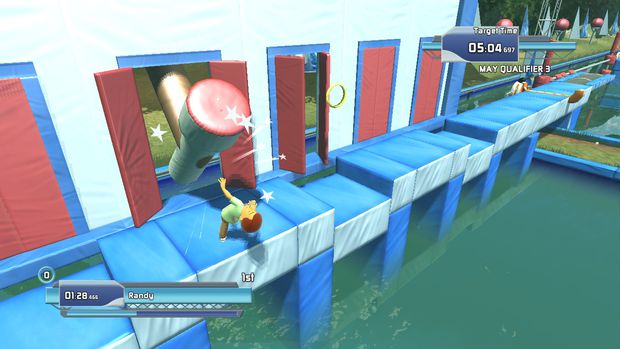 Part of the fun of Wipeout In The Zone is the twisted amusement you get from watching someone make a complete jackass out of himself while he plays. There was definitely more than one occasion where I found myself pointing and laughing when someone slipped up or cursed in frustration. Much to my regret, of course, as this same treatment was eagerly returned during my own play through.

According to Hohl, one difference between the videogame and the actual show is that you can now hurt these videogame characters in ways that you obviously can’t in real life (without actually killing anyone, anyway). Hohl continued, “The obstacles in the show are already crazy. But the developers were able to make them even crazier in the Kinect version.”

Between ducking and sidestepping to dodge incoming boxing gloves from the Sucker Punch wall, attempting to maintain my balance while tightrope walking over to the next obstacle, and jumping up to avoid the swinging obstructions in my path, I can definitely vouch for the “craziness” of the obstacles. 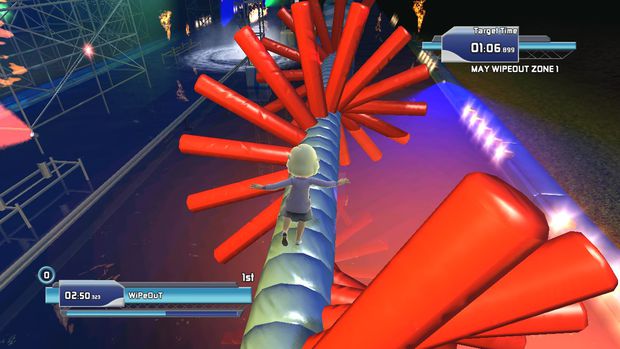 After seeing how out of breath everyone appeared to be following their own play throughs, I assumed that I’d be sweating up a storm as well. Fortunately, this was not the case and I walked away feeling rather refreshed. This could either mean that I am the perfect specimen of human health, or that the intensity of the game is determined by the stamina of the individual player. That being said, I personally do not find this game to be too much of a workout and can definitely see even the laziest person enjoying it.

As for how fun it was to play and how in sync Wipeout In The Zone was with my movements, well, there was definitely a slight lag time between my actions and the game’s response. For example, I found myself having to leap much earlier than anticipated to get my avatar to register the jump, though this is something that you get used to after a couple.

Other than that, Wipeout In The Zone wasn’t too terrible and is pretty much what you’d expect from an avatar-based Kinect game. It’s nothing that really blew my mind or made me want to run out to GameStop for a preorder, but I can see myself snagging it for a drunken kickback with friends alongside Rock Band or Guitar Hero.