I suppose that’s not the best way to start off a preview of a game based on Alan Moore’s seminal graphic novel, but hey, it’s the truth. I’m definitely going to check it out before the movie comes out on March 6th, though — that way, I’ll be able to bitch, just like the rest of you, about how it does the source material a despicable disservice.

On the other hand, the upcoming Watchmen-based videogame from Danish developer Deadline Games, of Chili Con Carnage and Faith and a .45 fame, actually looked like it might not turn out all that badly when I saw it in late January at a press event in New York City. For a downloadable title (PSN/XBLA/PC) that is the first episode of two installments that have been planned thus far, the sure-to-be M-rated brawler could be worth checking out.

Follow me to the jump to find out why. 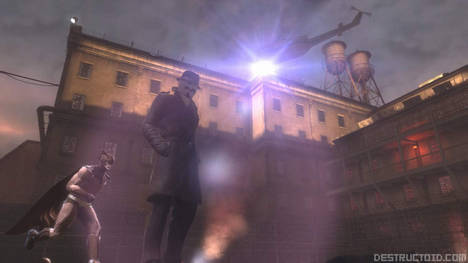 From what I know of Watchmen, it takes place in 1985 in an alternate history where superheroes exist, but have been outlawed. The End Is Nigh (I keep typing “The End Is Night”) is a “subversive” Watergate-era (1972-73) prequel that shows off its two playable characters, Rorschach and Nite Owl, in their heyday. Producer Andy Abramovici told me that the developers had the full backing of the people involved with the film — for example, actors Patrick Wilson and Jackie Earle Haley, who play Nite Owl and Rorschach, respectively, in the movie, also provide voices for the videogame.

The game’s storyline was penned by Len Wein, who worked with Moore as an editor on the original graphic novel, and it starts off with Nite Owl and Rorschach infiltrating a New York prison where a riot has broken out — or perhaps it was caused by someone behind the scenes. The End Is Nigh is a dual-character beat-’em-up that offers split-screen (local, not online) co-op play. If you’re playing alone, of course, the AI will take over for the other character, and at any point during the game, you can switch between the two. 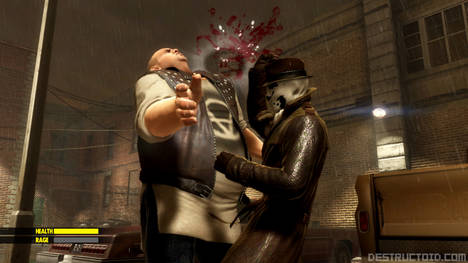 Abramovici stressed the stylistic differences between the two characters. Nite Owl has a “heart of gold”; he’s a “proper” superhero who has an extensive knowledge of martial arts. Meanwhile, Rorschach is on the opposite end of the spectrum — raised by the streets, he’s a much more “feral” fighter who lacks finesse. Accordingly, the two have separate abilities. There’s no HUD in the game except for two bars: health, and a second “special” one that depends on the character you’re controlling. For Nite Owl, it’s a “charge” bar, while Rorschach’s got a “rage” meter.

The End Is Nigh is a relatively standard brawler. The face buttons are used for a variety of combos, more of which are unlocked as you progress through the game. You can use weapons to your advantage — for example, some of the prison inmates will come at you with lead pipes and baseball bats, and after you knock them out, you can pick up the items they dropped and start bashing their heads in. Nite Owl has the added wrinkle of a grappling gun, while Rorschach can pick locks.

In and of itself, none of this may sound particularly noteworthy. But what could elevate the Watchmen game above a mere run-of-the-mill brawler is its high production value. Abramovici explained that Warner Bros. Interactive, the publisher, decided against a full-on sixty-dollar disc title since the development process would have been hamstrung by the requirement to put out the game around the film’s release. By focusing their resources on a few smaller slices of game as part of an episodic series, they were able to ramp up the quality of the individual experiences. 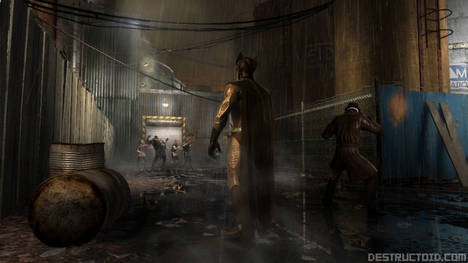 While the game’s visuals may not be mind-blowing, they’re definitely better than many of the downloadable games out there. And the comic-inspired cutscenes do a great job of hearkening back to the source material and reminding you of the world in which you’re running around. The game runs on a proprietary engine with rag-doll physics, which somehow never get old, and apparently, it can handle up to 20 on-screen enemies at once. The combat is brutal, bloody, and fast-paced; utilizing basic button presses, it’s straightforward enough for casual players to grasp, but its simplicity belies its depth.

I didn’t see enough of The End Is Nigh to say if it lives up to the original graphic novel — and even if I did, I wouldn’t have been able to evaluate that, since I haven’t read the work. But don’t be so quick to dismiss the game just because Alan Moore wants nothing to do with it or the movie. Clocking in at nearly 2 GB, the game is one of the largest ever to hit Xbox Live Arcade — so at the very least, you know that nothing’s being sacrificed in the name of file size. Look for Watchmen: The End Is Nigh to hit the PC, PlayStation Network, and Xbox Live Arcade in March. Check out a bunch of screenshots here and in the gallery below.