The only bad thing about a new Transformers game is the shadow the reviews cast upon it from the previous entry in the series. That being said, sitting down with the developers behind Transformers: Revenge of the Fallen  and hearing them say they have put a great deal of time into taking stock of what gamers did and did not like about the first game (and making sure that feedback was implemented) was refreshing indeed.

When a fellow journo asked me outside the event what it was I wanted out of Transformers: Revenge of the Fallen, my response was fairly simple: “I want to play Optimus Prime and bash the hell out of things!” What can I say, I’m a simple girl. If you follow me past the jump, I’ll tell you how well the game allowed me to do just that, not to mention how multiplayer is a little bit like Earth Defense Force 2017 with giant robots thrown into the mix.

In April, Jim Sterling got a first look at Revenge of the Fallen in a preview event in San Francisco, and in my recent visit to Las Vegas I got a chance to bring you more by getting my hands all over the gameplay, both in single player and multiplayer mode. I have a feeling the latter is going to end up being the biggest draw for the game, not because single player isn’t fun, but multiplayer allows you to play with up to seven other people online, and results can be a pretty chaotic and yet fulfilling blast of fun.

Before I get to that though, I do want to outline a bit more of the single player experience for you. You can choose to play as an Autobot or a Decepticon in this mode. I asked about how closely the game will follow the events of the film, and while we couldn’t get into specifics since the movie is not out yet, it seems it is going to loosely follow the story with some slight room for deviation. 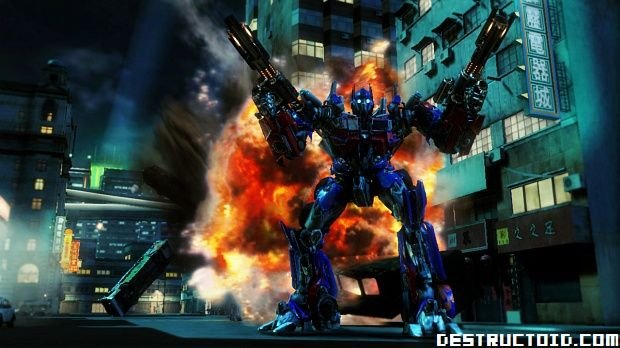 You choose from ten characters to play from in this mode, including favorites such as Optimus Prime, Bumblebee, Starscream and more (see the full list here). After a short tutorial that allows you to get comfortable controlling your bot of choice, you’ll be off working your way through a series of missions that may have you assisting the Decepticons in their attempt to return to power after their defeat from first film, or strengthening the ranks of the Autobots. It all depends on what side you choose.

We basically knew what Transformers would be available on each side already, but we didn’t know what all their powers would be. I got a much closer look at these, and I can tell you there’s something that ought to please each different type of gamer. For the Autobot side, Optimus Prime is your powerhouse character (duh), while Ratchet is a more balanced choice and Ironhide is a master of close range attacks. Also introduced is Protectobot, a new character that is unique to the game (he will only be open in multiplayer mode though).

On the Decepticon side, you have Long Haul as your tough but slow healer, Sideways as your sniper and Seeker as the “ultimate assassin”. Megatron is your powerhouse and can fire off a single shot for massive damage using his special attack, which is a fusion arm cannon. Let me tell you how awesome that sounded to me — I am all for the hard hitters that can destroy shit like nobody’s business. 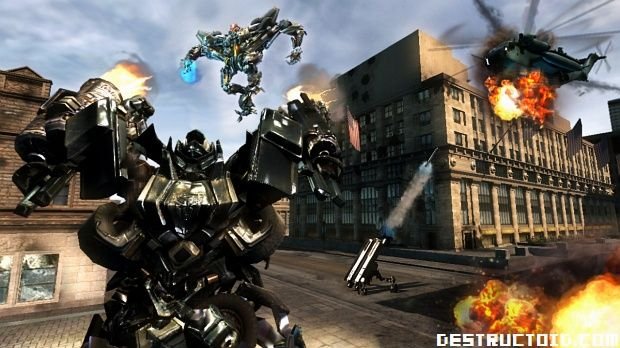 This is a huge roster to choose from between the two teams, but Luxoflux reminded us that on top of all this, there will be DLC coming after the game’s launch with more characters, so if you feel one of your little-known favorite characters got left out, there’s still hope he might pop up later down the line.

One thing I really loved as soon as I discovered it in single player mode is how quickly I could shift between robot and vehicle form. I found the controls for this clunky in the first Transformers game, but in Revenge of the Fallen a simple depression of the right trigger had me speeding away in moments, which can come in handy when you need to escape certain enemies. However, you’ll need to keep the button depressed in order to stay in that form. While this aspect of the control scheme takes a little getting used to, once you adjust you’ll be seamlessly transitioning between the two with no problems.

The timed missions were not limited to ground combat — after all, what fun is it if you can’t fly around sniping things from the air? While the gameplay looks as if it could be clunky at a glance, I’m pleased to be able to tell you that moving your bot around is smoother than it looks. After all, how could you play a game of multiplayer with seven other people and feel like you’re clanking around like Gort from The Day The Earth Stood Still?

And about multiplayer: it’s a lot of fun, if not a little bit overwhelming the first few times you play. You have five modes to choose from, Deathmatch, Team Deathmatch, One Shall Stand, Control Points and Battle for the Shards. Deathmatch is your traditional every man for himself style, but rather than winning for getting the most kills, you win for allotting the most points. What this means is that you should not just run around blasting randomly, but aim for creative kills to boost your score. After you adjust to the constant action, you should be able to start figuring out the best ways to do this (although you have to watch out for those guys who just want to blow you off the board). 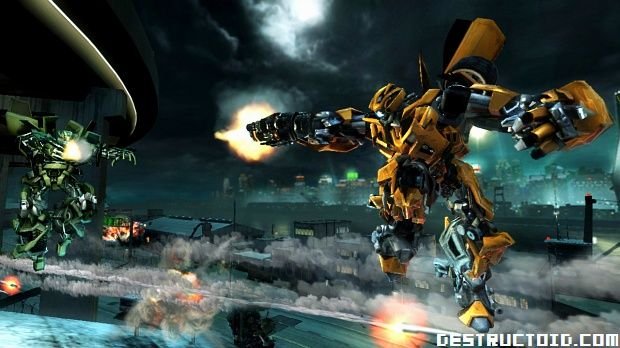 Team Deathmatch is going to pit Autobots versus Decepticons, and to me this mode was a bit more fun than straightforward Deathmatch was (although I’d say that’s my personal preference talking more than anything else). This mode relies on the kill tally to declare a winning team at the end, and it allows you to act more on instinct than to get distracted from the action by figuring out how you should kill another bot for the best score.

One Shall Stand is by far the most interesting multiplayer mode. It puts one player into the role of Optimus Prime and the other as Megatron, and the goal is to take out the opposing team’s leader. Other bots on the team will respawn as long as the team leader stays alive, but if he goes down it’s all over, so you have to keep an eye on him! If he does get taken down, the team had 60 seconds to kill the other team’s leader before they lose. If this is a success, the player who takes out the leader will become the team’s leader for the following round.

Control Points will challenge you to take over five points on the map in order (as a team), and Battle For The Shards is basically a capture the flag mode where you team races around the map collecting shards of the Allspark. With all of these options, as you can imagine, multiplayer alone can keep you busy for quite some time.

The time, effort and attention to fan feedback really shows in Revenge of the Fallen, and I think even gamers who felt burned by the first Transformers game will find there’s a lot to like in this new addition to the series. Plus, playing a giant robot is kind of a total blast. Keep your eye on this one when it hits shelves on June 23rd.