At a recent press event in New York, I saw a demo of The Witcher 2: Assassins of Kings, the follow-up to the critically acclaimed 2007 medieval fantasy RPG from Polish studio CD Projekt. Knowing that the original game had its idiosyncrasies, which is typical of Eastern European-developed videogames, I asked the PR rep, Tom Ohle, if the development team made any concessions to the Western market in order to try and give the sequel a wider appeal.

“CD Projekt’s really a developer that isn’t following industry traditions,” Ohle replied. He went on to say that while the studio has learned from the successes and deficiencies of The Witcher and has certainly made countless improvements to the game, one thing it hasn’t done is dumb down the game. The Witcher 2 remains an old-school PC RPG, through and through. 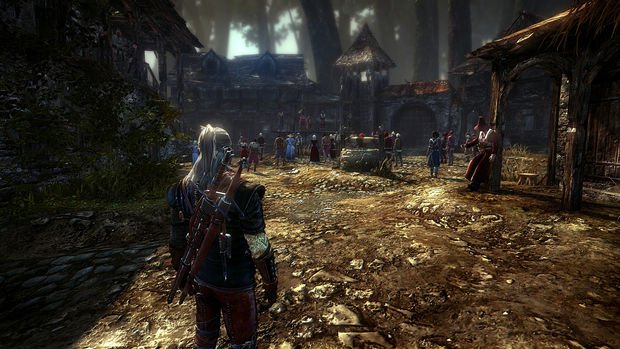 The Witcher ran on BioWare’s Aurora engine, but CD Projekt built its own engine for this game; in the studio’s humble opinion, according to Ohle, it’s “the best built-for-an-RPG engine that’s out there.” It allows for a much less linear experience than the first game — your choices play an even more vital role here, since the storyline can branch in numerous directions, concluding in one of 16 different ways. To drive that point home, the segment of the game that I saw took place around the Dwarven town of Vergan, which is an area that many players might not even see because the plot diverges before you get to it.

That’s one of the many ways in which CD Projekt sets itself apart, Ohle explained. Many big-name publishers wouldn’t likely want to budget for content that most players won’t come across, but CD Projekt feels that it adds to the game’s replayability and makes the game world seem more real. “If you’re […] walking around and you see a little crack in [a] wall, if you follow it, you might find something cool,” he said. 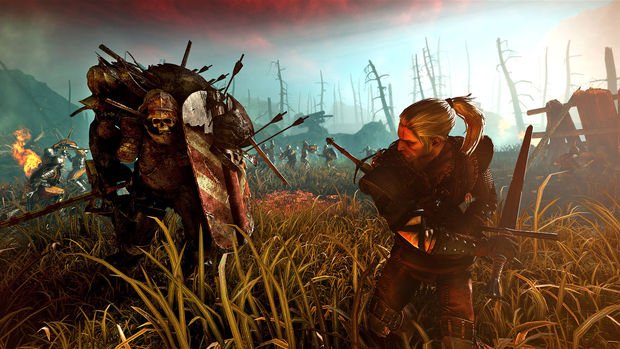 Ohle told me that the team put a great deal of effort into crafting a believable fantasy world; in order to more fully realize Vergan and make it seem like a place in which Dwarves would really live, the developers drew inspiration from sources such as The Lord of the Rings. Vergan is a decent-sized burg, and I noticed a lot of stone and wood was used in its construction. The local bar is a loud, lively meeting place at any time of day. Dwarven children played in the street while other NPCs uttered a couple of lines of dialogue as protagonist Geralt walked past.

Another major change is the combat system. You don’t have to keep switching between combat styles anymore — everything occurs in real time, and Ohle compared the new setup to Batman: Arkham Asylum. You have quick attacks (left click) and strong attacks (right click); holding Ctrl slows down time somewhat, allowing you to swap weapons or choose and cast spells (Q). Blocking at the right moment will parry an incoming attack, which gives you an opportunity to counter, while the space bar can be used for dodging.

To fans of the first game, this might sound like a cop-out, but from what I saw, it certainly doesn’t mean that enemies are any easier to take down. In fact, Ohle almost died in a fight with a single large beast because he wasn’t quite powerful enough for the area. Unlike most modern Western games, enemies in The Witcher 2 don’t scale to the player’s level — as Ohle put it, “If you wander into the wrong place, you’re probably going to get your ass kicked.” 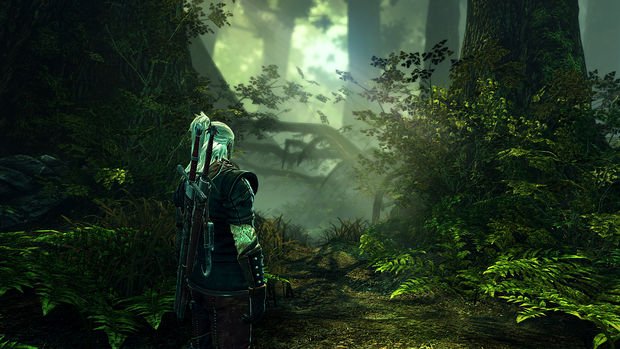 Combat is tied to the game’s four skill trees: training, swordsmanship, magic, and alchemy. You can now change your appearance depending on the items you have crafted and equipped; there’s nothing too outlandish, since CD Projekt wanted to remain mostly faithful to the canon of Andrzej Sapkowski’s Witcher books, but you’ll be able to customize Geralt’s looks within the bounds of the fiction. The studio has also revamped the inventory management, a major gripe with the original game.

I saw a section of an option sub-quest — the demo was half an hour long, so it’s clear that this is a massive game — in which Geralt was tasked with investigating a series of dead young men. On his way to the catacombs where the most recent victim lay, Ohle ran into some trouble and commenced a lakeside battle. I should note that The Witcher 2 looks beautiful, even in the early beta version that I saw: Geralt and his opponents splashed around in ankle-deep water while his spells dealt damage with colorful clouds that engulfed the enemies.

Once Ohle reached the victim’s corpse, he had Geralt play forensic investigator, examining the body for clues. “Fingernail marks all over his back — huh, at least he had some fun before he died,” Geralt noted, concluding that a local succubus likely had her way with the man, then consumed the energy within him and left him to die. After finding a book of love poems on the corpse and recognizing it as belonging to Geralt’s friend, Dandelion, a bard, Ohle headed back to Vergan to find him. The game’s quest journal is actually written as if Dandelion were narrating your story; by the end of the game, it will be a compendium of your exploits in book form. 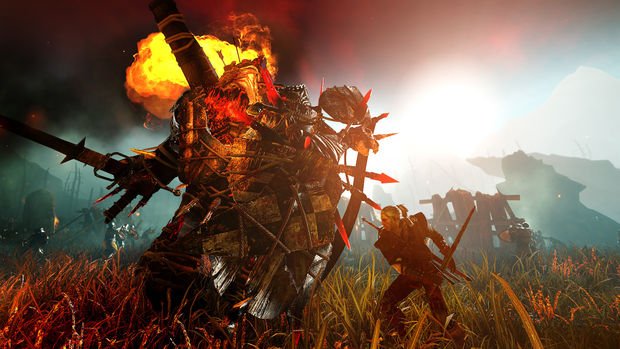 Once Geralt began talking to Dandelion in Vergan’s inn, the game’s dialogue really began to stand out to me. The Witcher 2 can be a damn funny game, and even when it’s not, at least the conversations aren’t cheesy; this time around, CD Projekt brought in a native English speaker to help maintain the story’s quality. Geralt’s plan was to use Dandelion as bait to lure the succubus into revealing her true form. But first, Dandelion wanted to sing his anthem for Vergan to Geralt; when he asked Geralt if he liked it, the monster hunter retorted, “Well… it rhymes.”

The Witcher 2 has a full day/night cycle; the next portion of the quest had to be accomplished after midnight, so Geralt meditated until then. (Unlike in the first game, you can meditate anywhere.) He met up with Dandelion near the succubus’ hideout, and when Dandelion seemed flippant about seducing her, Geralt pointed out that “her beauty’s killed several men,” as far as he could tell. “Now you tell me!” exclaimed a frightened Dandelion.

Here, Ohle actually took control of Dandelion, whose task was to compose a ballad to bring out the succubus. Armed with his trusty lute and poetry book (which you can examine in the game’s journal), Ohle succeeded in arousing the succubus’ attention. At this point, Ohle had the option of going back to Geralt so he could take care of the succubus, but he decided to enter her underground lair himself. “Fucking idiot actually went in!” gasped an exasperated Geralt. 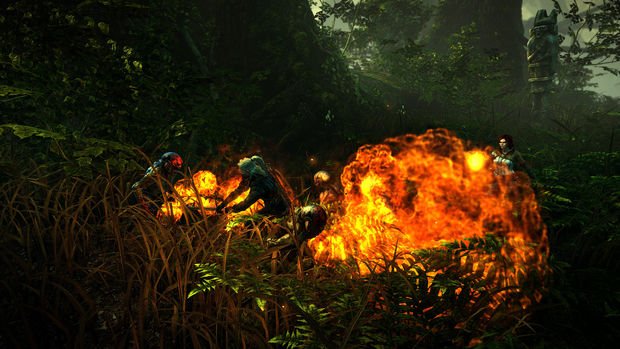 So Geralt followed his friend down into the succubus’ den. A well-endowed naked woman floated before him, with Dandelion strapped to her bed. (The sequel is trying to tell its story in a less silly manner, so the “sex cards” that were in The Witcher are gone, but you can rest assured that there’s plenty of unabashedly mature content in this game.) Ohle told me that he could just attack the demon at this point, but he decided to question her instead. The succubus admitted to having her fun with the formerly-living corpse in the catacombs, but insisted that he was still alive when she finished with him. In a show of good faith, she promised to release Dandelion when he woke up.

The build I saw wasn’t optimized, so the game chugged in spots. I also noticed some hitches in walking around the world, although Ohle explained that the game world is fully seamless, so there won’t be any loading pauses in the retail version. He also noted that players who have completed The Witcher will be able to import their save game into Assassins of Kings, where some of your choices from the first game will influence the outcome of your story. The Witcher 2 isn’t necessarily my kind of game, but I could see that it’s shaping up to be a really impressive PC RPG. Like the alluring succubus in the demo, it can be a cruel mistress, but the ride sure seems like it’s going to be enjoyable.