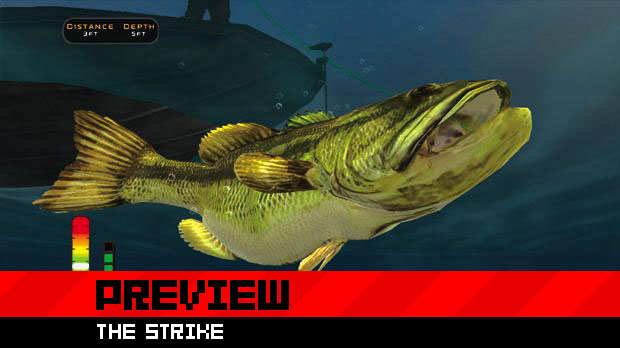 Honestly, the “HOT BASS FISHING ACTION” in the title of this preview has nothing to do with the way that the makers of The Strike are marketing their title. It would also do a disservice to game that is finally bringing motion controls to the Xbox 360.

But if it was up to me, I would just write “HOT BASS FISHING ACTION” over and over again for this preview. Unfortunately, that really wouldn’t encompass everything about The Strike that myself, Hamza, and our old friend King Friday were shown.

Hit the jump to hear more about The Strike other than HOT BASS FISHING ACTION!

Having actually worked on a Bass fishing game before, I knew how absolutely horrible they could be. Let me rephrase that: Knowing how horrible the game that I worked on was, I knew that seeing The Strike could go in any direction. I had heard that the title was being developed for the both the Wii and Xbox 360, and that they were to both include motion controls. Not only that, but the game is licensed by Bass Pro Shops, so I was pretty sure that my previous fishing nightmares would not return to haunt me.

I can firmly state after playing the demo for both the Wii and the Xbox 360 version, that there will be no nightmares. In fact, we had a blast playing The Strike on both systems. Since the game has the official license from the the Bass Pro Shops, it has every bell and whistle that you could possibly ask for in a fishing game. So much so, that after seeing that it even has mini-games, I kind of felt it was like the Madden Football of fishing games in a weird way. The title even uses actual real-life lakes as the setting of the game, and in each one the developer has even used the actual topography of the lake, so people who are into competitive fishing will notice the recreation and hopefully appreciate it.

Now I’ll be honest, I’m not exactly the fishing outdoorsy type. Although, as a kid I was dragged around and subjected to the many nuances of the sport of fishing. While this did nothing for me a child, I guess I can say that it at least helped me while playing The Strike with its motion controllers. The Wii version already uses the Wii Remote technology and a pretty spiffy case was made to house the Wiimote while taking advantage of the Wii’s inherent controls.

The Xbox 360 version, though, had its own controller that was built from the ground up, and it was actually the more technical of the two. The Xbox 360 controller had the same capabilities of the Wii’s motion controls, but it also had its very own force feed back mechanics that replicated the tension of reeling in a large fish and would spin the reel back and forth like it would in the real world. Made by the developer’s peripheral division (Psyclone) the 3rd party controller for The Strike may be the first controller available for the Xbox 360 that uses motion technology.

Whose motion technology is it, though? When we asked about the reel controller and if it meant that there would actually be motion controllers for the Xbox 360, the answer given to us was: That while the controller was made in-house, part of the software (or a chip… I forget) that was used was licensed from Microsoft. So, if Microsoft has that laying around to be licensed… sounds like a good bet that there will be some announcements from Microsoft soon.

Anyway, even though the Xbox 360 version had the spiffier of the two controllers, they both responded exactly the same way when it came to motion detection. So although the player will have an only slightly less unique experience with the Wii controls, it won’t actually affect how the game is played when trying to win your way trough the fishing competitions.

The gang and I spent about a total of an hour playing both, and found that we were having just as much HOT BASS FISHING ACTION on either system. So if you’re the type of person that is into fishing games, The Strike may be the one to erase all the nightmares (OK, just my nightmares) of the fishing games that have come before.