Twisted Pixel is easily one of my favorite studios these days. With titles like ‘Splosion Man and Comic Jumper, what they’re currently doing with videogames reminds me a lot of what Nickelodeon and MTV were doing with cartoons in the early nineties: making them audaciously weird.

When I first heard that The Gunstringer was a shoot-’em-up starring a bandito marionette that you controlled with the Kinect, I just went, “Oh, okay.”

Because really, how else do you react to that kind of concept? 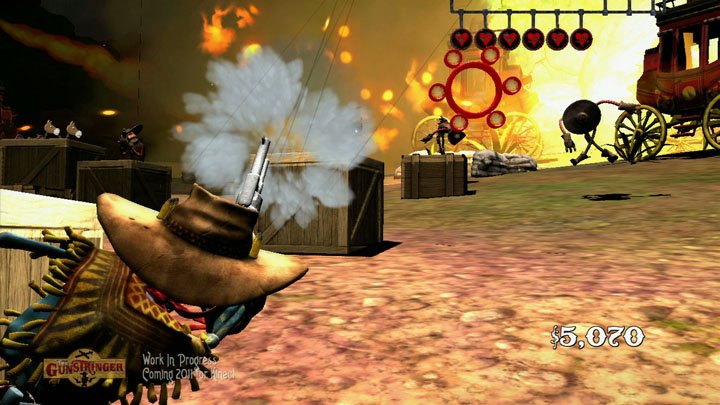 The game opens with a live-action sequence of people entering a theater with “The Gunstringer” on the marquee in big letters. We then see footage of stagehands carrying a puppet up to the main stage, where he’s put down next to a fake tombstone and covered in dirt. Then, the curtain goes up, and this puppet — now computer-generated — is dragging himself up from the grave.

All this sounds very ghoulish and creepy, but I assure you, it’s done with quirky charm. This whole introductory scene is narrated, but since I was playing at a press event, there were about fifteen other loud noise simulators being played within the immediate vicinity. The Gunstringer is a classic revenge tale: our hero was a member of a Wild West posse, but was betrayed. Now, he’s back from the dead to seek vengeance on the other members.

And also, he’s a puppet.

The lights come up and The Gunstringer drags himself into a sunny corral full of cacti and hay bales covered with beer cans, and we’re put through a painless little tutorial session on the game’s controls. Now, considering there is no controller involved, “controls” seems like the wrong word. Semantics aside, the game teaches us how to shoot things. 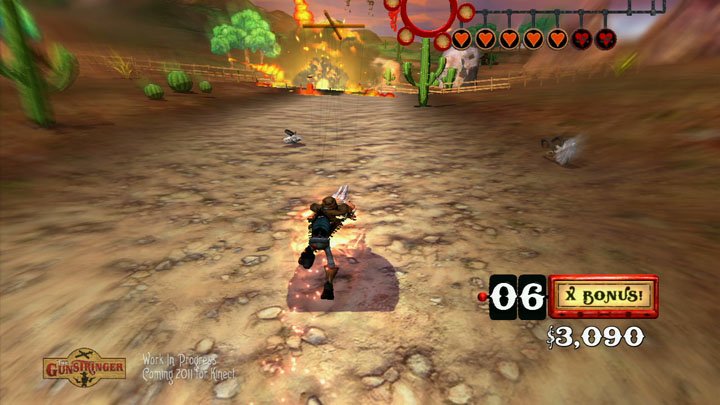 Hey you. Yes, you. Right there, on the computer reading this. Put your right hand out in front of you like you’re holding a pistol. Now, move it around. There, that’s how you aim in The Gunstringer. Now, hold your left hand up like you’re holding a yo-yo. (Or a marionette, if you’re familiar with the feeling.) There. Those are the controls.

By aiming with your right hand, you move around a large crosshair shaped like a the cylinder of a revolver, or perhaps a ring of caps for a cap gun. When this passes over enemies, they become highlighted in red, meaning they’re targeted. By flicking your forearm up (as though a pistol’s recoil had moved it), The Gunstringer will quickly fire off rounds at these enemies. It’s like like dead-eye mode in Red Dead Redemption. Except you’re playing as a marionette. And you don’t have a controller in your hand. 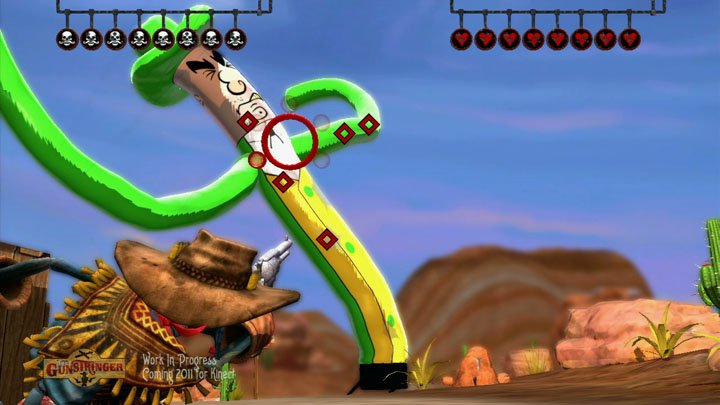 Movement controls are equally simple. By lifting your left hand up, The Gunstringer will leap into the air. Moving your left hand from side to side will make him run to the right or left. At certain points in the game, you’ll take cover behind objects while enemies shoot at you, or hurl sticks of dynamite. While taking cover, you’re able to target enemies, but must blow your cover to fire. This entails moving your left hand left or right, and flicking your right hand up quickly.

I spoke with Twisted Pixel’s Jay Stuckwisch, who told me about other weapons, activated by different gestures, that you’ll see later in the game. One example he gave was if you make a punching motion, The Gunstringer will do a whirlwind roundhouse-punch-type special move. At another point, a man’s arm — a live-action arm, I mean — will enter the frame and squash enemies or put down explosives in helpful places for you. Jay mentioned that it becomes possible to control this mysterious Monty Python-esque hand. 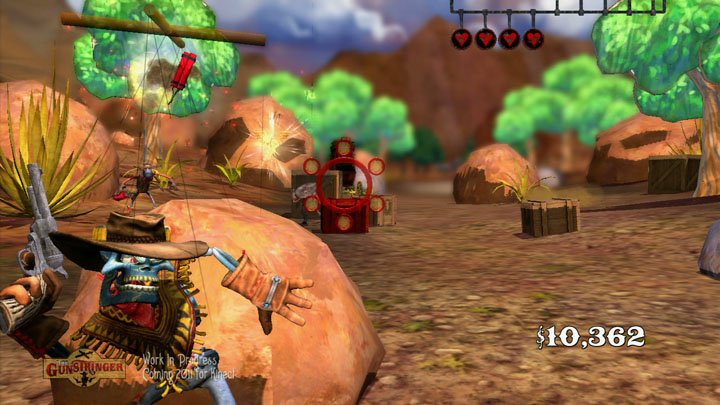 After playing through the prologue tutorial — which involved jumping over fences while shooting vultures and mountain goats — I was treated to a nice training boss. “Wavy Tube Man” is a former member of The Gunstringer’s posse, his title being “posse secretary/events coordinator.” He is literally a wavy tube man, the kind seen outside car dealerships and furniture stores. To fight him, The Gunstringer hides behind crates and hay bales, ducking out to shoot him as much as possible without getting slapped by hiss wacky waving inflatable arm-flailing armtubes. 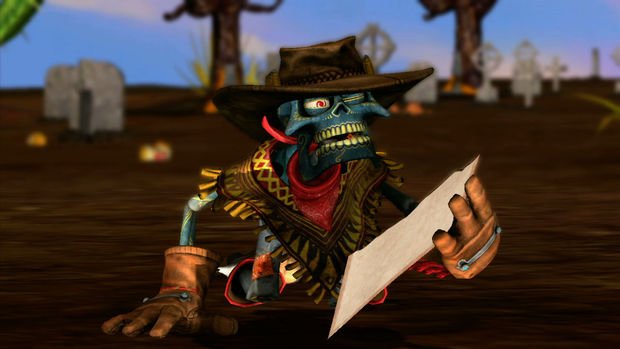 After defeating Wavy Tube Man, The Gunstringer produces a photograph of the posse, and crosses Tube Man out. Based on this picture, the posse’s other members will probably pose more of a challenge. A couple of examples would be the man with a mustache who looks like a robot, and the ancient sagely Pai Mei lookalike.

Filed under... #Destructoid on assignment#Kinect