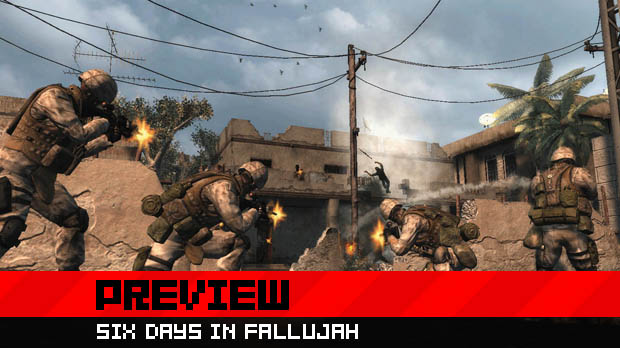 One of the last games Konami showed during the opening presentation at their Gamer’s Night was Six Days in Fallujah. The game has gained a lot of attention already due to it being set during the early days of the invasion of Iraq, a battle that is still going on to this day.

The presentation started with a Marine coming up on stage, describing one of his experiences from the the attack on Fallujah. He and his team had just arrived on the roof of a building that they were using to scan for enemies in the area. Shortly after arriving on the roof, the Marine took a much-needed smoke break. He went back to scanning the area when the next thing he knew, he was waking up in a bush with his head ringing. A firefight was under way, and at some point, the Marine looked back to where he was before and saw that an RPG had just blown up exactly where he was taking his smoke break moments before.

To most people, this would have been a once-in-a-lifetime experience. To the Marines, as the Lance Corporal described, it was just another day in Iraq.

Next, we were shown a video of various Marines talking about their experiences in Iraq as a montage of real war footage was shown. At the end of the footage, the Marines in the video stated that they wanted this game to be made. They want people to see what they went through and hear their stories from the conflict.

And that’s what we’re getting with Six Days in Fallujah. The team from Atomic Games talked to Marines who were at Fallujah to help create an accurate game. The team got the reports, photos and videos from the Marines to ensure that gamers see what happened. Atomic Games worked closely with the Marines in order to nail down the AI for the Marines in the game. They’ll be moving and using tactics that Marines use in real life to help deliver a legitimate experience. The team also talked to insurgents and Iraqi citizens so they could have all sides covered when telling the tale in this game.

Six Days looked like a Ghost Recon-type game where you’re moving around in third-person with a squad of soldiers backing you up. It wasn’t made clear if you’ll have any sort of squad commands, though. The game is still a year away, so visually it was nothing particularly special. The game was also very brown, which makes sense with the Iraq setting. Still, the environment looked very stale due to all the “brownness.” There were a few firefights, and it looked like your standard third-person shooter affair. The game has the regenerative health system in place, rather than the health bar system some lady was saying it would have.

One of the big things Six Days in Fallujah has going for it is the promise of fully destructible environments. They created a new game engine called the “Atomic Engine” from scratch in order to create the fully destructible maps. We were shown a couple of examples of how the player can plant charges on walls in order to flush out enemy insurgents hiding inside houses. It remains to be seen just on what level the destructibility will be. Is it going to be in the style of Red Faction, where EVERYTHING is destructible, or will it be like Battlefield: Bad Company, where everything but the frame of the building can be blown up?

It’s hard to say if Six Days in Fallujah will live up to all of its promises this early on. Ben PerLee, who was at the event with me, noted that a number of people at the event felt uncomfortable with the game. If you’ve never had any issues with any other war game, movie or book before, then you have no right to say that this game is wrong in any way. Actual Marines who were in Iraq are behind this game and they just want people to see what it was like.

On a related note, go watch Generation Kill. It does a great job of showing what Marines went through during the 2003 invasion of Iraq.