Grasshopper Manufacture’s Suda51 is renowned for quirky, out-there games that often have something to say, even if it’s through juvenile humor. As the creator of Capcom’s seminal Resident Evil franchise, Shinji Mikami knows a thing or two about action-horror games. And as evinced by his work on the Silent Hill series, composer Akira Yamaoka is a master of creating a chilling atmosphere.

Those three creative minds have joined to bring you Shadows of the Damned, a third-person action game that offers familiar demon-killing gameplay, yet is a uniquely Suda51-style experience. In mid-February, I was treated to a twenty-minute demo of an early section of the game, and what I saw was a game with Japanese design and Western trappings. 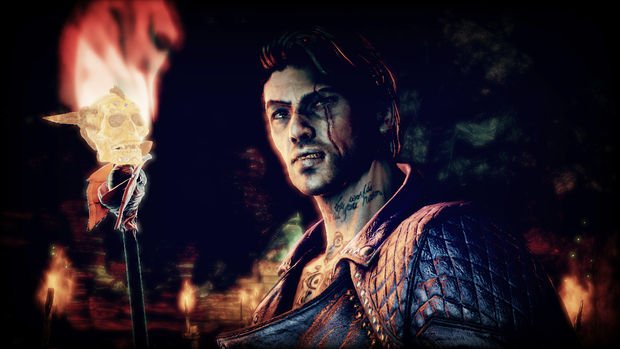 Garcia Hotspur is “a demon hunter who has killed one too many demons,” explained the EA rep who demoed the game to me. By doing that, Hotspur has incurred the wrath of the Lord of the Underworld, who has a decidedly un-hellish name, Fleming. He decides to teach Hotspur a lesson by absconding with the demon hunter’s true love, Paula, down into hell. Lucky for Hotspur, he has a buddy named Johnson who is a former demon who escaped from hell. Johnson also happens to be a flaming skull on a stick, which is why he’s so useful to Hotspur: Garcia needs to use the power of light to defeat the forces of darkness. Johnson serves as a “torchgun,” and as Hotspur’s obligatory wise-cracking British sidekick. This is Suda’s kind of love story, explained the rep — this is his version of “rescuing the princess.”

As a former demon, Johnson is Hotspur’s way into hell — he transforms into a motorcycle and drives straight in. In this game, the outskirts of hell comprise an Old-World town, replete with cobblestone streets. Fleming has thrown some of his minions to impede Hotspur’s progress — just your typical blood-oozing demon spawn. The basic shooting action, with its over-the-shoulder camera, is very reminiscent of Resident Evil, but it’s not as plodding as that series (although it’s not exactly Devil May Cry, either). 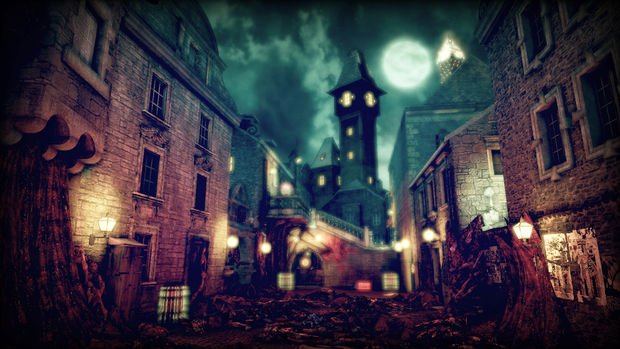 A key mechanic that ratchets up the tension is “darkness.” A dark blue haze envelops Hotspur, making it difficult to see and draining his health. The best way to get rid of darkness is to listen for the bleating of a goat, which will lead to a goat head that Hotspur can shoot, “because goats eat everything — even darkness.” Enemies remain coated in an inky goop that Hotspur must remove with light — either by hitting them with his Johnson, blowing up light barrels, or using his light gun — before he can use his regular weapons on them. Johnson can be used as a melee weapon, but he can also turn into a pistol (called “Boner,” because it fires bones, and I wonder why else), a shotgun, and a machine gun. Demons drop red gems that can be used to improve the guns’ attributes (such as clip size and rate of fire), and blue gems will allow Hotspur to upgrade his weapons entirely.

According to the EA rep, Suda wanted to bring a B-movie “grindhouse” feel to the proceedings, which is why Shadows features awful accents; cheesy, puerile humor; and visual filters such as film grain and vignetting. The rep mentioned influences such as Robert Rodriguez’s Desperado and Sam Raimi’s Evil Dead series. Hotspur sports a leather jacket and spouts gloriously ridiculous lines like, “My wrath is your hell!” There’s also Suda’s own peculiar humor; one segment of the demo featured a gate covered in glowing purple bramble — demon pubes. Charming! Suda’s vision of hell, like No More Heroes, is very over-the-top: the gate to hell is a large structure with a massive, carnival-esque “Welcome to Hell” sign sitting on its roof. 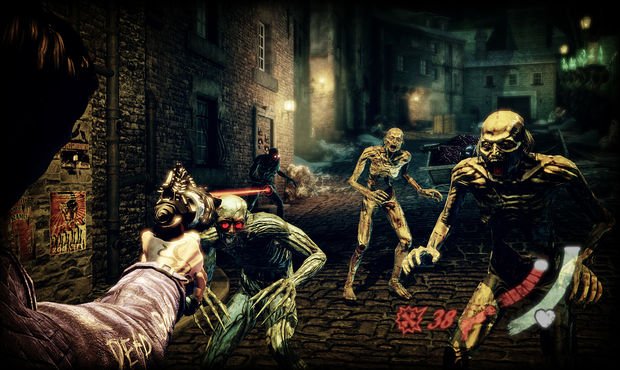 The darkness in Shadows will also introduce puzzle elements — in the demon-pubes section, a large hand sat on a platform spewing darkness into the area, and the gates were adorned with babies’ heads that required sustenance (in the form of eyeballs and brains) before they would open. The gradually approaching wall of darkness forced Hotspur to be quick, and it included the additional concern of more demons. Enemies will hang out within the darkness, since they’re much stronger there, and in this case, Hotspur had to temporarily endure the darkness to solve the puzzle. He fed the babies in order to open the gates and gain access to a goat head and the staircase that led up to the hand. Once there, he merely shoved his Johnson into its palm in order to stop the darkness from coming out.

After this segment, I saw the loading screen before the next area; in what the rep described as a “Suda touch,” the screen features a creepy two-dimensional animated map of hell, tracking your progress through the game. Once the chapter loaded, the rep explained that the boss in this section is George, a gluttonous beast with a harmonica lodged in his throat. Each boss has a particular backstory that will be logged in the game’s “Johnsonpedia,” a chronicle of Hotspur’s journey. One of Fleming’s favorite things to do is mess with Hotspur’s head by showing him visions of Paula in a white corset — this particular one was darting around an open-air meat market, and at one point, her head fell right off before she calmly screwed it back on. Right then, she began convulsing, and ripped herself in half to reveal George. That was where my demo ended; the rep teased a “kick-ass” boss battle. 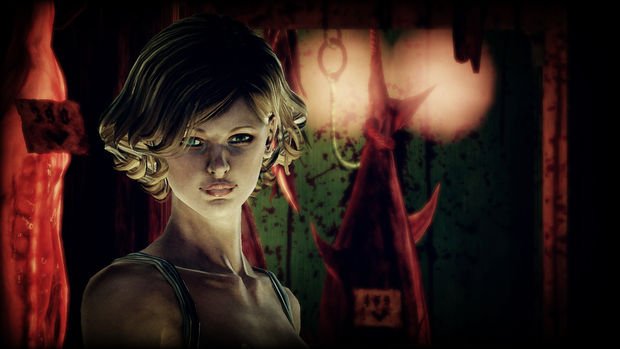 So far, Shadows appears to be a fairly conventional third-person shooter with some interesting gameplay conceits (the darkness, Johnson) and a hell of a lot of style. (This is Suda’s first game on the HD platforms, and the Unreal Engine really lets his artistic vision shine through.) I’m curious to see more of its psychological horror elements, like the stuff with Paula, as well as to find out more about the story in general. I can’t comment much on the score, since the noise level at the press event covered up the game’s sound, but I’m sure Yamaoka’s orchestration will bring a lot to the table. The sum of the parts of Shadows of the Damned sounds appealing enough, but I’m hoping the final product will offer more.