The Gundam series is unarguably one of the most influential anime series to have ever left the shores of Japan. I mean, what’s not to like about it? It has giant robots, crazy space battles, and enough compelling content with the myriad animations, toys, and videogames it has conceived to last a lifetime.

The latest to join the ranks of (its often mediocre at best) videogame entourage, is the free-to-play, MMO third-person shooter SD Gundam Capsule Fighter Online. A collection of Gundam’s past and mostly present — containing mechs up to the Mobile Suit Gundam 00 series — fans of all ages have a lot of nostalgia to discover when this game blasts its way onto PCs next month. 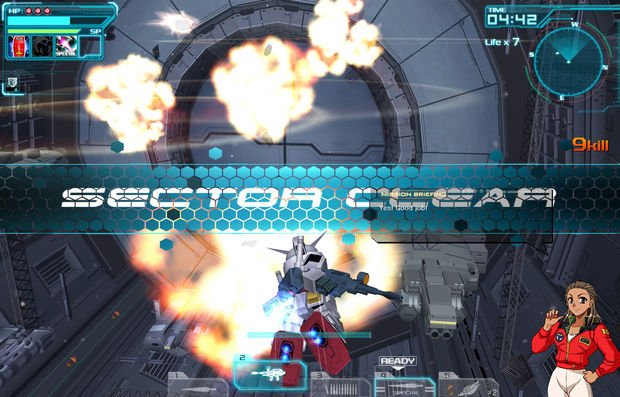 The first thing enthusiasts will notice about SD Gundam Capsule Fighter Online is (like the “SD” suggests) this title brandishes the super-chibi style of Gundams that are fun for all ages, and not the traditional style mechs of the animes. Some may be disappointed with this design choice, but it’s hard to be upset for very long once you see how adorable these tiny little badasses are in action.

Perhaps what makes them so infectious is the games unique and clever way of distributing each Gundam. Whether it be through real or in-game currency, players unlock new Gundams by spending money on capsule machines. (You know, the things you once crammed quarters in at the front of the grocery store to get a giant sticky hand or stale skittles.) The thrill of opening up these rare and powerful Gundams adds tremendously to the game’s childlike charm, but it’s not the only means of acquiring powerful units. Blueprints are also offered as a way of cashing in lower-level Gundams (as spare parts) to make stronger mechs for those who have bad luck with the capsule machine’s randomness. 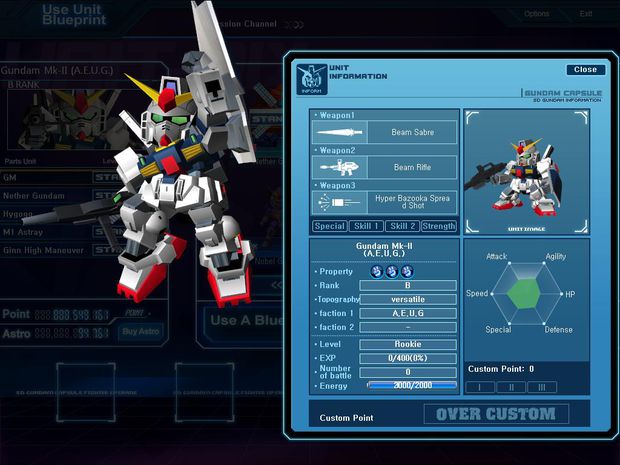 Every Gundam can also be fully customized when it comes to paint and stickers — just like building a model kit at home. Paints can be added individually or, for faster results, by using preset schemes and there are even high-gloss finishes. Unfortunately, there’s no mixing and matching of parts to create crazy Franken-Gundams. On top of altering the look of each Gundam, players can also adjust the skills of their mechs with experience earned from battles. With the right augments, a class C Gundam can hold its own against a more powerful class A, which currently is the highest rank.

Combat in SD Gundam Capsule Fighter Online is very fast and intense — at least in the co-op mission I played during my preview. My first go tossed me, with a developer of the game, into a highly chaotic fight where we were tasked with taking down four much larger “boss” Gundams. As someone who is used to the traditional WASD keyboard and mouse setup, getting the feel of my mech was instantaneous. Scrolling the mouse wheel (as well as the 1 through 4 keys) cycles weapons and double tapping any direction results in a quick effective dash.

With this knowledge at hand, I was ready to make scrap metal out of the opposition with my sword and blaster. Trying to run and gun by yourself will — as I quickly and repeatedly found out — lead to very fast death. Fighting the giant Gundams with their irksome troops running interference, on first attempt, proved to be too much for us. It’s not a one-death sort of situation in a co-op mission, but boss Gundams can pack a series punch — which for me meant getting constantly trapped in its deadly laser blasts — leading to many deaths and our ultimate failure.

But we were not going to let this defeat crush our spirits. Enlisting the help of a third player (co-op supports up to four) I took, along with my team, a newly found respect for the tactical aspect of SD Gundam Capsule Fighter Online‘s skirmishes. The city environment our encounter took place in offered many tall buildings to snipe and hide from. This cover became extremely beneficial when the boss Gundams would fire their massive laser beams. With this much more coordinated attack, we were able to effectively draw fire from our enemies and flank them ’til victory was had. The game may have a simple look, but fans of Gundam young and old will find plenty of challenge in the tough-as-nails AI. 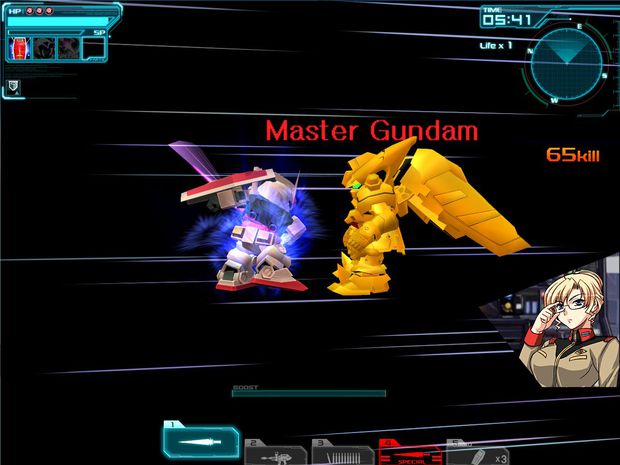 As a third-person MMO (I use that term loosely), SD Gundam Capsule Fighter Online‘s biggest draw is in its player-versus-player combat. Up to 12 players can duke it out in four different modes that range from points, tag, stock, and greed. Battles can range anywhere from 6v6 down to smaller 2v2 matches and some modes even allow for units to be swapped during the middle of combat from a support ship.

While I didn’t get a chance to try this mode out, it’s apparent from a design standpoint that PvP is the game’s focus. There are 30 PvP maps to fight in, where as of now, co-op only offers nine missions and the brief single-player only has two.

SD Gundam Capsule Fighter Online has a simple look, with very generous minimum computer specs needed to play, but the combat mechanics strike a balance that should offer a rewarding experience for those who invest the time. I only worry that there may not be enough content to keep the more casual fans entertained for the long haul. Regardless, diehard Gundam followers have a lot fan service to look forward to when the game launches in early December.