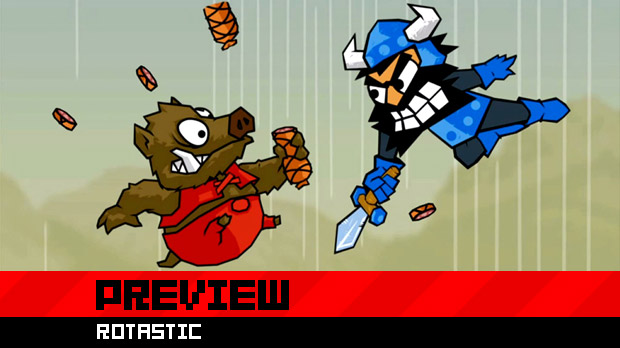 Rotastic is a pretty hard game to describe but an easy one to define. A description would probably be best put as Cut the Rope crossed over with Bejeweled, all wrapped in the aesthetics of Castle Crashers.

The game’s identity and definition are fun through the simplicity of arcade conventions such as high scores and leaderboards. It imitates the best of its contemporaries to relativity tepid effect.

There is no apparent story or backdrop to Rotastic, with the focus being entirely on gameplay. Consisting of swinging from different pegs on a 2D plane and collecting as many jewels as possible along the way, it handles well and was easy enough for me to understand after a few seconds. Other controls include the ability to extend the rope by holding the A button and reversing the direction of your rotation by pressing the right bumper.

There is some light-meter management built into the swinging mechanic, but it’s nothing too deep. Players have a white meter that whittles away the longer you stick to one peg. This encourages you to constantly stay on the move as pegs will break once the gauge depletes.

You can also gain an orange meter which acts as a shield in boss fights and the multiplayer mode. When going up against bosses and other players, you can cross over each other’s ropes and cut your opponents. The orange meter basically acts as a second chance, immediately spawning you an extra rope.

There is also a trick mechanic that rewards players with bonuses (such as the aforementioned shield) and score multipliers. Multipliers gained by tricks (figure eights and the like) can be further compounded by smaller feats like collecting a certain number of the same jewels in a row. Some stages in the game include secondary objectives that encourage completing specific tricks, but these can be ignored or the level skipped entirely.

Just remember, skipping levels affects the amount of unlocks and leaderboard placement. Unlocks in Rotastic are limited to character selections though, and since all the characters play exactly the same it remains to be seen what real rewards you would be missing.

Though the 69 levels in Rotastic are primarily centered around collecting gems, there is also some variety thrown in with the inclusion of block-breaker levels, in addition to a few odes to classic games. From Space Invaders-themed boss fights to block-breaking a giant Pac-Man, there are a few less-than-subtle nods.

As mentioned in passing earlier, Rotastic also includes its own multiplayer component and three modes to go along with it. There is a deathmatch mode where players try to cut ropes until one kills the other ten times. Further competitive modes have players racing to collect 100 gems and another has you racing for the highest score in a certain amount of time. The multilayer maps have a pretty cool feature where they are separated by level of difficulty, the harder ones having more hazards and traps to look out for. All these modes can be played with four people and AI bots to fill up any empty spots if desired.

With chaotic fun multiplayer and an obligatory single-player mode, Rotastic can be simple casual fun at its best. Other times, I wonder if its simplicity could lose player interest fairly early, especially when there doesn’t seem to be a solid reason to continue playing outside of leaderboard rankings. You all can see for yourselves when it hits Xbox Live Arcade on September 21st.