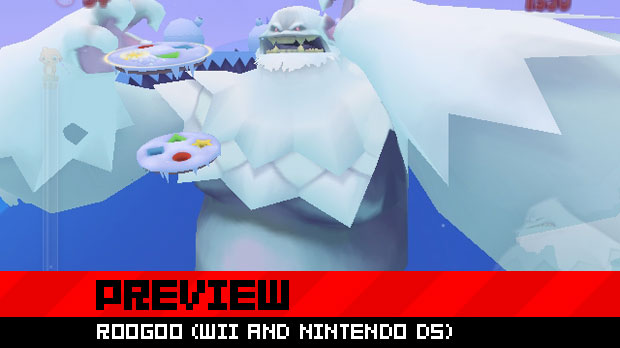 , I would argue, was the most under-appreciated title of 2008. How can I say this? Well considering it has a Metacritic score of 78, there is an adorable main character, and it came out last year to almost no fanfare, I can generally assume that most people passed right over it.

Which is a drag, as anybody who has at least played the demo for Roogoo on Xbox LIVE Arcade can agree that it is an amazingly charming game. Maybe we can attest this problem to the fact that Roogoo might not have originally come to the most appropriate console. I mean, the Xbox 360 is known more for its mature content than a mascot-driven puzzle game. So it makes sense that developer SpiderMonk Entertainment and publisher SouthPeak Interactive have moved along with the franchise to more colorful pastures. And by “pastures,” I mean the Wii and Nintendo DS.

Hit the jump for my impressions of the Roogoo: Twisted Towers for the Wii and Roogoo: Attack for the DS.

First of all, I’m just going to lay it down plainly: if you have an Xbox 360 or PC, download the demo of Roogoo. It’ll only take a few minutes, and it’ll give you the best impression for coming into the game. For the rest of you who are too lazy to check out the original Roogoo, here’s what it is: Roogoo is an action puzzle game, where you have different shaped “meteors” (such as stars, boxes, triangles, and more) that fall. The goal is to get a certain number blocks through slots in a rotating disk. It’s the player’s job to rotate the disks to get the right blocks to fall through the right slots.

All of this sounds very simple, and it is. But like any puzzle game, things become complicated by increasing falling speeds, additional meteor types, enemies blocking slots (that must be smashed in the head with a quick-dropped block), as well as the collectible stars that will double the amount of blocks currently falling. Deal with all this, and get as many blocks into the bottom rung of rotatable disks, and you’ve beaten the level.

So that’s Roogoo. However, now that the series has jumped to the Wii and DS, things are going to get a little bit more complicated. First, Roogoo: Twisted Towers for the Wii is loaded with all sorts of motion control goodness. You still rotate the disks using the triggers (Z and B), but now you can solve problems with more than that. Say you see some Meemoos (the enemies of Roogoo) blocking a slot. Instead of having to quick-drop the blocks on the guy, now you can point at him and press A. You hammer the dude, clearing the slot for the rapidly falling blocks.

Another option is the pointer as a butterfly net. Floating around levels are now butterflies and bats, and you can snag them for bonus points. That net serves an even better purpose of saving your ass if you screw up and force blocks into the wrong slot. Instead of bouncing off to the abyss (and contributing to your failure at Roogoo), you can catch the blocks with the net, which will then not add to your failure bar.

Other motion controls lean toward the novelty. For example, one level required you to shake the Wii Remote to turn the falling blocks into a drill. This will clear out any obstacles in the way, and will drill through a clogged slot. Also, at times your screen will ice over due to a multiplayer power-up, or a boss attack (which is new to the series) and you have to wipe off the screen to see the action. Finally, there are bonus levels where your little Roogoo will have to parachute downward, dodging Meemoos and collecting shapes.  For the Wii version, you’ll have a pointer to shoot baddies, and for the DS you can use the stylus, which is the only special DS functionality for Roogoo: Attack. That version plays out much more standard, with the trigger buttons controlling rotation, and A controlling the quick-drop.

Multiplayer for both versions is built right in. While there is no online like in the original XBLA release, Roogoo: Twisted Towers and Roogoo: Attack are both full of multiplayer options. Roogoo: Twisted Towers has a two player versus mode, which is a race to see who can finish a puzzle faster, as well as who can get the higher score. There is a co-op mode, where players alternate between controlling disks and compete to both finish a level as well as get a higher score. Finally, the entire story mode on Twisted Towers (which is the same across all versions of Roogoo, XBLA included) can be completed cooperatively:  one person rotates, and another catches butterflies, bats, lost blocks, and hammers Meemoos.

The DS, while only retaining versus mode, has a neat trick. First of all, the entire versus game can be played single-cart; any level you’ve unlocked, your buddy can play versus, too. That’s always nice for poor gamers. For both versions, multiplayer seems to be a lot of fun, with barrages of power-ups (like fast-falling anvils, slowing feathers, the screen freeze (Twisted Towers only) and others making things very noisy and fun. The DS might win in this mode, however, as up to four players can play, where as the Wii version is limited to two.

Finally, if you are a fan of Roogoo, you might want to get both Twisted Towers and Attack, as SouthPeak Interactive has priced the Wii and DS versions at $30 and $20 respectively. Since you can unlock new levels if you own both (bringing Twisted Towers a total of 91, and Attack a total of 110), and each level is unique to the system. For fifty bucks, you get over 200 individual levels.

Ultimately, if you are a fan of the original, both Roogoo: Twisted Towers and Roogoo: Attack should certainly get you attention. Although the story isn’t any different (a silly plot that involves the cutest main character known to man), the puzzles are, so that’s definitely a boost. And while the Wii version obviously looks better than the DS, the gameplay remains the same at its core. I would definitely recommend checking out the demo available on the 360 and PC, as it’s already a confirmed solid game. Hopefully, Roogoo: Twisted Towers and Roogoo: Attack can both live up to the promise of being great games, as well as become appreciated by the public.