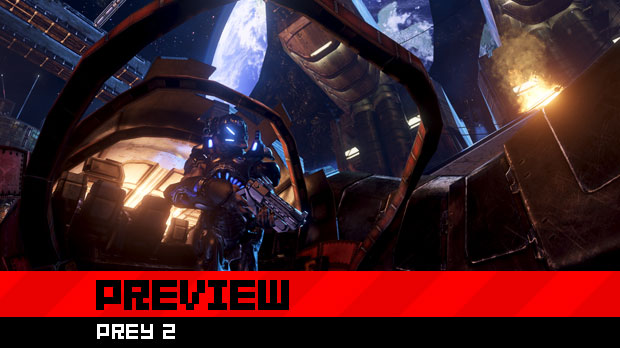 It’s July 11, 2006. Seajay AirFlight 6401 is doomed. As the jet makes its way over Oklahoma, the passengers — including one U.S. marshall Killian Samuels, Prey 2’s protagonist — have no idea what’s in store for them.

Aliens are doing what they do best, and that’s invading our world. Flight 6401 and its passengers are a casualty. The extraterrestrials abduct the ship and the people on it, smashing it into their alien space craft. When Killian comes to, two things are obvious: he’s still alive, but definitely not in Oklahoma anymore.

For folks who played 2006’s Prey, the set up for the sequel may seem vaguely familiar, but its main character certainly will not. Killian has replaced Prey‘s Native American protagonist Tommy, that’s for certain. But there’s a connection a few might have missed: during the opening sequence of Prey, Tommy is witness to the disaster of Seajay Airflight 6401. When he reaches the wreckage to investigate, all of the passengers are mysteriously missing.

The story of Killian and Tommy, it seems, may intertwine more than Human Head is ready to let on right now.

“What can we do with the [sequel] in order to explore other parts of the Prey universe?” That’s the question developer Human Head Studios asked itself, says Prey 2 project lead and studio co-founder Chris Rhinehart. The idea, he says, is to give the studio breathing room to build and expand the franchise. Their answer was looking at what he calls the “core” of Prey.

“One of the things for me that was the core of Prey was the fact that we took the player to a new place that they hadn’t really been to before,” he explains, “and let them experience new gameplay mechanics that they had never seen before in a first person shooter.” 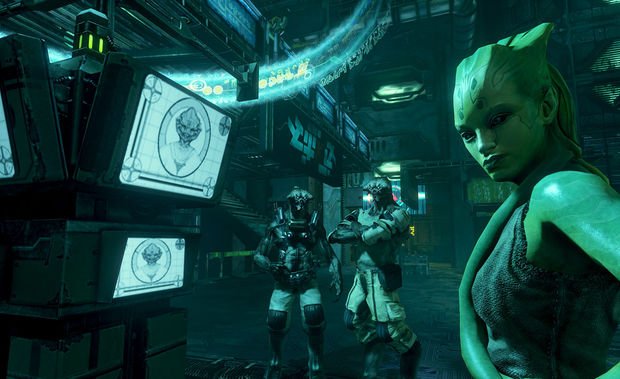 Gone are the portals and the game’s life-after-death “Spirit Walk” sequences. Those abilities and that gameplay were part of Tommy’s story, says Human Head. Killian, as a U.S. marshall, has a whole new set of skills. The result is a game that seemingly mixes and shakes up some of the best mechanics of the most notable games of the past few years.

The demo we’re shown begins with Killian waking up in the wreckage of Flight 6401. Not unlike the opening sequence to BioShock, Killian’s vision is cloudy, and he’s confused as he comes to. He’s no longer on Earth, evident by the fact that, off in the distance, you can see the Blue Planet sitting in its orbit off in the distance.

Fortunately, as a U.S. Marshall, Killian still has his firearm on him. Concerned he may be in hostile territory, he pulls his gun and makes his way for the detached, burning cockpit of the aircraft that he sees off in the distance. His concerns of hostility are soon realized, as he’s soon attacked by aliens brandishing laser guns.

Here we get a chance to see Prey‘s expanded cover system. Killian can easily hide behind cover, popping out to aim with his pistol or even blind fire. He can also hop over cover, and we see him gracefully jump over obstacles while rushing to another cover point. 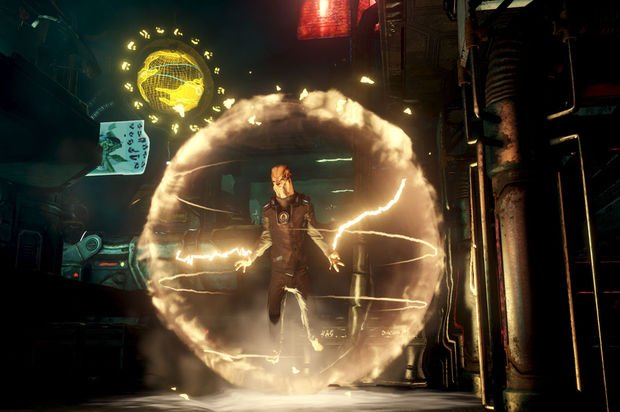 His agility can only get him so far, as he’s soon shot down and surrounded by slaver aliens, one of which knocks him unconscious with the butt of a pistol. What happens next is kind of hazy.

“Killian wakes up and he’s on this distance planet known as Exodus,” says Rhinehart. “He quickly realizes that he’s been there for a long time, years in fact.”

He’s mostly forgotten his past, outside of that nasty knock on the head from the Slaver Alien. So he does what any good U.S. Marshall in his situation would do — he uses his skills to become an alien bounty hunter. Obviously. In doing so, he’s made a lot of friends… but far more enemies. Prey 2, Rhinehart says, is about uncovering Killian’s past, discovering what’s happening on this world of Exodus, and “uncovering his larger role in this world.”

“This world” as it turns out, is an open one. Yes, “open” as in Red Dead Redemption open world in first-person. The world is vast, Exodus a tidally locked planet, meaning that one side perpetually faces the sun with the other in the dark cold. The portion of Exodus we’re shown for this first-look demo is somewhere in the middle, eternally in the dusk. It’s in the Central City Bowery, the red light district of the world. It’s full of crime and grit, the perfect place for a criminal and great business for a bounty hunter.

Human Head is calling the visual style its shooting for “alien noir.” We see what looks like an industrial city in the sky, with tall skyscrapers snaking up towards the sky. Neon signs dot the landscape, pointing to seedy nightclubs, casinos, and strip clubs that are home to holographic, scantily clad dancers. My first reaction is to draw parallels to Blade Runner, but where the 1982 film had hint of familiarity in its architecture, Exodus is decidedly alien in its construction. 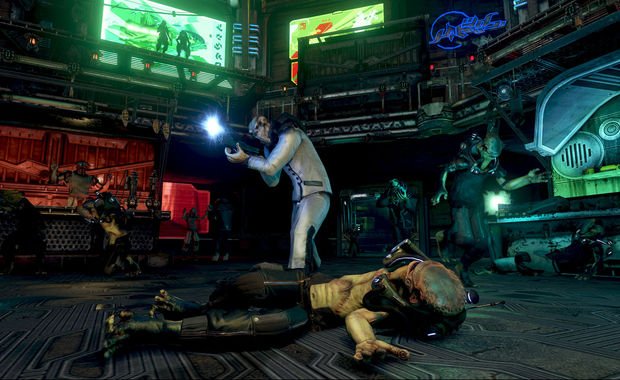 The city’s verticality, along with Killian’s job as a bounty hunter, leads directly into the game’s expanded first-person movement system. Players can not only run, jump, and dive, but they can vault over things as we saw in the game’s opening sequence. You can also use Killian’s abilities to climb ledges, even from a running jump. You’ll not only use your climbing skills to gain ground on your enemies or reach new heights, but you can use it for cover as well. During a few points in the demo, we’re shown Killian holding on to a ledge, peeking over with his gun and shooting as he grips the edge.

In addition to expanded movement, Human Head is also focusing on player choice.

“Our biggest thing with this is we knew that in order to make a first-person shooter that was going to make a splash and be interesting, and exceed player expectations for 2012, we knew we had to do more than just run gun and shoot,” explains Rhinehart.

As a bounty hunter you get to choose where you go, when you go there, and how you do it. You’ll also have a wide variety of gadgets at your disposal, and you’ll be able to utilize them differently depending on how you want to play. If you want to go into a situation guns blazing, you can, using the game’s expanded cover system along the way. Or take a more stealthy approach, utilizing the open, vertical environment to get a jump on your enemies.

In one side-mission we were shown, Killian walks into a bar and uses a scanner that sends a pulse out into the room. This makes characters of interest that are in the area glow; green NPCs are innocents, whereas other colors — like yellow, for instance, are possible targets. Killian spots one bounty, and the scanner notes that he’s wanted dead or alive. Once the target notes he’s been spotted, he takes off running. This particular chase doesn’t last long, and he’s soon shot dead; Killian receives credits for his “capture.” 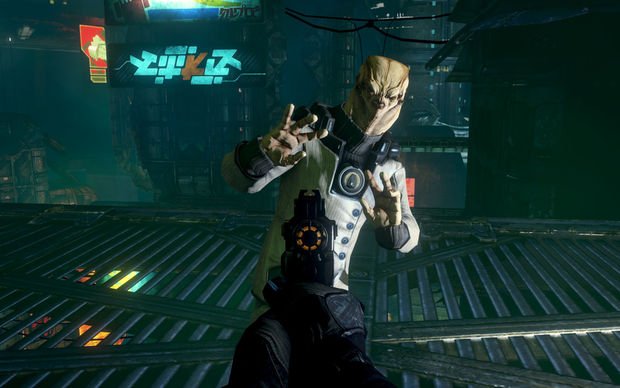 Rhinehart notes that not all of the game’s wanted criminals will take off running. Some will immediately fight back, and even have goons around for back up. Others can be made to surrender. While moving around the world, it’s possible to holster your gun; when drawn in specific situations, it can be used to threaten enemies or even “mug” and take their credits. In one instance, we see Killian draw his gun on an small alien creature, who immediately throws up his hands in resignation.

The second mission we see is a bit more complicated. After getting a tip from Krux, an underworld informant (who got a gun pointed at his face instead of the credits he demanded for info), Killian locates a criminal named Dra’Gar. Wanted by the “client” alive, he has to take a careful approach to this situation. Entering the club, he grabs one of Dra’Gar’s lieutenants, using him as a meat shield. Gun drawn, he enters the club in hopes that his collateral will give him the edge. It’s soon clear that Dra’Gar doesn’t care much for his underlings, when he commands his hooligans to open fire. Headshot: the lieutenants skull explodes like a soggy melon, and Killian is forced to toss the body aside.

Dra’Gar, as you’d expect, makes a run for it. He’s quicker than the previous bounty, and he’s got an advantage — he can teleport. He’s also got what appears to be an army of enforcers at his back. What ensues is an on-foot chase peppered with firefights. At one point, Dra’Gar enters a dark nightclub; Killian switches on the Lumisight gadget, which works like night vision goggles to see. We also see other gadgets in action, like the “Micronova Grenade” that creates a vortex that lifts enemies up in the air and leaves them vulnerable.

The chase is significantly longer and more dangerous than the first one we were shown. It winds through the city at a brisk pace, and at one point Killian even has to move across a set of moving subway trains to reach his target. Dra’Gar is eventually cornered, and surrenders but offers a deal: he’s willing to give you more credits than you’ll get for his capture if you choose to let him go. 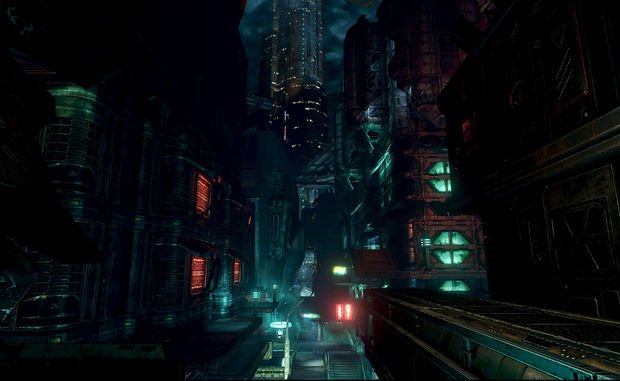 Killian, in this instance, does the “right thing” and instead opens up a portal and ships him off to the “client.” Before he sends him off, he has one more option — he can interrogate him with a series of “zaps” to gather  story intel that may open up new missions. The downside: interrogate too hard, you may kill the bounty.

Player decisions like these will move an internal moral compass that Rhinehart says is closest to Red Dead Redemption‘s “Honor” system. Do good things, it goes up; do bad things, and it will go down. This will have various effects on the types of mission you can get and more.

Going around and doing whatever you want is an option, but one that may be met with resistance. Rhinehart demonstrates this at one point by pushing an innocent off a ledge. A large “eye in the sky” security system comes down to issue a warning; pushing a person to his to death apparently isn’t a punishable offense. But bigger crimes will draw heat, not unlike other open world games like Rockstar’s Grand Theft Auto series.

Human Head says there will be a number of mission types players will encounter in Prey 2, outside of the basic “find a bounty and take ’em in or take ’em out” variety. We saw one example of this where Killian used his scanner to follow a DNA trail, and there was even a large mini-boss fight that ended the our first look.

There will also be light role-playing game elements when it comes to obtaining and upgrading gadgets. Rhinehart says there are roughly 20 different gadgets in the game, with about 40 total upgrades. Killian has a set of hover boots, for example, which allow him to safely glide between platforms. Upgrades to the boots will determine the distance they can glide  or how quickly they’ll recharge for use. A shoulder rocket gadget can be upgraded to carry more missiles or even how many you can launch at once.

If after hearing more about Human Head’s sequel you’re still missing Tommy, take note: Killian will, at some point, run into Tommy on Exodus. While the specifics are being kept under wraps, it’s being hinted at that he may play a larger role than you might expect.

When I flat out asked Human Head co-founder Jim Sumwalt what Tommy’s role would be in the game and even if he’d be playable, he hesitated before saying “Uh… can’t speak to that.”