Is the whole “Marvel versus DC” thing still a thing people bark at each other over? Well, the DC universe has its own cleverly titled MMO, DC Universe Online, leaving Marvel to play catch up with its equally cleverly titled Marvel Heroes.

Of course, the differences in the games are plenty, not the least of which is that Marvel Heroes will be free to play. Yes, the dreaded acronym that leaves hardcore gamers recoiling in disgust, hissing from beneath flower planter in the garden of the current videogame industry.

Anyone who will be at San Diego Comic-Con in a couple days can check the game out for themselves; for the rest of you, I’ll tell you a bit about it. 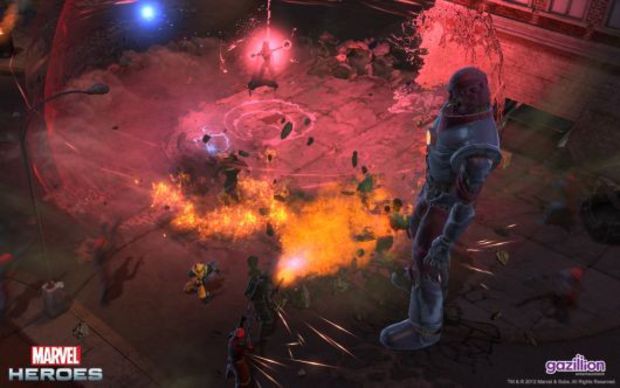 Marvel Heroes runs on Unreal Engine 3, continuing the trend of free-to-play multiplayer games that look quite nice. From the isometric view, you can scroll to zoom in and out if you want to get a closer or more distanced view of the action. As I pulled the camera all the way in to check out my hero’s threads, I could appreciate the comic-book simplicity and overall cleanliness of the art direction, which feels something like a natural evolution of Marvel Ultimate Alliance’s style.

The isometric view isn’t the only parallel the game has to the recently released Diablo III. The click-to-move system is the same, holding shift precludes your character from moving while attacking, and loot drops bear randomly generated affixes. On top of that, there is a clear narrative, penned by big-time Marvel writer Brian Michael Bendis (Ultimate Spider-Man, New Avengers), which harks back to a late ’70s/early ’80s story about a group called the Purifiers, which seeks to wipe out all mutants — what else is new? — in the name of god.

While certain scenes are going to play out in motion comic form, the fact that an overarching narrative exists is going to have a palpable impact on the game, as opposed to simply being a framing mechanism for the beginning and end state. I’m told there won’t be standard “kill x amount of x enemy” quests, nor will you be inundated with useless quests. Rather, you’ll have a few sidequests with story implications in the hub areas, as well as a few you might run into when you’re gallivanting about playing superhero. I’m all for getting rid of superfluous quests and repetition. 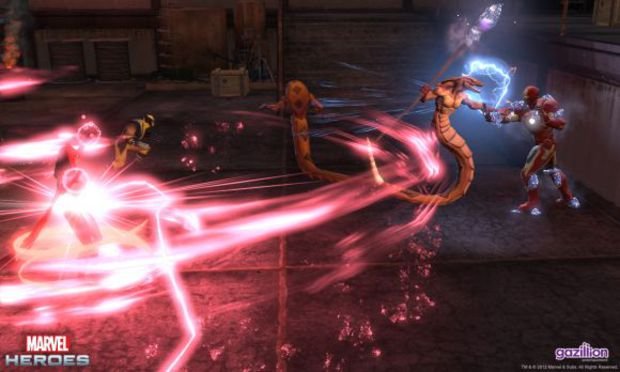 During my hands-on time, I checked out Iron Man and Wolverine and fought alongside both Scarlet Witch and Hulk. Heroes are afforded four ability slots in addition to their left and right mouse click attacks, some of which are hero specific and some of which are general use. As you play, you build up a large repertoire of skills and find both new ones and improved versions of the ones you have.

The Wolverine I used had a great skill equipped that was a circular swipe, which was great for taking out crowds, especially when combined with his standard right click, a homing slash. While Wolverine played as the fierce bruiser you might expect, Iron Man was decidedly flashier and shared a lot of similarities to the current film interpretation; in fact, his default costume was the film version. Two particularly great skills the tin man had are an uppercut that suspends enemies long enough for a volley of projectiles to pepper them, as well as a stylish fist to the ground which has a fairly wide area of effect. Scarlet Witch’s focus was ranged attacks, while the Hulk was the expected offensive, smashing powerhouse — he can even throw cars for big damage.

The hugely variable skill sets also help differentiate heroes when multiple people are playing the same one, as the game won’t wall off heroes other players are using. On top of that, there are a number of different costumes to choose; I found two alternates in addition to Wolverine’s starting costume just in the bit of the game I checked out. 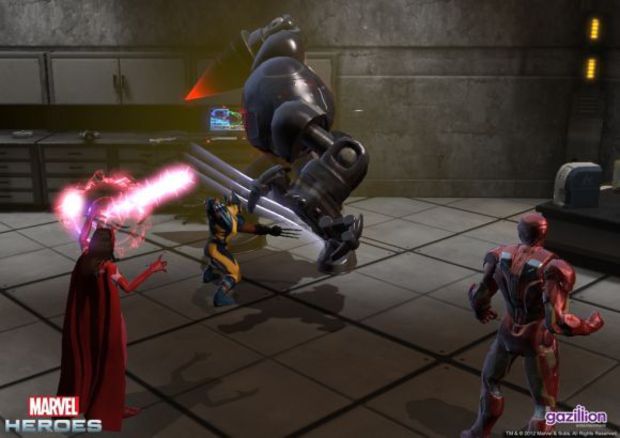 In addition to hub areas like Professor Xavier’s School for Gifted Youngsters, Marvel Heroes has randomly generated public areas where people will be milling about, working on their own quests and the like. In these areas which are going to randomly generated daily, public events pop up that anyone can join in on. In our demo, a Sentinel showed up out of nowhere and our party took him out for some fat loot. Thankfully, whatever loot appears on your screen is your own loot; Marvel Heroes does away with a general communal loot drop, circumventing fights over who gets what and disappointment for people who might otherwise draw the short straw and get the most rubbish bit of the drop.

As our quest approached its end, we reached a private instance fight against Magneto, who was holding William Stryker hostage for his role in supporting the Purifier loons. From there, I assume the plot is going to spiral out of control in superhero comic fashion, twists abound. What I do know is that I gave Magneto quite a whooping, twice, despite playing characters that are covered in metal — obviously that specific power of his coming into play wouldn’t be fair. That being said, the Magneto boss fight was pretty fun, as Magneto had enough moves to force to you switch up what you’re doing every once in a while.

The president of Gazillion Entertainment, the studio that’s making Marvel Heroes, is David Brevik, Blizzard North co-founder and creator of Diablo and Diablo II. They’ve got an award-winning comic writer writing the game’s story. It’s going to be free to play and what I played was pretty fun. Plus, Gazillion has a ten-year exclusivity contract with Marvel and updates to the game are going to be flowing in at a constant clip. If you like superheroes or MMOs, I don’t see any reason not to give this one a shot when it drops.