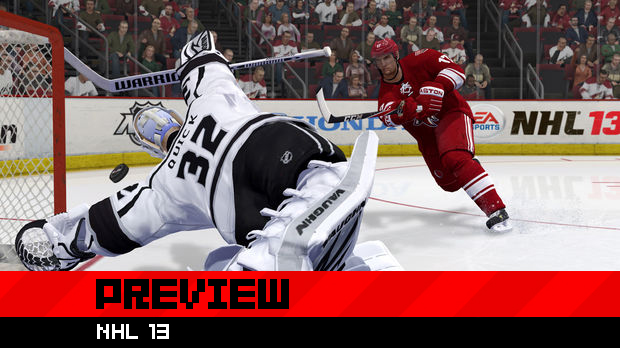 EA’s NHL series has been pretty damn great for a while now, and the latest entry in the franchise shows no signs of mucking up its track record. The team is sticking to making great hockey games. No plans to just skate on by here; the plucky team is setting lofty goals, as hokey as that might sound to those who claim all sports games are mere roster updates.

In his review of NHL 12, the immortal Samit Sarkar maintained the greatness of the series’ previous entry, but said that 12 had more subtle improvements than flashy ones. With NHL 13, however, EA is promising the most substantial between-iteration changes that the franchise has seen in a while. 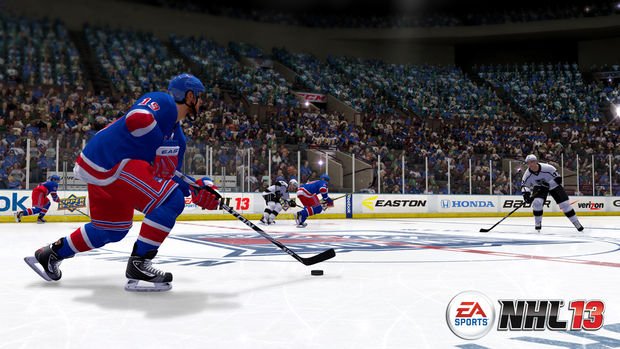 NHL 13’s new True Performance Skating system is the highlight of this iteration’s developments. Though a player’s skill on skates is essentially the crux of their overall playing ability, skating in the series has never amounted to anything other than holding down the analog stick to fly around. While that’s all well and good for someone like me who plays the series casually, I’m sure hockey buffs get irked by the unrealistic movement.

True Performance Skating adds over 1000 new animations to the physics-driven skating system. EA touted the more realistic reflection of momentum, and I noticed it immediately during my hands-on with the game, whether it was when I crashed my player — hard — into the boards, trying to turn on a dime, or finding myself unable to level opposing players when I didn’t have much momentum behind me.

In his aforementioned review of NHL 12, Samit was a bit irked that the newly implemented full contact physics engine didn’t always work quite as you might expect it (tiny blokes still being able to check opponents that towered over them, etc.), but the game I played pointed towards a much more realistic representation of physics. The physics system is said to have been applied to players’ individual limbs, making momentum important, while also emphasizing more subtle gameplay, like jostling or generally manning up against an opponent to keep them slowed and off balance. Similarly, and as I mentioned, it is no longer an easy feat to turn on a dime and shake defenders. 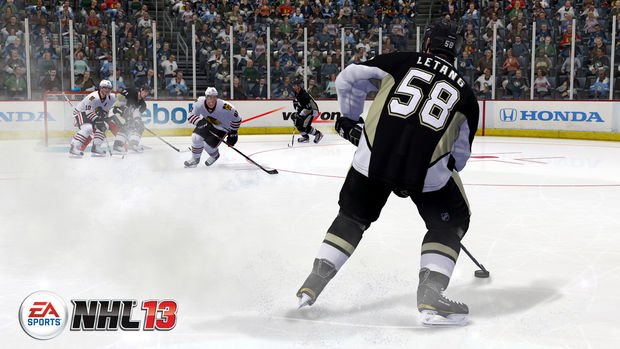 The other touted addition to NHL 13 is its revamped AI, the EA Sports Hockey I.Q. In previous NHL titles, player awareness was restricted; players were only cognizant of other players in their immediate vicinity, while goalies only focused on the opposing player in control of the puck at any given moment.

Probably because of all the punches to the face.

Now, all players are entirely aware of everything going down on the ice. This smarter, more aware AI will theatrically lead to a more true-to-life hockey experience, and less little unrealistic oddities cropping up which take you out of the game.

There are a few other new additions to NHL 13, including the new true broadcast view. I played about half in the broadcast view and it’s a pretty rad thing. It’s a bit jarring to get used to the horizontal orientation, especially if you’ve been playing with the franchise’s standard vertical view for a while, but it works well. It looks like you’re watching hockey. 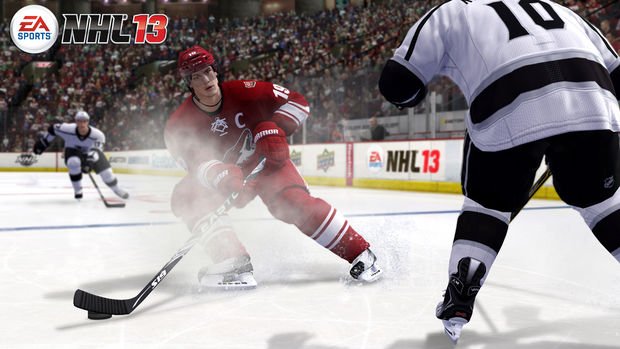 The previously offline Be a GM mode is being taken online, allowing you to build and manage teams with — or, I suppose, against — pals. EA is working on a mobile management companion as well, if you’re totally into it. Also coming is NHL Moments Live, which might sound familiar to anyone who’s played another sport game. Basically, you play out hockey scenarios that have occurred in real life and have to replicate them; for instance, nailing a comeback win with five minutes to go in a game. New moments from the upcoming season will be added intermittently (probably for a price).

If you dig the National Hockey League or just the series, there doesn’t seem to be anything to scare you off picking this one up. It’s still fun to play, it still has great analog control, and the implementation of the physics system seems to have gone more smoothly this time around.