Awhile back, Microsoft gave me the opportunity to update my retail Xbox 360 to the “New Xbox Experience,” a new operating system that changes the look and feel of what was formerly known as the “Dashboard.”

I had seen it in action at the Tokyo Game Show, when Microsoft’s Aaron Greenberg gave me a personal walkthrough of the update. It looked pretty and certainly functional, and while Greenberg talked it up all nice, I wasn’t entirely sold that it was better.

Well, whether you like it or not, it’s coming on November 19. But after two weeks of letting it sink in, one thing is definitely clear — the New Xbox Experience is an improvement on the now old-and-busted-looking “dashboard.”

Hit the jump for positives and negatives I took away from my time with NXE.

THE LOOK AND USABILITY

+ It’s far more colorful than the old Dashboard, with many new visual elements that make it pop. When browsing Xbox LIVE Arcade titles on the marketplace, you’ll see fancy box art; when selecting most titles, you have the option to view a full description, as well as view high resolution screenshots, and more.

+ Because it’s so visual, it’s easier to find what you’re looking for in any given menu. It might take awhile to adapt to the new menus, but once you do, you’ll find that navigation is far smoother and much easier.

+ If you hate the new look (you probably won’t), hitting the Xbox 360 guide button on your controller will bring up a streamlined menu system that looks suspiciously like the old dashboard. This is a good thing and comes in handy when you want quickly launch a game or check your friends list.

+ If friends are playing a game when you first boot it up, you’ll get a quick notification letting you know. This is particularly useful for multiplayer titles. 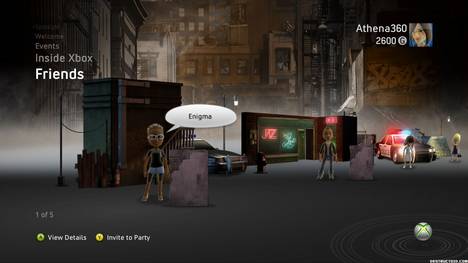 – When a notification pops up to tell you a friend is online, pressing the Xbox 360 guide button will no longer immediately bring you to your friends information. This makes spying on people much more difficult. Also, although the aforementioned “Friends playing X game” notification is nice, pressing the guide button immediately just brings up a list of ALL of your friends playing any game; it would be more useful if it would only display friends playing the same game.

– The “Friends” menu that allows you to scroll through a visual “neighborhood” featuring your friends avatars (both online and off) is a novel idea, but a bit pointless.

– There’s definitely a learning curve; when you first boot up the New Xbox Experience, it can be confusing. You’re going to have to hunt the first time you want to download a demo or dig deep to get some downloadable content. While nearly everything is available at the clicks of a few buttons, you can get lost in some of the new menus if you don’t know where you’re going. 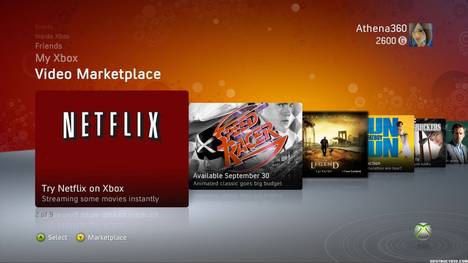 + This works as advertised, and will allow you to stream movies in your Netflix “watch it now” queue. After downloading the Netflix software, it spits out an activiation code that you must then enter at Netflix.com using a web browser. Once you do, your account is ready to go, and a horizontal view of “box art” for your queue is display.

+ The video controls should be familiar — they’re the same ones you use to control all media on the Xbox 360.

+ You can delete movies from your queue, rate movies, and see full descriptions through your Xbox 360.

+ Streaming quality is as good as you’d get on your computer using Netflix’s on-demand service. (This, of course, depends on your net connection.)

– There’s no way to add movies to your queue or browse movies you haven’t added to your queue on the Xbox 360. Using this requires the use of a web browser to add and move things around; there’s no built in functionality beyond viewing your queue. This, of course, could be updated in future iterations of the Netflix/360 software.

– Right now, Netflix doesn’t stream high definition. So compared to other stuff you’re probably watching on your Xbox 360, the quality hit is definitely noticeable. By the time the New Xbox Experience is available to the public, Netflix should be offering streaming HD movies (roughly 300 to start, from what I hear), and the Xbox 360 will support it. That’s good news indeed. 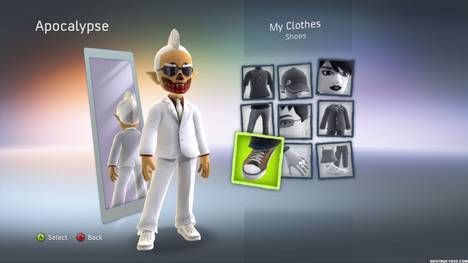 + There’s a decent selection of body parts, hairs, and clothes to start. It’s entirely possible to create a unique avatar and have a customized look. There’s even a monocole immediately available for Jim “I Wear a Monocle For Some Reason” Sterling.

+ You can take a picture of your avatar to use as your Xbox 360 gamer picture. The avatar can be posed and what not, so you can show off your identity via your friends list.

– Good luck making something that looks like you. Despite the variety of parts available, I simply couldn’t make a reasonable facsimile of myself. The only option is going to be going in the completely opposite direction — making a completely off the wall avatar, fans and all. A zombie, perhaps?

– My wife’s complaint: the girl’s clothing options suck. She even noted that the dress pictured used as an icon for the dress menu wasn’t even available (and it was the one she wanted to use).

INSTALLING GAMES TO YOUR HARD DRIVE

+ This is a relatively fast and easy process that can be done for any Xbox 360 (theoretically, although I didn’t try my entire library).

+ When a game is installed, the Xbox 360 is much, much quieter when playing. It will not sound like a jet engine. It is, I must say, quite fantastic.

+ I didn’t bust out a stopwatch, but the difference in load times is noticeable. As much as I loved the statistics Fallout 3 shows you during loading screens, I spent far less time looking at them after I installed the game.

– Not a huge hairy deal, but you still need to have to the physical disc in the drive to play the game.

– Fallout 3 took up 5.3 gigs; depending on the size of your hard drive, it could fill up fast. And Microsoft’s ridiculous and expensive proprietary hard drive solution means some gamers might still be stuck with a 20 gig unit (or have no hard drive at all).

A lot of what the New Xbox Experience offers is community and social functionality, like parties and games that take advantage of the avatars. Unfortunately, because it hasn’t officially launched yet, I didn’t get a chance to play around with those new features.

But the basic functionality of the Xbox 360 has most definitely been improved. Overall, everything moves much smoother and quicker, and it’s way damned prettier than it was before. And don’t be afraid of the avatars, either. While they may seem gimmicky (and they arguably are), they will in no way get in the way of your “hardcore” gaming experience; besides seeing it on the screen when you boot up, it almost never gets in your way … unless, of course, you want it to.

The New Xbox Experience update will be available on November 19.