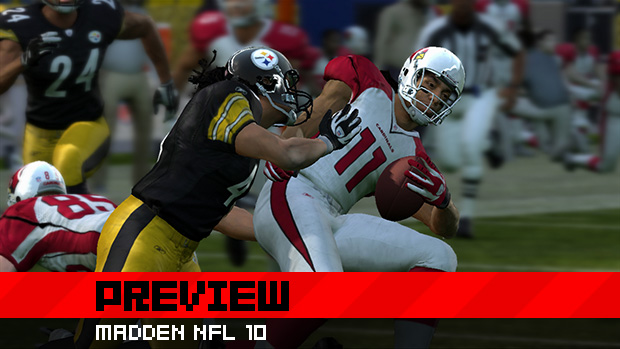 Love it or hate it, you’ve got to at least acknowledge and respect the massive cultural phenomenon that is EA Sports’ Madden NFL series. With over 70 million copies sold, it’s the best-selling franchise in the history of videogames. And just like every year, EA Tiburon is aiming to deliver the best iteration of Madden yet with Madden NFL 10, which will be out on August 14th with — for the first time ever — two cover athletes (Pittsburgh Steelers safety Troy Polamalu and Arizona Cardinals wide receiver Larry Fitzgerald).

At last week’s EA Season Opener event, I was given an eyes-on demo of Madden NFL 10. Interested in finding out what the new tackling system, Pro-Tak™, is all about? Then follow me to the jump.

EA Tiburon has been relatively transparent with the development process so far, and what has come across in every blog post and update is the dev team’s desire to build the most realistic version of videogame football ever made. And Lead Designer Ian Cummings told me that Tiburon is also committed to making the game feel “new.” There are two main fronts on which these goals are being accomplished this year: gameplay and presentation.

A brand-new design team is on the case this year. Cummings said that he wants players “to be hit in the face with football” from the moment the game boots up, so the opening visuals are much more dynamic than ever before (they also feature football-related cues, like a goal post and a scoreboard). The game’s menus have also been completely revamped in the name of simpler and more intuitive navigation; Cummings felt that menu options weren’t always where you expected them to be in years past. In addition, the play-calling screen has been overhauled; it’s now much less obtrusive, which leaves the majority of screen real estate for sweeping views of the football field itself. And instead of trite NFL trivia, pre-game loading screens now provide information on important matchups in the game ahead.

Since presentation is such an important component of delivering an authentic experience, Cummings’ mandate is persistent. EA Sports’ immortal motto (“If it’s in the game, it’s in the game”) applies more to Madden NFL 10 than to any of its predecessors; minute details like Super Bowl patches on jerseys, proper team color gloves, and quarterback hand warmers all make you feel like you’re watching a game on Sunday. The game’s senior producer, Phil Frazier, explained that every player on every team could potentially be someone’s favorite player, so attention to detail is paramount. The 7 on Ben Roethlisberger’s helmet now sits squarely on the yellow stripe instead of to the side, and at the Super Bowl, the sidelines will have the appropriate team colors.

For the first time in Madden history, all seven referees will be seen on the field (even last-gen versions, at their peak, could only handle five). Gamers had been clamoring for this forever, and now it’s here. Tiburon was toying with the idea of letting referees act as normal bodies on the field (i.e., they could be collided with), but early testers found that the refs merely got in the way. So a compromise was reached: if you run into a ref, he’ll topple over, but your path won’t be affected in any way. Along with on-field referees, the chain gang is finally back. While there are plenty of additions, Tiburon also cut away some of the excess; weapons are gone in Madden 10, and while last year’s much-ballyhooed Madden IQ system still exists, it’s not required like it was in Madden NFL 09 (and its difficulty slider tweaks are more subtle).

Of course, gameplay is what matters the most. The game’s credo this year is “Fight For Every Yard,” and Tiburon is using some tremendous new technology to make that happen. Madden 10 will see the debut of the “Pro-Tak” system, which is a physics-based procedural tackling setup. Last year’s game was limited to producing three-man gang tackles, but with Pro-Tak, up to nine men can be part of a pile. That’s not just a ball carrier and eight defenders, either — for example, offensive linemen can join in and try to push the pile forward a few inches for that vital first down. All the collisions are procedurally generated, not canned animations, and they take physics (body size, player speed at impact, etc.) into account.

The best thing about Pro-Tak is that it’s user-controlled. You’re the one who can fight ahead for another yard or two — if you’ve got someone like Brandon Jacobs on your team, that is. There’s not even a special button to engage this; it simply comes from the left analog stick. If you can move the pile, you will. Button presses do come in, however, with the all-new fumble pile system. Until now, recovering a fumble was pure dumb luck; whoever touched the ball first would pick it up. That’s obviously not how things work in the NFL, so when two or three players are near a loose ball in the game, they’ll jump on the ball, and a cut scene will begin. During it, a button will flash on-screen, and you have to mash it (as an analog for the unspeakable, do-whatever-you-have-to shenanigans that go on inside the pile) to try and grab the ball. You’ll also see a possession meter — jam on the button more if it’s not pointing your way!

Pro-Tak completely changes the game in many ways aside from what I’ve mentioned. It allows for a true pocket for the offensive line, as well as “steerable” tackles and blocks. Until now, most players have dropped back far behind the line of scrimmage, which isn’t realistic (ever hear of the three- and five-step drops?). Pro-Tak rewards smart, skilled play. It has your offensive line form an actual pocket, so quarterbacks are encouraged to play up in the pocket (like real QBs do). Defensive linemen won’t just perform endless “rip” or “swim” moves anymore; instead, they can now beat blockers realistically, and O-linemen can “steer” defenders to the ground. It all makes for a significantly more true-to-life experience.

More help for quarterbacks comes in the form of an idea so simple, it’s a wonder that it wasn’t implemented before. I don’t know about you, but I have a tough time looking for open receivers while keeping track of the pass rush, which often leads to sacks. In Madden 10, as defenders close in on you, the controller will vibrate to let you know about them — you literally “feel the pressure.” And a mere flick of the right analog stick will attempt an evade move, though its success will depend on how nimble the quarterback in question is (Big Ben will have an easier time of it than, say, Tom Brady).

On the defensive side of the ball, there’s a key addition to make the game more accessible. For gamers who want to play a Polamalu-like defense — just pick a safety and have him roam around with a nose for the ball — the game now offers a defensive assist. Holding X/A automatically keeps you close to the play, though it won’t actually make the play for you (it won’t bat down balls, and it won’t tackle). But it’s a great way to help out with coverage as a defensive back without having to think too much — you can use it to stay in position near a receiver, and then you can try to make a play on the ball yourself.

Cummings also showed off the game’s nifty animation blending. Consider this situation: a quarterback gets hit as he throws. In previous games, the tackle animation would interrupt the throw animation, so the QB would just draw his arm down while taking the sack. With this year’s blending system, a physics-based calculation takes place when a defender hits a QB in the middle of a throw. So if you grab a QB’s ankles, he’ll probably still be able to get a decent throw off. But if you whack his upper body, that ball’s going to flutter in the air, and it may well get intercepted. So now, the very real risk/reward call that NFL quarterbacks have to make is present in the game — do you take the sack, or try to make the play?

From a visual standpoint, the game is even more impressive than last year. An accurate depth-of-field filter has been put into Madden 10; you’ll notice it in replays, where zooming in on a player will blur the background and the foreground in a manner consistent with what you would expect from, well, real life. I only saw Raymond James Stadium, the site of Super Bowl XLIII, in the demo, and it was more detailed than ever before. The new DOF filter combined with full sidelines (chain gang, teammates, practicing kickers) makes long, wide-angle shots look great.

Madden NFL 10 is shaping up to be everything EA Tiburon has been promising, and they weren’t even talking about the game’s features yet (I asked about Superstar mode and online play, but was rebuffed; they’ll be showing that stuff at E3). The considerable alterations and improvements to the gameplay and presentation will go a long way to providing an accurate simulation of football, which is the ultimate goal. I’m very much looking forward to getting my hands on the game soon, but for now, I’m quite impressed already.