An early look at LEGO The Lord of the Rings showed the full Fellowship in LEGO form, with all speaking using the movie voices. You haven’t lived until you’ve experienced Gandalf’s voice coming out of a little yellow bearded toy person. LOTR fans will flip when they see and hear Frodo, Sam and the others in block form too. 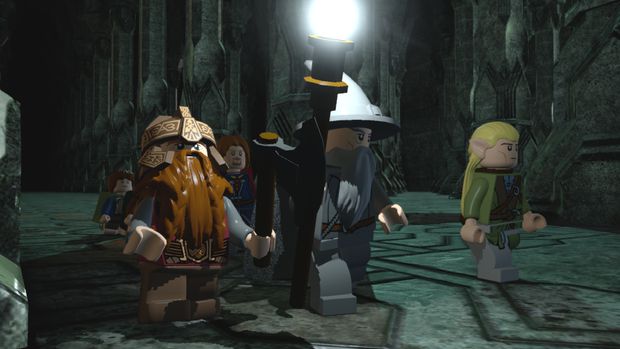 In a hands-off demo we saw the gang in a castle, where they’ve been looking for a key to be able to move on in their exploration. They were well on their way until silly Frodo fell into a water hole. As you can imagine, Gandalf was annoyed.

Frodo’s friends worked to get him out using the LEGO game mechanic that lets players build useful objects with collected blocks. In this case they needed to build a well, and Gimli was more than happy to help out by throwing hobbits into walls to find more blocks. Dwarves are handy like that.

LEGO The Lord of the Rings has the entire Fellowship traveling together, letting players take over any character (or any two with co-op) to use their particular strengths in various situations. We only saw a few in action, though. As you’d imagine, Legolas has his bow and arrow, and Gimli has his axe and crazy strength. Sam has the ability to set fire to brown LEGO, which will help in solving puzzles and uncovering new paths for exploration. 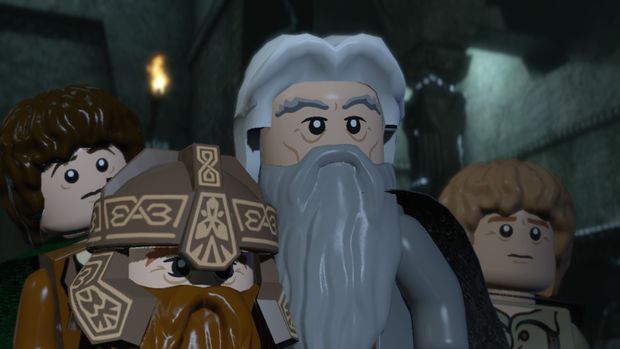 Once out and safe, Frodo hears something in the distance. Probably orcs, right? The whole gang works to block the castle interior door with objects to keep the orcs from busting it down. They did this all by torch light, which showed off the game’s slick lighting engine. The team worked hard to keep the door closed, but the orcs came in anyway.

Unfortunately, following these orcs was a huge cave troll, and he didn’t want to go down as easy as the others. Taking this sub-boss down involved some simple puzzle solving; the player needed to stand on one of may points in the stage so that the troll would be tricked into swinging at him. A quick dodge by the player left the troll anchored to this point, leaving it vulnerable to attack. Legolas took point, waiting for its swing and running down its anchored chain to its face, and then shooting it in the eyes.

LEGO The Lord of the Rings will tell the story of the full trilogy, from Fellowship of the Ring to Return of the King. And, as anyone that has played LEGO Batman can tell you, the treat here is going to be how the story will be retold with the LEGO game’s snarky sense of humor. This is one that both LOTR and LEGO fans should definitely keep an eye on.