I recently sat down with Matt Findley, president of inXile Entertainment, to play and discuss the studio’s upcoming hack-and-slash action game, Hunted: The Demon’s Forge. “Fantasy’s the roots” of the title, he said, since it’s “what got me into this business twenty years ago.” Findley and inXile love fantasy games, “but the problem with fantasy right now is [that] there’s no action games,” he explained.

That’s the void that Hunted attempts to fill — it’s a cover-based third-person action game with Gears of War’s trademark “stop-and-pop” shooting (of arrows instead of bullets, mind you) and a traditional fantasy aesthetic. Perhaps more significantly, inXile designed the game around co-op play. Its two leads, the human Caddoc and the elf E’lara — who each represent the epitome of their particular gender — are the key in making Hunted stand out. 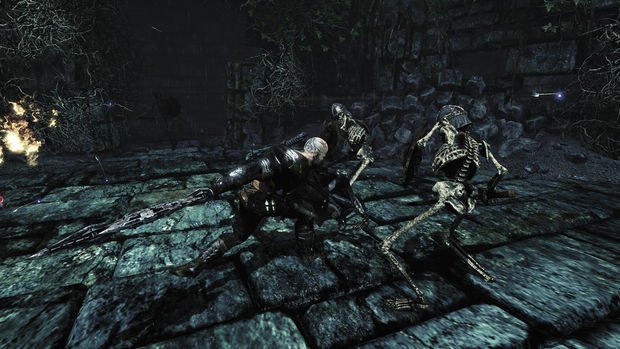 Hunted is an entirely cooperative experience: if you’re not playing with a human partner, the AI will control the character you’re not playing. The game supports split-screen and System Link play offline, in addition to online co-op. Both characters can perform melee attacks and ranged attacks, and use magic spells, but each player has a strength and a weakness. The brawny Caddoc is a manly man equipped with a sword and shield; his crossbow doesn’t do much damage at all, and he can only unlock special skills and abilities for his melee attacks. These include a shield dash and a “berserk” mode that “Hulks him out,” as Findley put it. On the other hand, E’lara — a well-endowed elven rogue — is weak when it comes to hand-to-hand combat, but her bow is not to be trifled with. Archery upgrades include the self-explanatory Arctic Arrow and Explosive Arrow.

What would a co-op game be without team attacks? With Hunted’s “Battle Charge” system, either character can use magic to compensate for the other’s weak point. For example, Caddoc can imbue E’lara’s feeble sword with lightning, temporarily giving her a strong melee attack. Enemies also have their own specific vulnerabilities, so you’ll have to figure out which attacks and spells work best against which baddies.

I played the first half hour or so of the game by myself. It begins in a flame-lit underground cave with an appropriately creepy ambiance: red candles lining the walls, cobwebs in corridors, rats scurrying across the dirt floor, and skeletons lying around. You control Caddoc, and after walking forward and pushing through an ornate wooden door, a cutscene begins. A beguiling, chesty woman in a skimpy outifit, whose skin could use some melanin — or any, really — appears in front of Caddoc, tempting him to touch something called the Death Stone with promises of “powers beyond your wildest dreams.” Upon doing so, he sees a vision of a warrior fighting a dragon — and then wakes up.

At this point, I played through a basic tutorial segment, making my way through a lush forest as Caddoc while an AI-controlled E’lara tagged along. I familiarized myself with the combat system by stabbing and firing arrows into some overgrown spiders. The cover system is serviceable but somewhat clunky — I couldn’t get in and out of cover as quickly or as easily as I wanted to — and the melee combat is simple, with your typical light and heavy attacks, but feels substantial. Pressing the right trigger brings up the ranged attack (a crossbow, in Caddoc’s case), and pressing X or Y will return to melee. I found the block animation (or lack thereof) to be a bit off-putting: unlike, say, God of War — where Kratos will automatically turn to block in the direction of an incoming attack — you can aim Caddoc’s shield whichever way you want to, and you’ll block attacks if you’re holding the left trigger, but it will actually look as if he’s getting hit from behind. 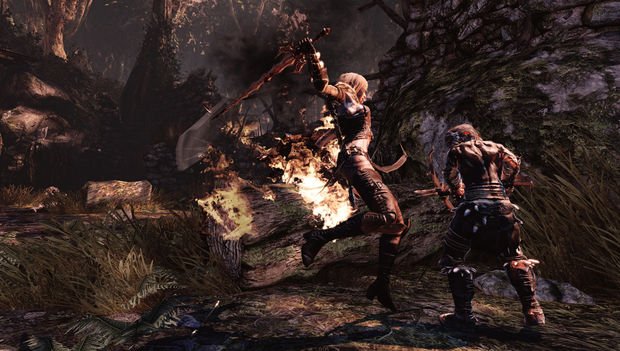 After filling up on mana in a forest pool, Caddoc notices the strange, forbidding door from his dream. He’s wary of it, but the carefree E’lara suggests pushing ahead. Hunted is bogged down by some pretty rote dark-fantasy tropes and dialogue, but its saving grace is the funny banter between its leads. No relationship between them — aside from a mutually beneficial loot-adventuring arrangement — is immediately apparent, but their interplay suggests there’s more to it than that, even if it’s not necessarily romantic.

So the two of them open the door and keep going, passing a beautiful scenic outlook over a chasm into which numerous waterfalls pour. Eventually, they come across an area full of stone pillars, where the enchanting woman from Caddoc’s dream hops out of a portal and introduces herself as Seraphine (voiced by Lucy Lawless). She asks Caddoc to touch the Death Stone that’s lying in front of them, but as a guy who looks like he’s, y’know, been through some shit, he decides against it. E’lara, however, has no such misgivings, and — against Caddoc’s cry of “no!” — places her hand upon it. Bad idea. The sky turns an ominous purple color and fills with lightning as the stones around Caddoc and E’lara begin to collapse. They’re able to sprint to safety, and Seraphine shows up again, surprised that they survived. It’s unclear whether she’s a friend or foe, but she gives you some tasks.

That segment was mostly linear, but Findley told me that things really open up; even in the early part of the game that I played, I noticed more than a few side paths — one of which led to a unique weapon. Yes, Hunted is going to satiate loot whores’ grinding desires; you can pick up weapons off of enemy corpses, and each one has attributes such as “melee +30.” Caddoc and E’lara had to work together in order to procure the rare weapon, joining forces to solve a simple puzzle. (For instance, Caddoc has the strength to move stones or sections of wall.) This aspect of Hunted means that you can expect a longer experience than the typical modern action game; according to Findley, it’s closer to twenty hours than it is to ten.

I skipped forward to a later part of the game, and was joined by a human partner for the section. I chose to play as E’lara here (checkpoints throughout the world allow you to switch freely between the two), at a point where the combat gets more strategic than mere hack-and-slash. We purchased magic spells and special skills — all of which are further upgradable through a skill tree — and assigned them to the D-pad. It’s up to you and your partner to use your powers together in smart ways during combat; one particularly effective combination was to freeze enemies with my Arctic Arrow and then have my partner, as Caddoc, smash them into chunks of ice. 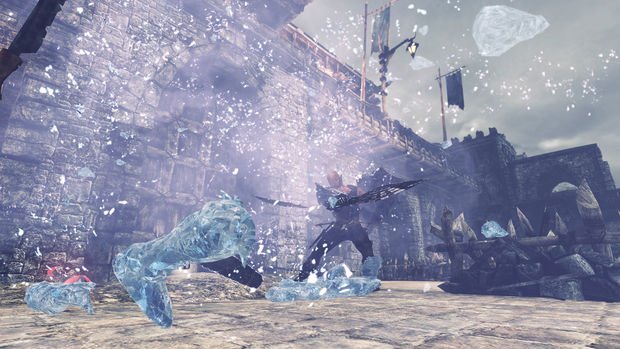 We proceeded forward into a town square overrun with orc-like enemies called Wargar, and this is where the situation became overwhelming. You can revive your partner if they go down, but you don’t have to actually make your way over to them — instead, you can merely toss a vial of revival potion toward them, as long as they’re within your line of sight. Unfortunately, Hunted doesn’t do a very good job of letting you know that your comrade is in trouble; a small red arrow does show up, but unless your buddy is screaming in your ear that he needs help, you might not even be aware that he’s down. You can crawl when you’re incapacitated, but since the game is so co-op-focused, you’re both forced to return to the previous checkpoint if either of you dies.

Once we finally made it through that area alive, the town’s mayor asked us to help retrieve his daughter. We headed into a prototypical fantasy dungeon, replete with confusing paths, traps, ambushes, and a massive talking head made of rock. The head required an “azure light” in order to let us pass, so we had to find a blue flame and then bring it back. I encountered a bug in which my arrow wouldn’t actually show up as being lit, but eventually got it to work. Thing is, I couldn’t switch to my melee at any point (the flame would go out if I did), so I needed Caddoc to protect me if things got hairy. Naturally, they did — a large spider and a tall flaming skeleton ambushed us along the way back to the talking head — and I was at least able to fire blue-flame arrows into them. We finally were able to escape the catacombs after I fired an arrow right into the stone face’s eye. We were trying to get through as quickly as possible, but it did seem that there was more to do — the game does include numerous optional side quests — in the area.

Hunted seems like an enjoyable romp, especially for fantasy fans who want a more modern twist on the classic genre. Its story doesn’t look like it will offer anything that you haven’t seen before from Dungeons & Dragons-style fiction, but I found its co-op experience to be fun (as long as you’re communicating with your partner); it has the potential to really shine.

Filed under... #Bethesda#Destructoid on assignment