When Monolith first told Warner Bros. that it wanted to make a Batman game, there were blank, confused stares all around. The publisher already had a successful Batman game with Rocksteady’s Batmam: Arkham Asylum and the follow-up, Arkham City, was already well into production.

But the developer had its own ideas, a multiplayer game set in the Batman universe, and one that would turn Gotham City on its head. The first challenge when tackling a multiplayer Batman game is obvious, and that is that everyone’s going to want to be Batman.

Monolith had the solution. Enter Gotham City Impostors, a downloadable multiplayer first-person shooter where no one is the Batman, but everyone can be a Batman.

[Note: While Warner Bros. was more than happy to let us get hands on with an early Xbox 360 version of the game, they didn’t provide a single in-game screenshot for purposes of coverage. Outside of the game logo and the concept art pictured in the header, the images contained are from another awesome game called real life.]

Even though we’d had hints of Gotham City Impostors (via domain registrations) for awhile, the game itself still comes as a bit of a shock. Distracted by the upcoming sure-to-be Game of the Year contender Batman: Arkham City, who’d have guessed it was a multiplayer first-person shooter set in the Batman universe? by the devs who brought you F.E.A.R. and No One Lives Forever, no less? Warner execs didn’t see it coming, either, and called the initial pitch one of the most “surprising” they had ever seen.

A lot of that probably had to do with some early concept art it had lugged along to that initial meeting. One we were shown displayed a group of folks dressed up in Joker-style attire. Dead center was a skinny, naked man in clown make up, mockingly pointing his middle finger at the camera. The mans crotch is blurred out, but beneath it you can vaguely make out a shock of green pubic hair, which matches his bright green afro.

While you’re not likely to see any imagery like that in the game when it ships (they’re aiming for a “T” rating), it was wild enough to win the suits over. The game was given the greenlight, and later given the seal of approval by DC Comics and the legendary Jim Lee. Lee loved the idea so much, he went back to DC and wrote up an entire storyline for Detective Comics based around Monolith’s “Impostors” concept. 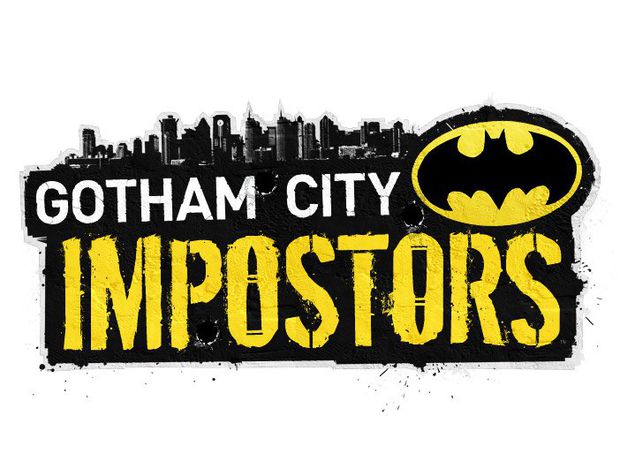 The idea is this: regular, everyday folks — bored with their decidedly average vanilla lives — have decided to take things into their own hands. On one side, you have folks dressed like Bats, personalized variations of the Gotham’s crime fighting Dark Knight. On the flip side, you have the Jokerz, mischievous citizens who’ve identified themselves more with the Clown Prince of Crime himself, The Joker.

That underlying narrative lends itself to Gotham City Impostors’ reason for existing: team versus team online multiplayer shooting. It’s also a great setup for allowing a wide range of player customization, which will allow players to carve their owner Jokerz/Bats identity online.

First you’ll identify what body type your character will use, which is not only an aesthetic choice, but one that has an affect on gameplay. We saw three unlocked — Speedy, Nimble, and Tough — with two “classified” types that unlocked through an XP-based player progression system. The “Nimble” style was chosen for our initial demo, which skins the player as a female, and allows players to move swiftly and even jump a bit higher than other physique types.

While they didn’t seem to have any affect on gameplay, other changes in physical appearance — including the type of costume you’ll don — are also available to you. As a “Bat,” for instance, you’ll be able to swap out different style cowls, shirts, gloves, and more. Imagine, if you will, a female Batman wearing a sporty jersey, a short ruffle skirt, and a tight rubber mask, accented by a pair of (functional) glider wings. That’s just the start: there appeared to be a metric ton of other visual options at your disposal. I just don’t think naked with green pubes look of the early concept art will make the final cut. 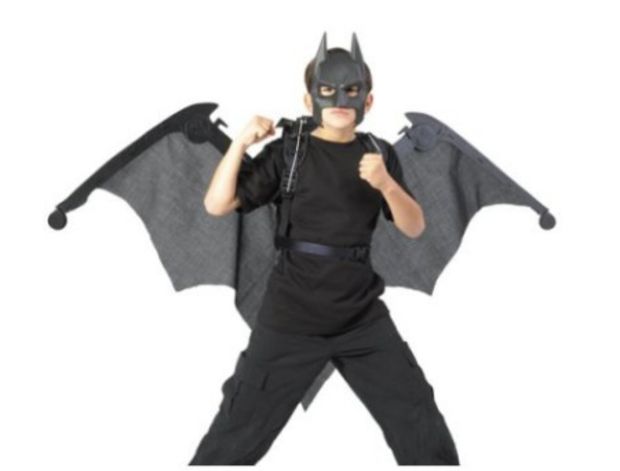 More important than your look may be your weapon loadout. This consists of a primary “ready” weapon, a backup, a support item, and gadgets. As the Impostors don’t have the same access to the resources as the “real deals,” they often have to rely on the black market or even fashion their own crude (but effective) items.

The ready weapons we saw were typical of the shooter genre, like an assault rifle Monolith is calling the “Dawn Patrol.” The “Thunder Dragon” back up weapon, on the other hand, looked more like something made in dingy basement: it’s a rocket launcher made from PVC tubing, a can of fireworks jammed into it as ammunition. Weapons can be customized even further by swapping out ammo types, and even applying your own skins. It should go without saying, but the “Thunder Dragon” looks totally bad ass clothed in the game’s “Pink Cheetah” skin.

Support items are the next way you can customize your play experience, and include things like pipe bombs, boomerangs, trap-in-a-box, and an energy drink that instantly boosts health. You won’t be able to spam these items, as they require a cool down period, but used effectively they can give a significant advantage. The “Hatchet,” a throwing axe that can drop enemies with one hit, was particularly popular in our hands-on session.

Finally, players must choose a gadget type, many of which are directly related to how they can move about the game’s maps. Players who want to play it safe can choose from a standard Batman grapple gun, which works as you’d expect. A winged Glider Rig can also be used, which allows players to glide about a map, taking advantage of vents scattered about to reach new vantage points. Rollerskates can not only give you a speed advantage, but can also be used to launch off of ramps that I saw scattered strategically around the playable stage.

Monolith showed off two games modes: a traditional team deathwatch (which was playable), and a hands-off mode called “Psychological Warfare.” In this game type, teams rush to acquire a battery that must then be returned to their respective brainwashing device. Once the battery is inserted, 30 seconds countdown before the apparatus is triggered. Once it goes off, the device sends out an opposing “propaganda” signal to the other team, driving them into an uncontrollable frenzy. At this point, players being controlled by the signal lose all use of their weapons, their attacks replaced by a wild slapping motion. If players can’t deactivate the device in a short set period of time, a point is awarded to the opposing team. 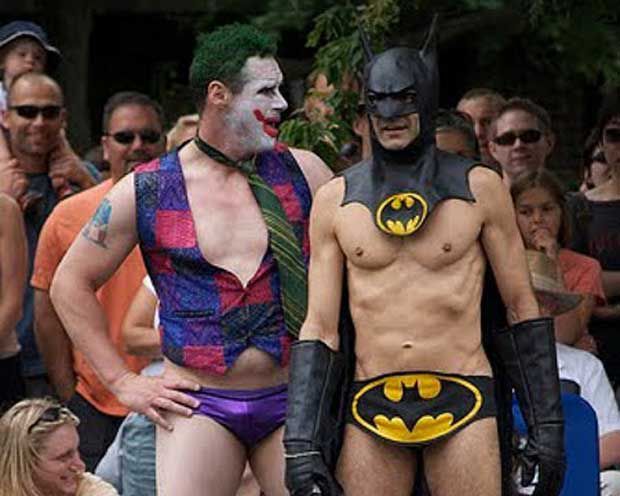 At this point, Monolith was only willing to show off one map, “Amusement Mile.” This run down carnival area sits on the outskirts of Gotham City, and was a colorful space for the Bats versus Jokerz proceedings. And while matches were eight on eight affairs, Monolith says its still working on the best balance in terms of maximum players for each team.

As with most modern multiplayer titles, you can expect Gotham City Imposters to have a player progression system where they’ll be awarded with XP as they play. As players advance, they’ll open up a number of “classified” (or previously locked) items, including body types, visual options like item skins and clothes, and more.

With a focus on fast, twitch-based multiplayer action, Gotham City Impostors is about as dissimilar to Rocksteady’s Batman games as it gets. If you’re not a fan of multiplayer shooter action, Impostors may not be your cup of tea. Despite its wild, comic book slant and curious take on Batman’s little corner of the DC Universe, it’s still very much a traditional shooter at its core.

Regardless, Monolith has proven that when it comes to the genre, it’s got the chops to deliver. If it’s price right for a downloadable title, Gotham City Impostors could be an interesting alternative to the traditional military shooters ready to flood the market this fall.