You might not have heard of de Blob. It’s one of those secretly successful Wii third-party games that a lot of people overlooked.

Based on a project by college students studying game design, de Blob pretty much came out of nowhere. The game combines traditional 3D platforming with the “roll over everything in sight” mentality of the Katamari series, and the “graffiti as an act of adventure and expression” philosophy of the Jet Grind Radio series. Despite a minimal marketing budget, the game went on to sell over 900,000 copies, which is pretty fantastic for a new IP that was produced for a fraction of the cost of most million-selling titles.

That success has led to a sequel. de Blob 2 will be hitting the DS, Wii, Xbox 360, and PlayStation 3 (with PlayStation Move support) early next year. I had the chance to check the game out a few days ago. Here are my impressions. 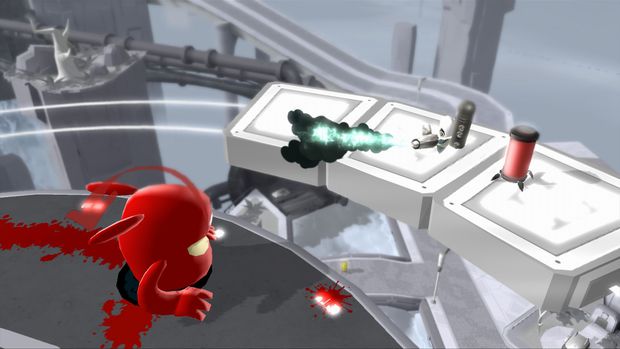 Nintendo has had a major influence on their design philosophy. According to de Blob 2 designer Nick Hagger: “Nintendo is the best at creating games that teach new lessons by rewarding the player for exploring and trying new things. We’re working under that mindset to make de Blob 2 a game that sucks players in and keeps them entranced.”

There is at least one thing that de Blob 2 has over current home console games from Nintendo; on the 360 and the PS3, the game is in HD. As someone who thought the first de Blob looked just fine in standard definition, I wasn’t particularly excited to see the game in HD. After seeing it in motion on the 360, I felt a little differently about that. There is no denying that the added range of colors amounts to a more stimulating experience.

That said, I was told the most eye-popping way to play de Blob was stil yet to be shown. The game will be compatible with 3D TVs, which got the developers so excited that they started shouting at me. I tried to harness that excitement into an exclusive, as I asked if they were equally excited about putting the game on the 3DS as well; that killed the mood fast. All I got out of them was the standard smile/awkward pause and “We have nothing to comment on at this time” statement that every secret 3DS developer gives me when they can’t talk about their game yet. 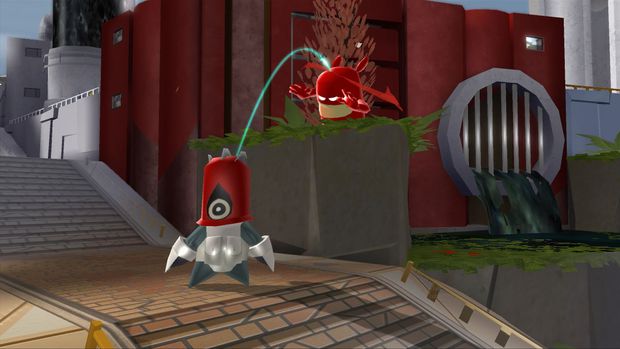 With all of this focus on 3D and HD, I got a little worried that the Wii version would suffer in comparison. I was told not to worry; that the Wii version “looks amazing,” and is everything that the PS3/360 versions are (minus the HD, of course). The de Blob 2 team took care to listen to fan criticism of the original games, particularly the controls. Jump is now mapped to the “A” button instead of a flick of the Wii remote. That goes for the PS Move controls as well.

The DS version isn’t getting left out, either. Like with Sonic Colors, de Blob 2 on the DS is a 2D platformer. That’s not just because the DS’s smaller processor and screens are more suited to flatter gameplay. It’s also because the developers of the game just love 2D platformers. They’ve also added a lot of 2D platforming elements to de Blob 2 on the Wii/PS3/360. The 2D/3D platforming mix of Super Mario Galaxy was name dropped several times as an influence. 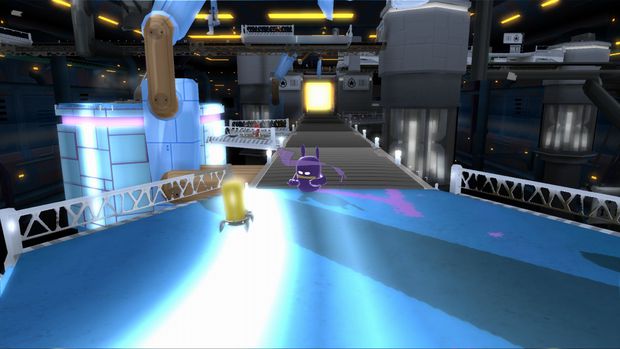 In playing the game, I could definitely see the Mario Galaxy 2 connection, particularly with the two-player co-op. At any time, a second player could pick up a control pad and take control of Pinky, Blob’s robot sidekick. She can indirectly help Blob by stunning enemies and grabbing paint for Blob, or she can mess with him a bit and paint him an inappropriate color. While this brand of co-op felt a little tacked on in Galaxy 1 and 2, it feels more organic in this context, with more to do and more reason to do it.

Mario Galaxy isn’t the the only platformer that de Blob 2 reminds me of. The main game felt largely like the first de Blob, with a great emphasis on vertical platforming and environmental diversity. Like in the first game, you’ll spend a lot of time in the city, though everything in the world of de Blob 2 feels bigger. Climbing to the top of a skyscraper and leaping all the way down evoked a definitive Jumping Flash flashback. There’s also a new rolling attack that felt a lot like Sonic’s homing attack from Sonic Colors, and a “magnet ball” power-up was highly reminiscent of the “iron boots magnet stuff” from Twilight Princess. 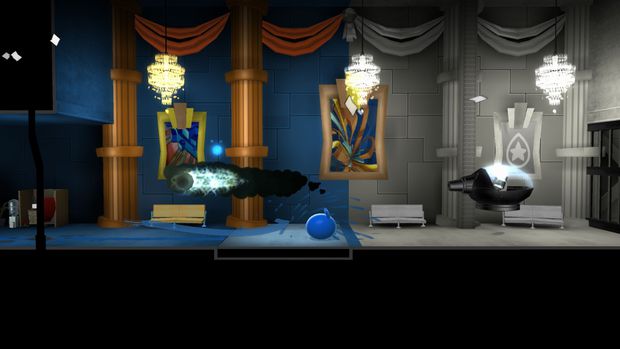 The Mario Galaxy 2 vibe came back hard in the 2D sections. From the brief time I had with the game, that’s where the real creative level design jumped out at me. The 3D parts were a lot of fun, but in more of the sandbox/playground sort of way. In 2D, de Blob 2 becomes an obstacle course in the style that most great platformers adhere to. There were a lot of little 2D sections littered thoughtout the first level, but the stage ended inside of a giant powerplant where I had to reverse gravity to ride on top of a ceiling, dodge open flames, and take out multiple enemies.

That’s one of the areas that the developer of de Blob really want to max out on. They’re working to fill the game with tons of enemies and bosses, each of which will use the game’s patented “paint your foes death” gameplay system that makes de Blob special. One of their focuses is to make the game harder this time around, which will make things more exciting, and also encourage greater exploration. 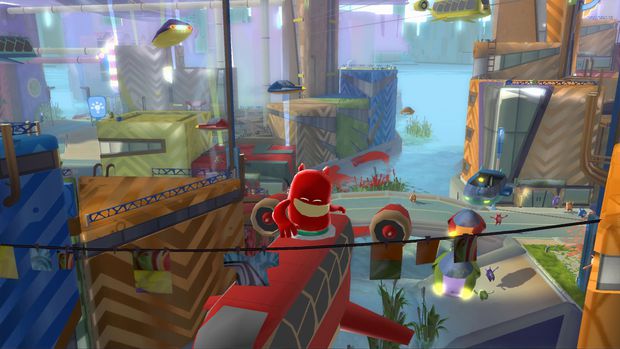 The game has a currency system which will let players who want to spend more time playing the game have an easier time getting through it. You can goof through the game at your leisure; exploring, painting buildings, and doing side missions at your own pace, which will end up netting you more “inspiration points.” There points can be used to boost your stats in a variety of ways. Play through the game as fast as you can, and things will be a lot tougher, which will appeal to gamers looking for a speedy challenge. More casually paced players will conversely be rewarded for taking their time and doing as they please.

Though the game is definitely made to appeal to both long-time videogame fans and less-avid players alike, there is definitely something more here for those with anti-authoritarian tendencies. The game’s story is cute and subtle, but definitely pointed. Comrade Black, the villain from the first game, has become a religious leader. All who follow Black’s doctrine are encased in suits that limit them from experiencing color. It’s sounds depressing, but it just comes off as cute when the little fanatics charge Blob and attempt to convert him to the cult of Black. There is a lot more to the story than that, with the concept of day jobs and the military getting a similarly subtle skewering. 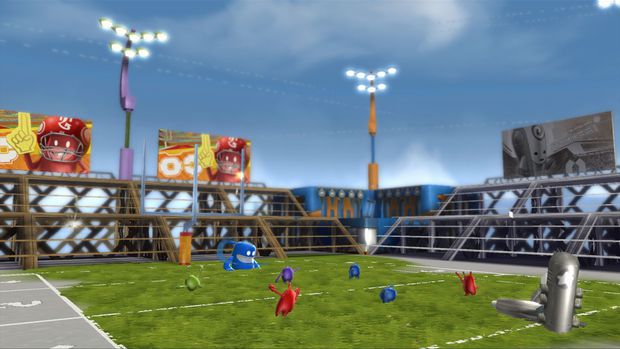 Overall, everything about de Blob 2 feels a lot fuller and more extensive. There are plenty of never-before-seen things to see and do. It may sound trite, but being able to kick around new NPC animals (like little alien cows, squirrels, and dogs), run down a football field as it explodes with color, and switch between multiple types of gameplay puts de Blob in a whole other class of game.