Construction on the bridge connecting downtown Paradise City to Big Surf Island is finally complete! Well, the bridge still has some construction going on but that’s not going to stop anyone from heading into the island. Plus, all of the remaining construction makes for some pretty sweet jumps!

I got to visit Big Surf Island when I tried out the Cops and Robbers DLC a little while ago and the new island is a great addition to the Burnout Paradise experience. It takes everything that’s great about Paradise City and brings it all together into one place.

Fly on over the jump to find out more about Big Surf Island. 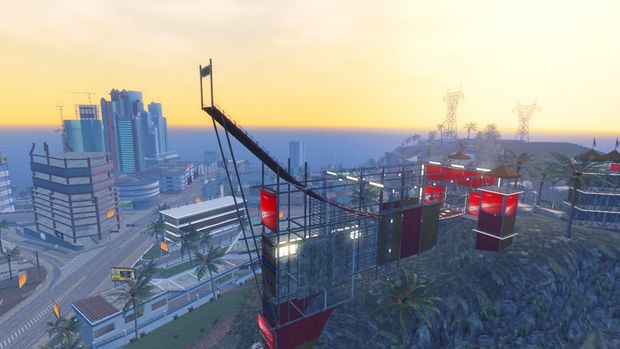 Once you’ve downloaded Big Surf Island, you won’t just be magically dropped onto the island. The only way in or out of Big Surf Island is through the bridge connecting the main land to the island. Everything is bigger, better and faster on Big Surf and the bridge will immediately gives players an example of what to expect for the rest of the island as there are several jumps players can take on the bridge and one of the game’s biggest jumps can be taken when leaving the island.

Criterion has taken the best of what people love about Burnout Paradise and brought it all into this island. The island, by the way, is a little bigger than all of downtown Paradise City. There are a bunch of tall skyscrapers that players can get to the top of and do at least eight barrels rolls before hitting the ground.

Nine new cars come with the Big Surf Island DLC and one of the cars is made available to players right from the start. The first new car is a dune buggy called the Carson Dust Storm. It’s very light, has fast acceleration, is easy to handle and is great at performing stunts. The big flaw with the car though, is that it’s a lot easier to wreck compared to other cars as the wheels at the front are completely exposed. You’ll be losing your tires/axles a lot with the Dust Storm. 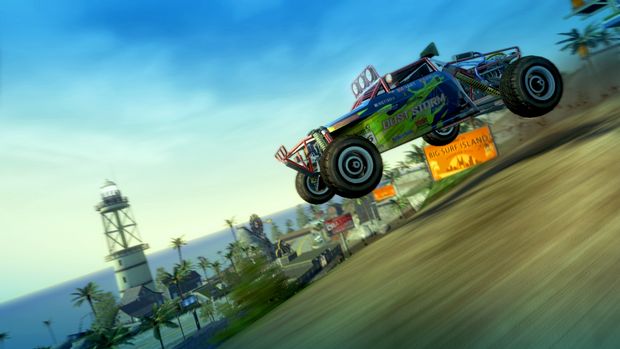 I was able to unlock a second car in my play through, which looked exactly like the Dust Storm except it had more weight to it in comparison. The increase in weight affected the acceleration speed but it still handled pretty nicely. Still, the wheels were exposed like the Dust Storm and it could get totaled easily.

As for the collectibles, you’ll have 45 billboards, 75 smashes, 15 mega jumps, 10 free burn challenges and 15 events. Some of the events are designed to take players around the island while others will see players leaving the island, going around the mainland and then returning back to Big Surf.

All in all, Big Surf Island has a really different feel to it. It’s heavily focused on the stunt aspect and for people that like to get a lot of air time. I was cautious about buying the Cops and Robbers in my impressions for that DLC, but the Big Surf Island DLC is definitely worth getting. Criterion has once again done a bang up job with their continued support of Burnout Paradise.