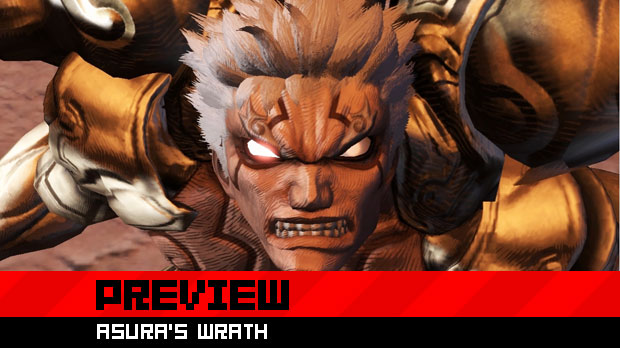 Taking inspiration from Asian mythology and the broad world of science fiction, CyberConnect 2’s Asura’s Wrath doesn’t sit comfortably in either of those worlds. It draws from themes and aesthetics of mythology, for sure. And yeah, what looks like a spaceship will drop enemies into a skirmish.

But whatever the hell is happening in Asura’s Wrath is neither grounded in mythology or like any science fiction I’ve ever seen. It’s over-the-top combat and outlandish world seems plucked out of the overactive imagination of a child overdosed on anime. In short, it’s “crazy” taken to another level.

And that’s exactly how CyberConnect 2 likes it. 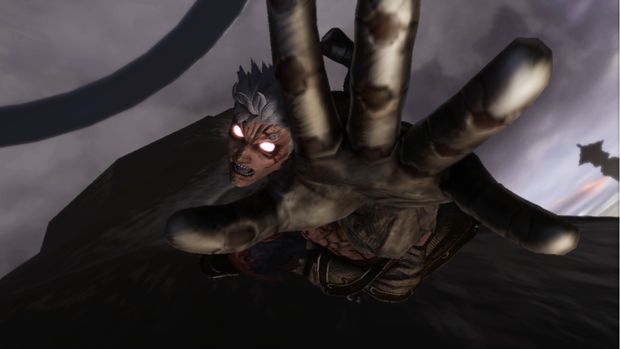 From what we were shown at Captivate, it’s hard to discern just what Asura’s Wrath is about. Players control Asura whose daughter has been (for some reason) abducted by an assembly of some very powerful demigods. Asura, like any good father would be, is not happy with the situation. In fact, he’s pretty pissed off, and he’ll do whatever it takes to get the fruit of his loins back, even if that means battling demigods that are quite literally larger than planets.

That’s exactly what he has to do in the gameplay demo we saw, one that you might be familiar with if you’ve seen the trailer that made its debut at Tokyo Game Show last year. Asura is battles a massive being named Wyzen of the Seven Deities. Wyzen looks down from above, mocking with laughter the tiny warrior who looks like no more than a speck of dust in comparison.

The battle begins with little provocation (outside of the whole “kidnapped daughter” thing, of course). The blubbery demigod smashes his hand down towards the earth, tossing Asura backwards. Asura is prepared — he flips through the air, but lands on his feet like an agile feline, the force sliding him backwards and kicking up dirt. The action begins on rails, the game’s producer on the controls, aiming towards the giant enemy in the distance with a large, orange reticle. 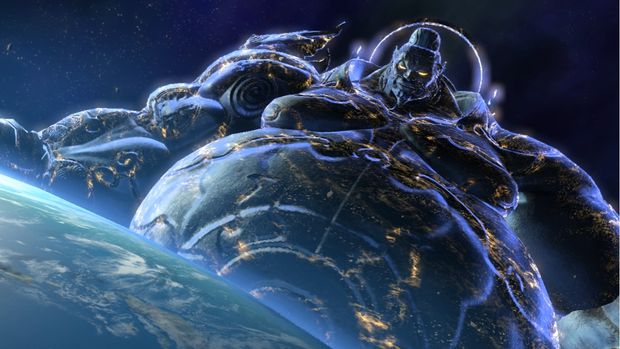 The ranged attacks prove to do little to the giant deity, so Asura leaps forward in his direction. What we see next is almost all based in quicktime events — Asura dodges missiles and uses flying pieces of debris as “steps” to get above the demigod. Once in position, a massive attack is built up by tapping a button, and is finalized by quickly pulling a trigger as directed by on-screen prompts. The attack, a massive blast, barely has an effect on the mighty god. His answer? He hops up into the air, slamming down Asura before pummeling him repeatedly into the ground with his mountainous fists. By “into” the ground, I mean that literally — Asura is smashed down with such force that he’s become one with the earth.

At this point, Asura is down, but not out. Quickly tapping a button brings Asura to full power, his rage increasing, and finally he gathers enough strength to push his attacker’s fist backwards. He leaps from the crater in the ground to reveal his most powerful form, which includes six arms, powered by his anger.

This back and forth goes on for awhile, full up mostly with quicktime events that trigger some mind-blowingly over-the-top action. The battle culminates in the scene from the trailer: Wyzen pushes a single, burning finger through the atmosphere in an attempt to stamp out Asura. Asura pushes back (more button tapping directions are shown on screen), and delivers a flurry of punches that reverberates through Wyzen’s entire body. He soon bursts into flames, lighting up the sky brighter than the sun, and the demo comes to a close. 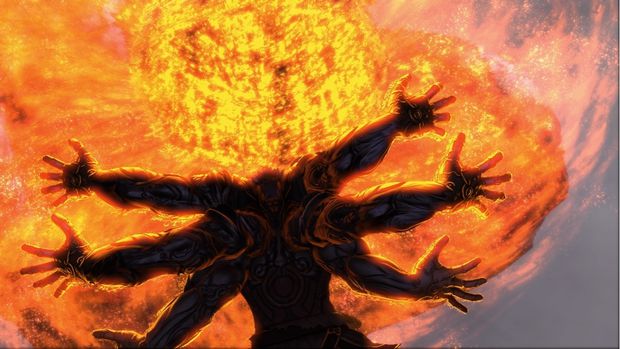 CyberConnect 2 says that this particular boss battle is only a taste of what to expect from Asura’s Wrath. It’s also one of the game’s earlier battles, and we can expect bigger, and even crazier confrontations as the game progresses. And while it was heavy on the quicktime events and the onrails shooting, that’s not necessarily indicative of the whole of Asura’s Wrath’s gameplay.

There will be parts of the game that will be full-on third-person action; we were shown some pre-recorded video of that third-person fighting in action, and it certainly looks every bit as over-the-top as the battle I described, but on a much smaller scale. CyberConnect 2 is even hinting at adventure game style elements, while being very clear that their goal is to keep the gameplay fresh start to finish.

Asura’s Wrath certainly looks every bit as wonderfully extreme and loony as I think CyberConnect 2 wants it to be. Whether it’ll have to gameplay chops to back it up is the question. Crazy is great and all, but if the game relies too heavily on quicktime events without the “real” action to back it up, that could be an issue. We’ll know more at E3, when Capcom says it’ll have a playable build of Asura’s Wrath at the show.