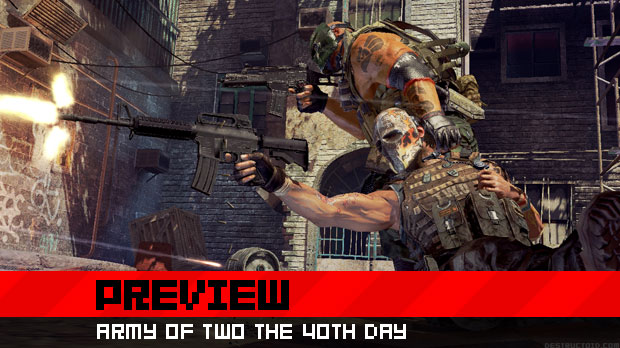 The original Army of Two was a very successful game. I mean, two million copies sold is nothing to sneeze at. However, it left a lot of people with an odd taste in their mouths. From the ridiculous fist-bumping and tampon-stuffed bullet wounds, to the not-quite-there co-op experience, and the eye-raising last-minute three-month delay, Army of Two was a flawed game, to be sure. That’s not the best impression the new studio, EA Montreal, wanted to make.

So when I got a hands-off demo of a very early build of Army of Two: The 40th Day, the very first thing Alex Hutchinson and Reid Schneider, Creative Director and Executive Producer, respectively, wanted me to know is that this is a very different game than its prequel.

These two are adamant that they’ve taken the criticism to heart. The gameplay is going to be streamlined, the “bromance” tone is being reworked, and I’ve been promised this is the game that will throw the Army of Two franchise into AAA recognition. 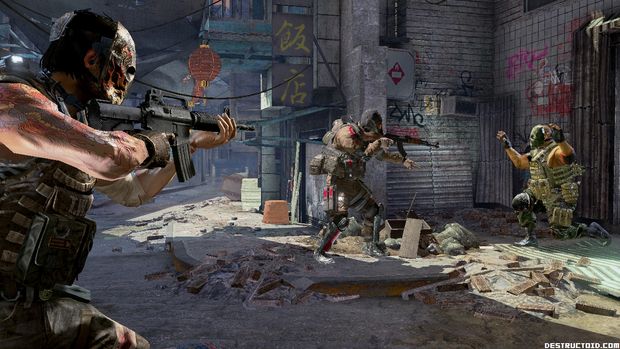 Right away, Alex and Reid really want me to know that Army of Two: The 40th Day is going to be made a little differently than the first game. Alex himself has just come from Maxis, fresh off of Spore, and they’ve brought on developers from all over the place, such as Ubisoft Montreal and Criterion, to work on the title. With a complete understanding of all the platforms they are working with (looking at you, PlayStation 3), and a complete set of assets, Army of Two: The 40th Day is, for them, going to be as streamlined and polished as possible.

So what has changed with this game? Well, the team is really trying to make the game much more “fluid”; the goal is to make our bosom buddies, Rios and Salem, transition a little more evenly between all of the things that they can do. This is most apparent in how you scan enemies, hostages, and your partner, which brings up a playbook. Say you scan some guard down the alley in front of you. The game will list options and commands for dealing with him, and coupled with the D-pad command system, you can make sure your AI-controlled partner does what you want.

The scanning-system works even better in co-op. At one point in the demo, Salem and Rios become separated, but in a room across a rooftop, a hostage is being held at gunpoint by two guards. Salem can see both, but Rios has a wooden shutter in the way. So the Salem player brings up the playbook, and marks the guards pink and the hostage green. Now Rios can see all three, and with a quick countdown, both snipe the guards. Salem has a true line of sight, and Rios just sends a bullet right through the shutter (bullets now go through wooden panels and people, among other things).

Aggro is also back, but it’s been updated to be more realistic. Obviously, shooting a stream of bullets at enemies is going to attract their attention, but now, passive actions will gain aggro. For example, Rios could walk up to some enemies with his hands up. All the aggro is going to turn to him, giving Salem a chance to snipe a couple enemies while they are distracted.

Graphically, the game really holds promise. Shanghai, the location of Army of Two: The 40th Day, is positively supersaturated with colors and motions, with little bits of dust, paper and particles floating around. Little bits of motion, like fans and smoke — while far from original ways of making things seem realistic — keep the city feeling alive and busy. 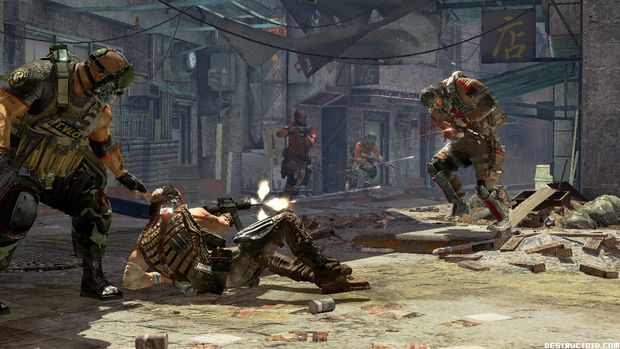 Rios and Salem themselves look great too. They are still burly guys with insane facemasks and tattoos that would make a spring-breaking co-ed proud, but their motions and personality also shine through. Alex pointed out some neat bits of tech being applied to them: when they stand on stairs or little mounds, their feet will stand accordingly with their height differences. It’s something hardly noticeable, but pretty cool when pointed out.

Also, whenever these guys are just standing around in a safe area, up go the masks. As somebody who didn’t get very far in the original game, seeing the faces of our heroes without any fanfare is surprising, but I was told it’s all part of a way to make the guys a little more likable.

What’s more noticeable than Rios or Salem is the disaster elements of the game. Army of Two: The 40th Day takes place in the middle of all sorts of military attacks, and Rios and Salem are initially looking to make it out of the city alive. And look out they will. At one point in the demo, the pair becomes separated on a rooftop. Meanwhile, the adjacent building blows completely to hell, and fighter jets start buzzing all over the place, shooting other buildings left and right before sending a rocket right at you. If Salem doesn’t haul ass, he’s toast. It’s a pretty startling and in-your-face, that’s for sure. Reid pointed out that Cloverfield is a primary inspiration for many of the story and gameplay elements of Army of Two: The 40th Day. So when stuff goes down, it goes down in a big way, and you’ll be right in the middle of it.

Now, while the buddies are going to trying to simply survive Shanghai, they also have the opportunity to gain some cash along the way. Occasionally, they will receive a call to make a kill, and then a bartering system will pop up. It’s kinda like the bartering system in Freshly-Picked Tingle’s Rosy Rupeeland, where you have to find a balance between asking for to much money or not enough. Ask for too much, and they’ll pass on you. Ask for too little (or nothing) and they’ll take you up on your offer, but comment on your bloodthirsty nature. 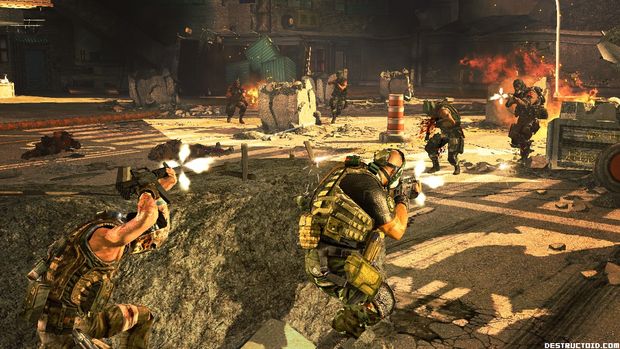 However, once the hit has been established, if you don’t want to make the kill, you don’t have to. It’s not exactly Fable, but there is a good/bad distinction here. You can be a royal bag of douche and run right into a group of enemies, shoot right through their hostages you could be saving, and follow it all up with a hearty round of fist-bumping and buddy-lovin’. Classy. Or, conversely, you can smartly take out the leader of some baddies, save the hostages, realize that the guy you were told to kill is a defenseless man and let him live, and remain an upstanding hero of Shanghai.

Little details have been changed, too. Reticule speeds are boosted and enemy kills are punchier, for example. Gone are multiple uses for one button, and the characters will do more stuff automatically. Instead of hitting “A” to go into cover, you’ll automatically go into cover or when you are running and an object is in your way, your dude will just vault right on over.

While I didn’t see any multiplayer, other than the co-op, I was promised that they have a lot coming down the line — specifically, E3 — so keep an eye out for that.

Ultimately, I came away very impressed with what EA Montreal is trying to do with their sequel. They’ve acknowledged serious problems with their franchise, and are working hard to make the game critics would want to play. It’s still early, but Army of Two: The 40th Day is certainly a game holding just a lot of promise, and if EA Montreal can follow through and make a complete, polished game, Army of Two: The 40th Day should be a game well worth some attention.