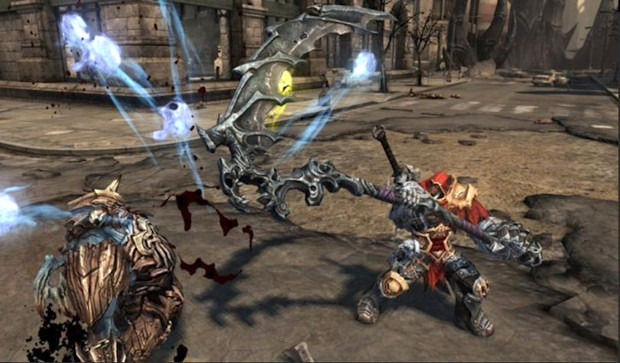 THQ’s Darksiders is hitting January 5, 2010, after what has felt like ten thousand years of development, and GameStop has revealed yet another of its exclusive pre-order incentives. Reserving the game through GameStop not only nets you an exclusive in-game weapon, but a 100-page book that features all sorts of spiffy stuff.

Titled Guide to the Underworld, the book contains a prequel comic by Darksiders writer Joe Madureira, concept art, a fold-out poster and a weapons guide. The in-game content takes the form of The Harvester, a giant bony scythe that looks to be twice the size of the game’s protagonist. Considering he looks like he’s been taking steroids since he was five years old, it’s safe to say that The Harvester is pretty bloody big.

Darksiders looks like my kind of game, in that it’s unapologetically dumb and violent. Just my sort of thing, and I’m looking forward to finally playing it.