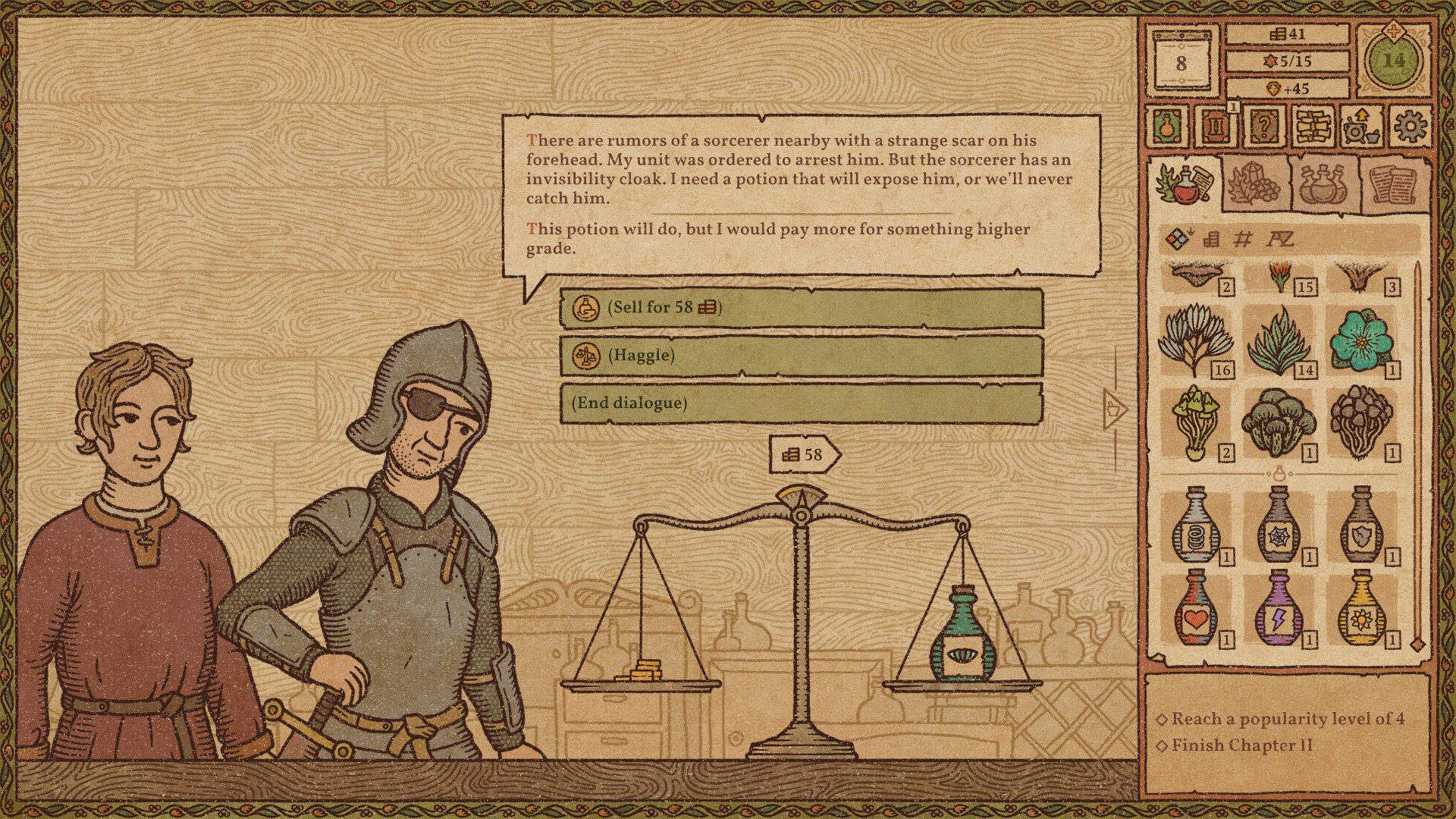 I didn’t expect to like the potion-crafting mechanic this much, but it’s fun to plot out

After seeing it on the Steam top-sellers list today, I only intended to dabble in Potion Craft: Alchemist Simulator, a newly-released game about creating potions for fun and profit from niceplay games and TinyBuild. Welp, 90 minutes later, that sure was naive.

I’m not sure about your history with browser-based games in the Flash era, but it was a time when I’d take a chance on unassuming games and wind up playing obsessively until I’d seen and done everything. Potion Craft hit me in a similar way — it has a simple but very effective illustrated style and a laid-back “friendly shopkeep” vibe that sucked me right in. And, I’m surprised to say, the potion-crafting mechanic is pretty fun to figure out.

With an up-and-coming shop, every day you’ll pluck plants from your garden, combine them in a ton of potential different ways to concoct potions as efficiently as possible, and sell them to meet customers’ requests, some of which are hazy at best. There’s some light XP-based progression unlocks (e.g., to improve your haggling or trading prowess), and some bigger goals like an Alchemy Machine to work toward, but that’s the gist.

The mechanics of Potion Craft are easy enough to grasp — this is a mouse-based game where you physically drag ingredients, mash ’em up, plop them into a cauldron, and heat up the mix, rinse and repeat. The trickier part is making the most of your harvested (and purchased) ingredients each day; figuring out the optimal use of what you’ve got and what you ideally need to deliver. If you can keep every would-be customer happy, you’ll have a great reputation. But if you try and hand them the wrong type of potion, or you just don’t have the ingredients you need that day and you have to refuse them, they’ll be grouchy. 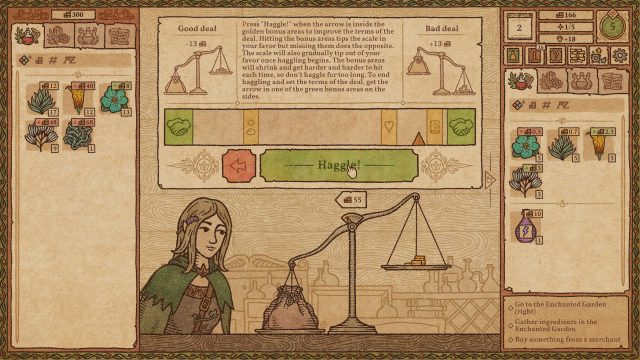 The haggling mini-game is the most “active” part of Potion Craft: Alchemist Simulator.

About those potions: instead of mindlessly grabbing a bit of this and a bit of that to make a particular blend the same way every single time, Potion Craft allows for — and eventually demands — more creativity. When you’re brewing, you’ll see a map with some good icons (like XP-granting books) and some bad icons (like piles of skulls and bones).

Each ingredient has its own pre-determined “path” it will form on the alchemic map, and by strategically combining ingredients, one after the other, you’ll be able to “build” a route that lets you snake your way around to avoid the potion-ruining spots and ultimately land on a final marker that corresponds to a potion type. While that’s a pretty wordy way of breaking it down (honestly, consult the trailer), in practice, it’s easy. There’s depth, though. 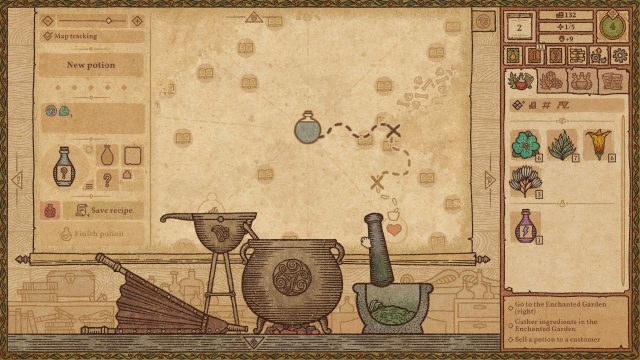 X marks the spot. In this example, if I get to the heart marker, I’ll end up with an oft-requested healing potion.

What’s interesting is that you have a lot of control over how these “routes” are built on the map — you can brute force it with a bunch of repetitive ingredients that cover little ground but aren’t zany and hard to plot out, you can use the raw ingredient or crush it to alter the length of the trail, and you can add a bit of water to your cauldron to nudge your position on the map back toward the starting point. It’s a pretty novel mechanic for a crafting game, and combined with the wider shopkeeper sim progression, it’s a fun blend.

Once you’ve created a potion, you can save the recipe, at which point you no longer need to manually assemble it again (assuming you have the exact same ingredients). 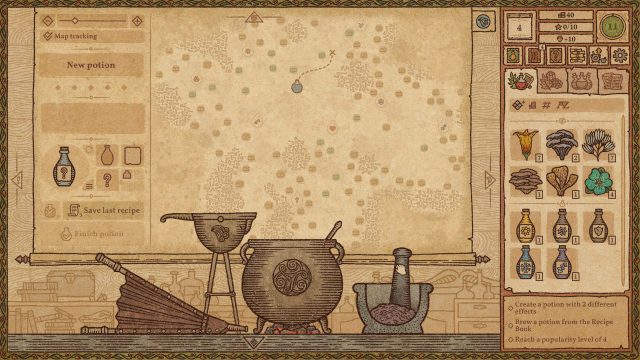 If you line up your potion exactly right, you’ll end up with a higher-tier result.

After my 90-minute session, I ranked up a few times by consistently selling the right potions without turning too many folks away, and I checked off all of the goals in the first two chapters of the Alchemist’s Path book, so I made a good dent. At the same time, the rate at which I’m progressing has slowed significantly. The long game — the big-picture strategy — is still eluding me. Operating my shop in a sustainable way, without playing so fast and loose that I run the risk of eroding my alchemist’s reputation, will be tough.

Now I know what you’re thinking: “Early Access? Let’s just save this for a rainy day.”

I get that, and I feel the same way about the majority of work-in-progress games, but everything here is polished up, and I think there’s enough content already to warrant not waiting. It’s a satisfying loop, even if there are some missing features (certain buttons have a “still in early access” caveat) and the options (including controls) are sparse.

Speaking of which, I really dig this visual breakdown of what’s next for the game: 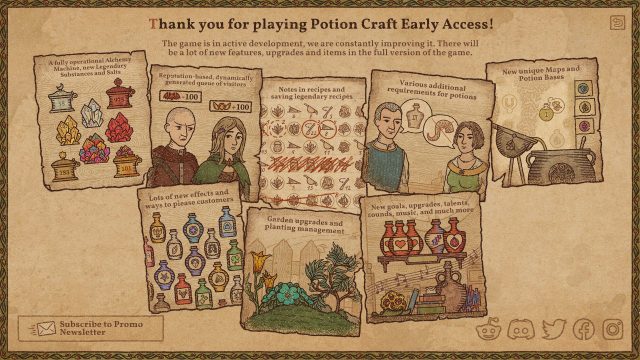 Some of the longer-term hooks aren’t finalized yet. I’m most interested in the new planting elements.

And more context about future updates from the developer:

“In the current version, the player is already able to interact with the Alchemy Machine, which will be the main tool to progress towards creating a Philosopher’s Stone. We are going to introduce more potion effects, recipes, ingredients, and potion bases. The process of running the potion shop will also expand, as players will be able to upgrade their garden, work on their reputation and develop their alchemist talents. To make sure making potions doesn’t become a routine, certain customers will request potions with special conditions. We also have plans for numerous quality of life improvements, for which we would need a lot of player feedback.”

If you’re intrigued, Potion Craft: Alchemist Simulator is on Steam for $13.49 during launch week, so you’re better off buying now, or strapping in for a long wait for eventual sales.

I came in with little to no expectations — I had heard of this game once before, likely from a showcase, but never dug into it — and I’ve already become a fan. It’s a gem!

[This impressions piece is based on a Steam Early Access build of the game provided by the publisher.]