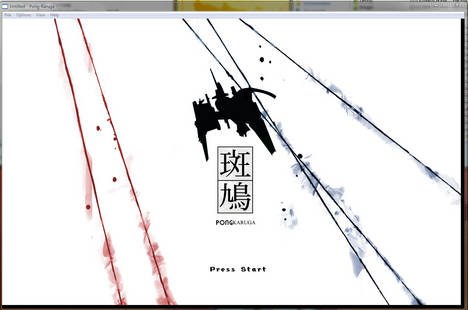 Dtoider GoS-CPT-Stewart had to create a game for a school project at his VideoGame Programming class over in Full Sail. The project tasked students to make a game like Pong, have AI and allow players to save their game. GoS-CPT could have just made a simple Pong clone, but instead, he went above and beyond the requirements of the project.

So he created Pong-Karuga, a game that still plays like Pong but has Ikaruga elements thrown into the mix. Players control a paddle that can change polarities at will. The ball can also change polarity by either hitting one of five different ships in the middle of the field or at random. The paddle must be the same polarity the ball is, otherwise the player will lose a life if the polarities don’t match when they connect. Players can miss the ball without dying, but if a ball is missed, the opposing player will earn the energy that is used for the charged shot.

When a player has earned enough energy, they can launch the ball as a charged shot. The ball will shoot out much faster than normal and as a random polarity. If the opposing player misses the ball, they will lose a life.

It’s a very simple game but pretty addictive. Pong-Karuga supports the Xbox 360 controller and has two-player local play as well. Download the game here, and if you like it, leave a comment bugging GoS-CPT to make a online flash version! Be sure to check out GoS’s dev diary on the project too.