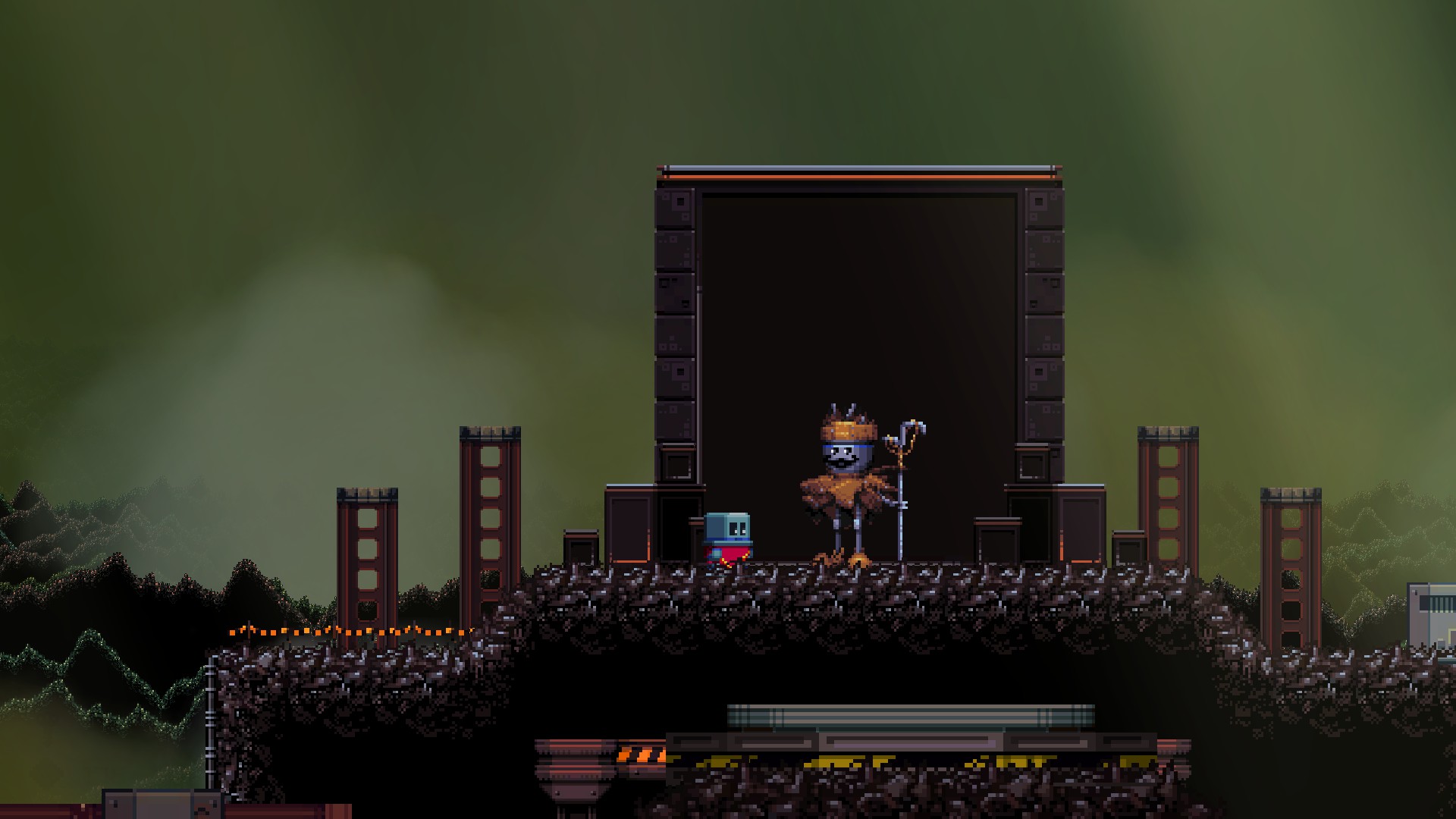 Last year, we got a sneak peek at a rather peculiar puzzle-platformer named Poncho. Launching on Kickstarter and debuting at EGX for attendees, it showed a lot of promise in exploring the earth after humans went extinct. Unfortunately, crowdfunding didn’t take off for this quirky title, but the folks at Rising Star Games stepped up and announced plans to publish it for release.

Just a month before its debut, the folks at Rising Star Games gave Destructoid access to an early build of Poncho, and it was quite evident that there’s more going on with this seemingly humble platformer than one might think. With a ruined earth to explore inhabited by robots trying to find their rightful place, Poncho is a clever take on the classic platformer, and features some fiendishly difficult and perspective-warping challenges to tackle.

After the apocalypse, humanity has been wiped out by an unknown scourge, and all that is left are machines. With mother nature having retaken the earth, the machines developed their own society and culture in the ruins of the old world. But one day, a poncho-wearing robot longs to discover his origins, and seeks out his creator. Using perspective-warping abilities and his own platforming skills, the resourceful little robot will travel through the landscape and encounter other machines trying to find purpose in the new world. Over the course of his adventure, he’ll not only discover the meaning his own creation, but also the truth behind mankind’s destruction.

In recent years, retro-throwback games such as Fez have become common. What these titles share is an increased focus on subversion and playing with genre conventions, all the while crafting a compelling story that goes beyond what many would expect from the genre they’re paying homage to. Poncho is no different. With the ability to travel between different planes of the level — from the foreground, background, and middleground — the poncho-wearing robot will have to tackle challenging puzzles and action set-pieces. The developers cite classic platformers such as Super Mario World and Sonic the Hedgehog, which had richly detailed backgrounds, as inspiration.

I was surprised by how quickly Poncho ramped in difficulty. Initially, it’s a very atmospheric game that focuses on storytelling, but once you’re let loose into the various stages, things take quite a turn. While there are no enemies or bosses to battle, the challenges come from figuring out how to navigate the multi-layered levels with the perspectives-jumping abilities. With platforms, switches, and other obstacles that call for quick jumps between the different areas of the stages, there’s tricky twitch-based gameplay to the platforming and some genuine three-dimensional thinking to the puzzles. It’s trippy while still playing on the 2D plane.

With its release approaching, I got in some quality time from the current build of the game. As you acquire new abilities and skills from schematics, you’ll be able to travel back to past stages and explore new areas. These abilities, such as the robot stomp, open a number of new avenues of exploration. This mechanic did a lot to make me understand the true scope of Poncho. It’s very much a throwback platformer with modern puzzle gameplay dynamics. There were several moments where I felt I was stuck, but once I figured things out, I was left immensely satisfied.

If you’re itching for a puzzle-platformer that plays with the genre’s tropes and conventions, then keep an eye out for this little title. While on the surface it looks like a rather humble platforming jaunt through a post-apocylyptic world filled with robots, Poncho quickly goes into mindfuck territory, and it’ll raise questions you’ll be dying to get answers to.