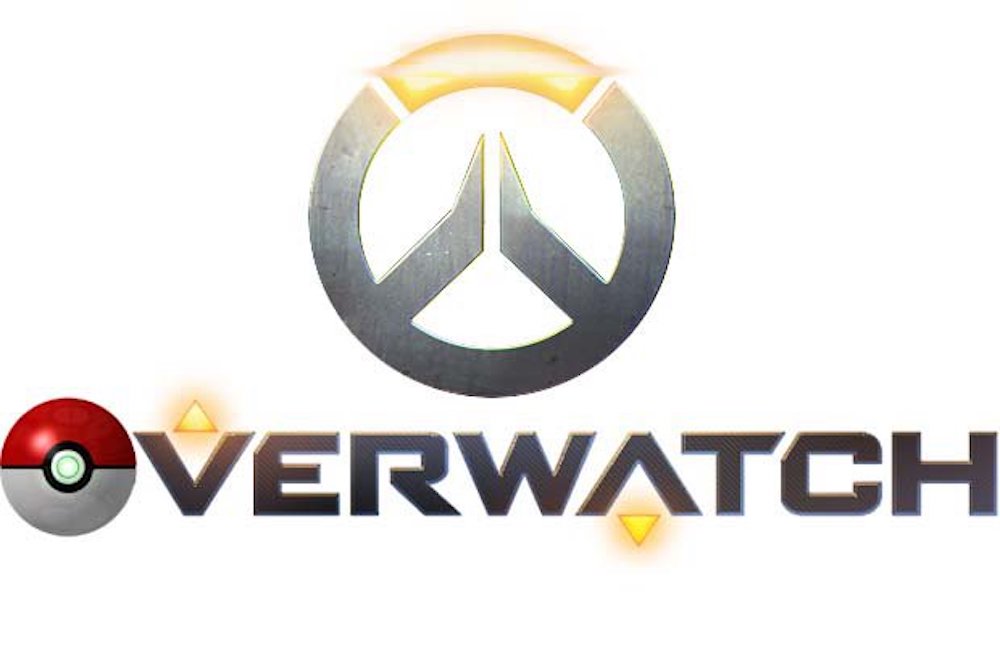 [Submitted through our community blogs, this madness belongs on the home page! -Niero]

Overwatch is the biggest game to come out in a long time, and like most of the internet, I’ve really been enjoying my time with it.  I can’t really talk about the only other game I’ve been playing recently right now, but I can tell you that it’s basically the opposite of Digimon Stop.  The two games have sort of intertwined themselves in my brain, and I thought it might be fun to go one by one through the different heroes of Overwatch and determine which creatures each of them might use.  Both Overwatch and Pokémon feature large casts of diverse, iconic characters, so if nothing else, I think this will be a fun mental exercise.  I’ll be going through three characters each day, starting with Offense and moving on to the Defense, Tank, and Support characters as the week progresses.

Each Overwatch hero will be using Pokémon Stadium rules, and is allowed 3 different Pokémon which will be chosen based on that hero’s personality and attacks in the game.  No hero may have a Pokémon that is owned by any other hero.  I briefly considered coming up with a full team of six for each hero, but decided I’d rather maintain what’s left of my sanity.  Since I limited each hero to three creatures, I had to make cuts to some teams.  As such, there will probably be some creatures that may fit better with a given hero than what I’ve come up with, so if you feel I’ve made a mistake or an omission, let me know in the comments.  Keep in mind that since I decided no hero could share a Pokémon with any other, you may see some that I think fit better for a different hero later in the week.  I’m far from the first person to come up with this idea, so wherever possible I’ll also add artwork with a link back to the creator.  At the end of each section I’ll provide analysis and determine a winner based on that hero’s team.  I haven’t decided who will win ahead of time, so I think it’ll be fun to see who has the advantage based on the type effectiveness and stats of each hero’s Pokémon.

Everyone got that?  Clear as mud?  Tough.  Let’s get going.

Today we’ll start going through the Attack heroes, in order of their appearance from left to right: Genji, McCree, and Pharah.  We’ll continue tomorrow with Reaper, Soldier: 76, and Tracer. 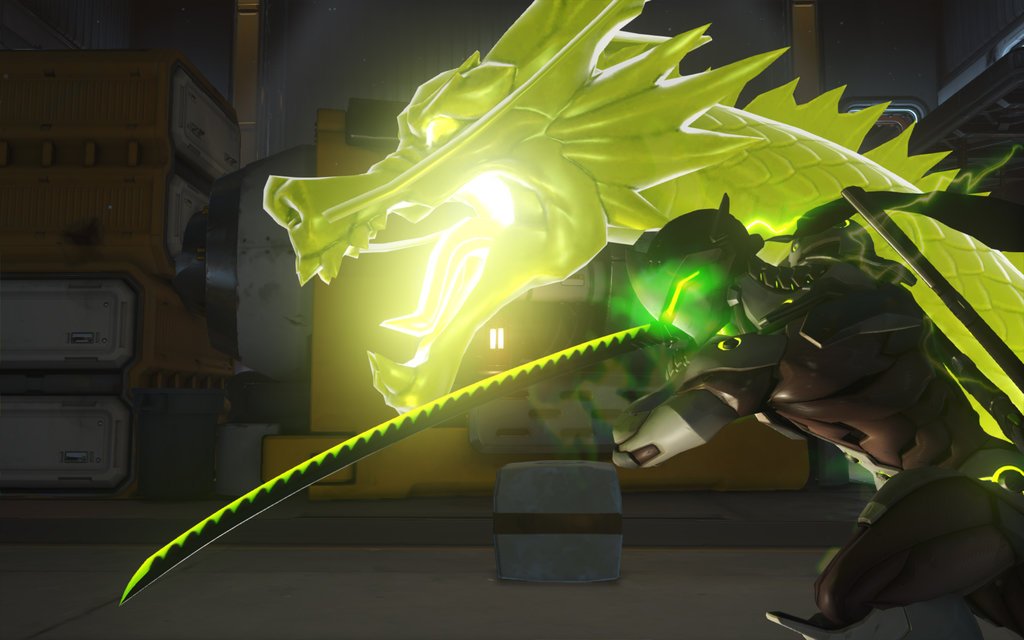 Doing research for this entry was slightly hampered by the fact that the leader of the Elite Four in Pokémon Ruby, Sapphire, and Emerald is also named Genji in the original Japanese.  They… don’t look much alike.

Reason: Putting aside the similarities in their names, Both Genji and Greninja follow the classic ninja archetype, attack with shuriken, and became darker over time.  Genji’s basic attack is to throw three shuriken either at a single point or all at once in a fan pattern.  Greninja’s signature move is Water Shuriken, which hits its target multiple times in succession.  Greninja begins life as Froakie, a Water type, gaining Dark typing after its final evolution from Frogadier into Greninja.  This parallels Genji’s implied backstory: betrayed and left for dead by his brother, Genji was brought back from the brink of death using advanced cybernetic technology, prompting a reevaluation of his priorites, motivations and temperment.  He’s seen things that have changed him, and his path is darker as a result.

Reason: Genji’s cybernetic augmentations have vastly increased his movement speed and reaction time, and he’s the only member of Overwatch that can jump in midair.  Ninjask’s standard ability, Speed Boost causes it to gain speed at the end of every turn.  Not only that, but its visored face closely resembles Genji’s cyber-mask.

Reason:  Genji’s ultimate move, Dragonblade, summons the spirit of an ancient, green, serpentlike dragon to his katana and briefly allows him to move and strike with vastly increased speed and power.  If you hear him shout, “RyÅ«jin no ken wo kurae!”, you’d best hope he’s on your side.  In my opinion, the dragon aura that appears along the edge of the blade resembles Rayquaza more than most other creatures.  Rayquaza is the ancient Pokémon tasked with keeping balance between the elements in the Hoenn region, and its name may be translated as retsu (violent or furious), kÅ« (sky), and za (location) “one that sits in the ferocious heavens”.  Rayquaza was the cover model for Pokémon Emerald, and in the most recent Pokémon games, Alpha Sapphire and Omega Ruby, it learns how to Mega Evolve without needing to hold an item, giving it a huge power boost with little penalty. 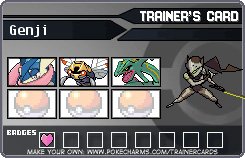 Analysis: Genji has a strong team here, though he’d do well to move Ninjask to his opener and use its Speed Boost along with Swords Dance and Baton Pass to make his other two Pokémon hit harder and faster.  He’s chosen Rayquaza as his finisher, a legendary Dragon/Flying type that is unique in that it doesn’t require a held item to Mega Evolve.  His team would do well against Fire and Ground types, as both Rayquaza and Ninjask are flying types, immune to ground attacks.  Greninja’s water type and Rayquaza’s Dragon type give them both resistance to Fire moves, and they’ll both take half damage from any fire attacks.  Genji will fare more poorly if he faces any Fairy or Rock Pokémon, since Greninja’s secondary Dark type and Rayquaza’s Dragon type share a weakness to Fairy, and both flyers will take double damage from Rock attacks. Since Rock types take serious damage from Water, he may be able to take out a threatening Rock type with Greninja before it can harm his other two, but the lightest rock attack will destroy Ninjask, who has a double weakness to that type.  Rayquaza will also have to watch out for Ice attacks, which deal quadruple damage to it. 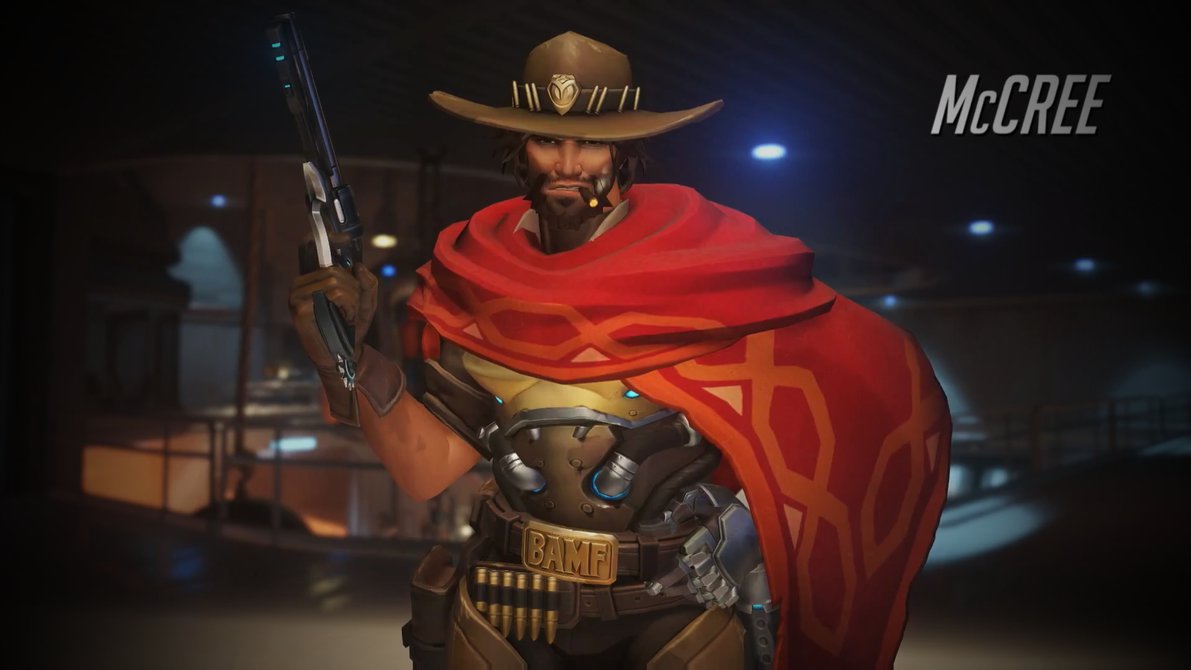 Reason: McCree fits the description of a classic spaghetti western cowboy, right down to the gravelly voice, poncho, and six-shooter.  Ludicolo appears to be wearing a poncho, which I think would draw McCree’s eye.  Despite its duck/pineapple appearance, Ludicolo is a reasonably good Pokémon.  Its unique type combination means that several of the Grass type weaknesses are compensated for, and the Grass type neutralizes the Water type’s weakness to Electric attacks.  Ludicolo, and in fact all of McCree’s team, benefit greatly from maintaining the rain weather effect, so that should be his first move in any engagement.  Depending on the ability, Ludicolo can gain health or double its speed in the rain.

Reason: McCree’s secondary lets him throw a small flashbang grenade that briefly stuns his opponent and keeps them from moving.  Voltorb can learn Spark, an electric type move that has a high chance of causing paralysis.  It would also get a large benefit from the rain Ludicolo set up for it, since the Electric type Thunder move’s accuracy is increased in a rainstorm.  Voltorbs can also self-destruct or explode, making them into small bombs similar to McCree’s grenades.

Reason: McCree’s ultimate is Deadeye, an ability that lets him one-shot anyone foolish enough to remain in his line of sight when he uses it.  McCree announces he’s using this ability by drawling “It”s High Noon”, punctuated by an eagle’s scream and a tumbling tumbleweed.  Octillery was one of the first Pokémon able to use bullet seed, so it makes sense to use this as his closer. 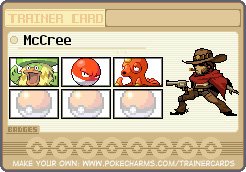 Analysis: Although their boss seems to love High Noon, McCree’s team favors wet weather.  Each of his creatures gain a significant boost from a rainstorm, so opponents who change the weather to something else will have an advantage.  His team will do well against most others, though he may have trouble if an opponent has a strong Bug type to take out Ludicolo before it can set up.  Voltorb can explode to take out squishier targets, and both Ludicolo and Octillery will gain a 15% boost to their water moves’ damage while Rain dance is active. 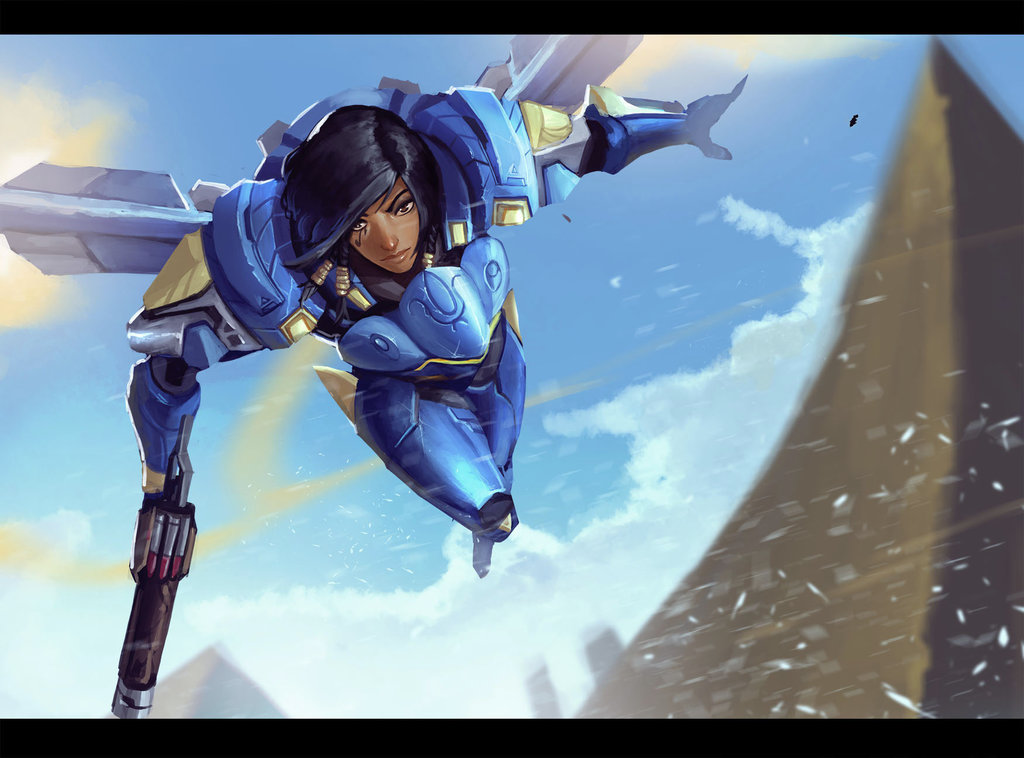 Pharah is a combat veteran, a female soldier of Egyptian descent who wields a rocket launcher and uses a jetpack to give herself a bird’s eye view of the battlefield.  I briefly considered saddling Pharah with creatures who are well known for belonging to members of Team Rocket; Weezing, Arbok, and Meowth.  None of these really fit with what we know about her, though, and in the end I decided to go with a much different set of creatures.  Pharah has limited flight capabilities herself, so it makes sense that she’d choose a team that can keep up with her.

Reason: Pharah’s ultimate move, Barrage, releases a ridiculous number of rockets at whatever’s in front of her.  It does ludicrous damage in a cone in front of her, which is similar to descriptions of a dragon’s breath.  Charizard is a classic Pokémon, one of the very first, and it changes its secondary type from Flying to Dragon when it Mega evolves into Charizard-X.  It doesn’t hurt that the black and teal color scheme happens to match Pharah’s default skin pretty well.

Reason: Skarmory is a metal bird with a can opener for a head that specializes in tanking enemy teams.  All flying Pokémon share an immunity to Ground and a resistance to Fighting attacks.  The steel type means that Flying’s normal weakness to Rock and Ice are nulified, so Skarmory’s only weaknesses are Fire and Electric attacks.  It also looks quite a bit like Pharah as she drifts above a battle in her heavy combat armor and jetpack.

Reason: Pharah’s name comes from the word Pharaoh, another way of referring to the god-kings of ancient Egypt.  Cofagrigus seems to be a Sarcophagus haunted by the ghost of one of these ancient kings.  Pharah’s secondary attack doesn’t do damage, but pushes people away from the point of impact.  This has the effect of disrupting enemy teams, and can even score eliminations when done near an environmental hazard.  Cofagrigus uses subtle moves that do damage over time or clear status effects, like Will-o-wisp and Haze. It’s better at disrupting an enemy team, forcing a switch or nullifying an advantage. 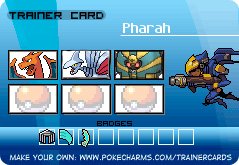 Analysis: Despite its two flying-type Pokémon, Pharah’s team is actually pretty well balanced.  Mega-evolving Charizard early means that its quadruple weakness to Rock type attacks is reduced by half, but it’ll still have to watch out for Rock, Dragon, and Fairy types.  Skarmory is a solid tank that can deal double Steel damage to Rocks and Fairies, making it a very complementary choice to Charizard X.  And Cofagrigus is a wild card, able to switch in against Normal and Fighting types freely, play some tricks, and then switch out.  It’ll have to be careful of enemy Ghost and Dark types, though.

Special thanks to Pokestadium, where I found the Pokémon sprites, and also to Pokecharms for their trainer card macro.  And a big thanks to Curvedlines, who posted all the sprite sprays for the Overwatch heros.

That’s it for today.  Check back tomorrow as I finish up the Attackers.