We got our hands on the newly announced Rainbow Six: Siege last night at E3, letting us play the exact same 5v5 SWAT team house siege that we saw in the Ubisoft E3 briefing demo. If you’ve seen it, you know how it plays out. But after playing both sides — SWAT team and hostage takers — I appreciate what they’re doing even more. 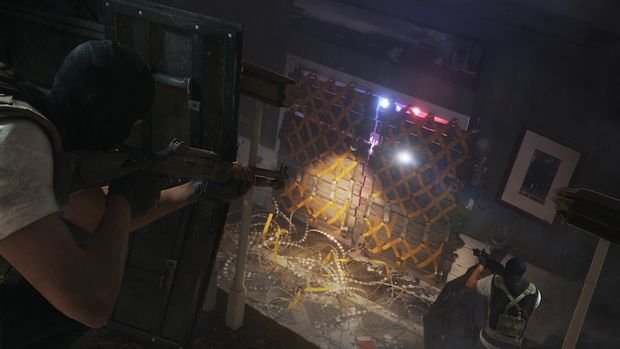 I first played on the defending team, working to barricade a house to contain our hostage and keep the SWAT team out. Walking up to windows and holding down the A button when prompted barricaded windows. Triggers let us throw down barbed wire traps. We also put up barricades that help protect against gunfire as the weaponry can easily blow throw unprotected zones. In fact, early on in the match, one of my team mates was taken out with a single shot that went through a wall and straight into his body. While the fortifications can be placed just about anywhere, being smart with their placement and the allotted time is key to holding off the SWAT team.

Teamwork is the name of the game on either side of the game, but seems to be a bit more important on the defending side. We had to communicate to decide where we would put up our defenses, working quickly to set things up before the counter ran down. We found that having one boss coordinating placement helped greatly. Despite some hasty choices, we managed to hold them off by protecting one back room on the second floor of the home. The tight spaces and blind corners made defending tough, but we made it. 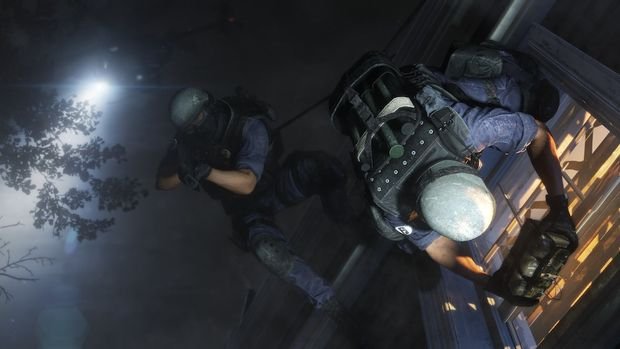 Later, on the other side, playing as the SWAT team, I was able to send in a drone to scope the place and see what kind of defenses they set up. The entire team is able to do the same thing, but only for a minute. When the time was right, we stormed in, crashing through upstairs windows to work our way into their highly defended back room. With the possibility for friendly fire damage, and with the high number of traps and blind corners, things stayed mostly quiet for most of the match. But our point man screwed up and half of us were taken out in a formation with a grenade. Again, as with the other side of the game, communication is everything.

I really got into how the tight spaces and short round times made for some pretty tense and exciting gameplay. Laying down explosive charges, working around traps, communicating to outmaneuver the opposition — all of that came naturally. It feels like something you could go back into dozens of times and try different ways every time.

We played a few rounds, but I could have played many more.

Tom Clancy’s Rainbow Six Siege will be available in 2015 for PS4, PC, and Xbox One.